SAGIT Research Snapshot S0311: Cost-effective doubled haploids for accelerating wheat and oat breeding FAST FACTS
In a nutshell
The project successfully regenerated wheat doubled haploids
The details
using technology similar to that used for commercial barley Start: September 1, 2011 Finish: August 30, 2014
breeding. This is the first time such high levels of regeneration Project participants: SARDI - Dr Phil Davies, Dr
have been achieved using this method in Australia. The project Parminder Sidhu. also successfully regenerated oat doubled haploids at levels
The problem
far greater than previously achieved. Doubled haploids (DH) plants can decrease the time to produce new varieties by three to five years, producing However, these methods have been labour intensive significant economic gains for the industry. Current and costly, resulting in a reduction in the number of methods are labour intensive and costly which has seen doubled haploids used in wheat breeding. For oat a decline in adoption of the technology. breeding, doubled haploid technology is not yet efficient enough for commercial use. The research
The aim was to develop more efficient and cheaper methods for doubled haploid production in wheat and oats using the isolated microspore culture (IMC) RESEARCH AIMS
technique. For wheat, the aim was to develop a method This project aimed to develop techniques to deliver as efficient as that used for barley. For oats, the aim was more efficient and commercially viable production of to develop a method efficient enough to develop wheat and oat doubled haploids. doubled haploids for the National Oat Breeding IN THE FIELD
During the course of the project, more than 4000 BACKGROUND
wheat spikes were cultured in experiments designed Doubled haploid technology creates efficiencies in to achieve maximum growth and plant regeneration. plant breeding by bypassing the natural sexual reproductive process. Wheat doubled haploids have In addition, 4000 oat panicles were cultured in been used since the mid-1990s, primarily using a experiments designed to achieve maximum growth technique crossing wheat and maize. Doubled and plant regeneration. haploid technology allows cereal varieties to be released three to five years earlier than using conventional methods. RESULTS
A method for doubled haploid production in wheat
Since 1997, seven barley varieties and 11 wheat that produces plants at a similar frequency to the varieties have been released by Australian doubled barley method has now been successfully developed haploid laboratories and breeding programs to and two breeding populations have been provided to deliver significant gains to the grain industry by the breeding companies. For oats, the level of plant early adoption of significant yield-bearing traits. 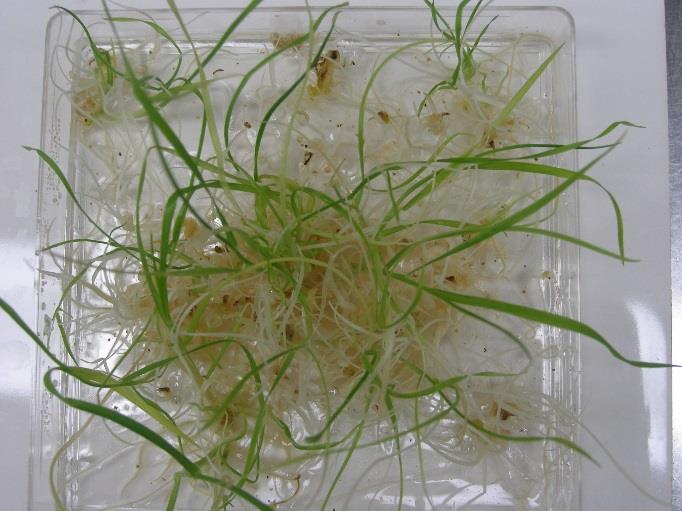 regeneration has been improved but is still only around 20% of the level for wheat and barley.  The level of spontaneous chromosome doubling in wheat is 20%, which is much less than that of barley, which is around 70%. Therefore chemical doubling using colchicine is essential.  The costs of wheat doubled haploid production using isolated microspore culture (IMC) were compared to the wheat x maize and the barley IMC method. Wheat plants regenerating successfully from  The cost of a wheat doubled haploid plan isolated wheat microspores produced using IMC is around 45% of the cost of a wheat doubled haploid produced by the wheat x maize method. VALUE FOR GROWERS
 The cost of a wheat doubled haploid  Improvements in plant breeding technology produced using IMC is 15% higher than the can lead to producing disease resistant cost of barley because of the additional varieties that require fewer fungicide chromosome doubling step required. applications, more weed-competitive varieties that require less herbicide and varieties that require less fertiliser inputs due to efficient  Barley ovaries significantly increased the proportion of oat microspores that will grow  All of these outcomes can be accelerated to form colonies. through the use of doubled haploid  Consistent levels of plant regeneration are not possible without the addition of 1%  Successful methods now exist for the creation activated charcoal. of wheat and barley doubled haploids for  There is a high level (85%) of spontaneous commercial plant breeding. doubling in regenerant plants.  Improvements have been made to the oat doubled haploid technology but further work Unfortunately, despite this project making significant would be required to make this commercially improvements to wheat and oat doubled haploid technology, the benefits cannot be realised in the  Unfortunately, due to cost pressures, the current economic climate. The economics of doubled technology is unlikely to be adopted widely in haploid implementation are no longer favourable. the current climate. However, it has now been However, two populations of IMC derived doubled developed and is available should plant haploids have been delivered to Longreach Plant breeders choose to adopt it. Breeders and Australian Grain Technologies. The methods developed in this project will be More information:
published in scientific journals so they can be Dr Phil Davies
implemented if the economic climate becomes SARDI Senior Research Scientist
favourable for their adoption in future. T: 08 8303 9494
E: [email protected]
SAGIT DISCLAIMER: Any recommendations, suggestions or opinions contained in this communication do not necessarily represent the policy or views of the South Australian Grain Industry Trust (SAGIT). No person should act on the basis of the contents of this communication without first obtaining specific, independent, professional advice. The Trust and contributors to this communication may identify products by proprietary or trade names to help readers identify particular types of products. We do not endorse or recommend the products of any manufacturer referred to. Other products may perform as well as or better than those specifically referred to. SAGIT will not be liable for any loss, damage, cost or expense incurred or arising by reason of any person using or relying on the information in this communication. CAUTION: RESEARCH ON UNREGISTERED AGRICULTURAL CHEMICALS USE. Any research with unregistered pesticides or of unregistered products reported in this communication does not constitute a recommendation for that particular use by the authors or the author's organisations. All pesticide applications must accord with the currently registered label for that particular pesticide, crop, pest and region. Copyright All material published in this communication is copyright protected and may not be reproduced in any form without written permission from SAGIT.