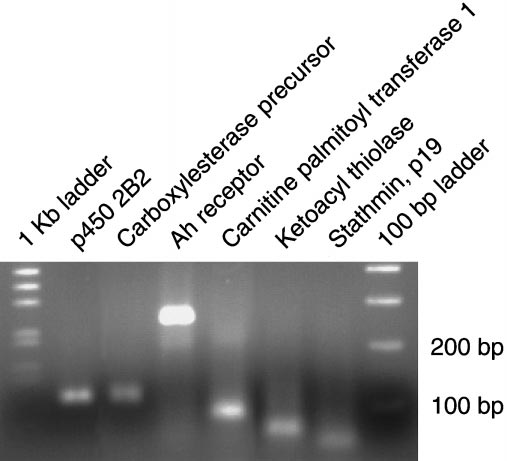 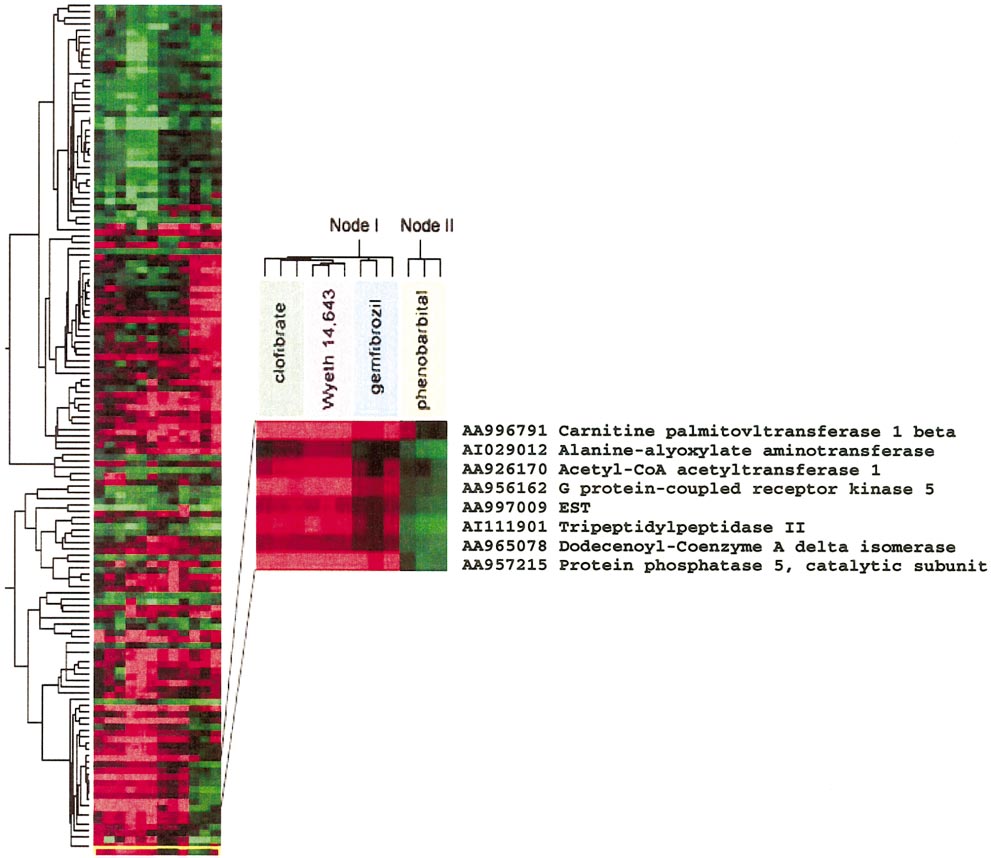 HAMADEH ET AL.
Different class compound toxicants generate discrete gene expression profiles. Genes whose expression profile was significantly altered in any toxicant-exposed animal at the 24-h time point were clustered according to their expression levels across animals. Samples were also clustered based on thepattern of expression of the studied genes. A node is highlighted showing the expression pattern of a subset of genes representative of the overall grouping ofsamples derived from the livers of chemically exposed rats.
opposed to pooling, allowed for the detection of interanimal There is high concordance of the expression changes found differences. This facilitated the testing of the robustness of in the microarray analyses in phenobarbital-exposed rats with DNA microarray technology and pattern recognition algo- the results obtained by scientists using other methodologies rithms to generate distinguishable gene expression profiles, over many years of study. This concordance is illustrated in a despite the existence of differences in response across similarly display for gene expression changes in the form of an "effector treated animals. Although we have observed similarities as pathway map" (EPM) for chemical action. The phenobarbital high as about 90% between animals exposed to the same gene expression profile data set was mapped into previously agents, this similarity showed chemical dependence, reaching defined cellular response pathways to demonstrate the infor- about 80% with some of the compounds. The best interanimal mational power of this type of data presentation (Fig. 7).
correlation was observed among Wyeth 14,643-treated ani- Organization of data in this integrated diagram facilitates clear mals, where we saw the greatest number of statistically signif- visualization of regulatory and molecular events occurring as a icant gene expression modulations, suggesting that compound response to chemical exposure and visualization of pathways potency may be positively related to decreased variation in that were affected by phenobarbital. At a glance, this diagram gene expression response.
illustrates how the gene expression profile data has corrobo- 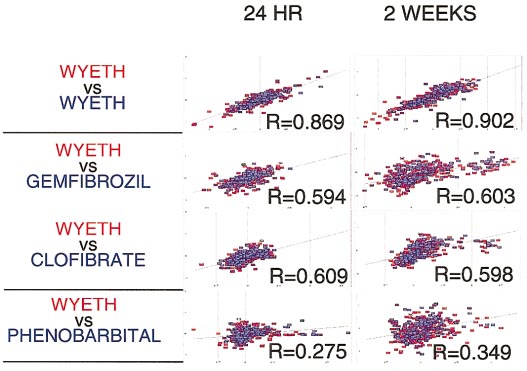 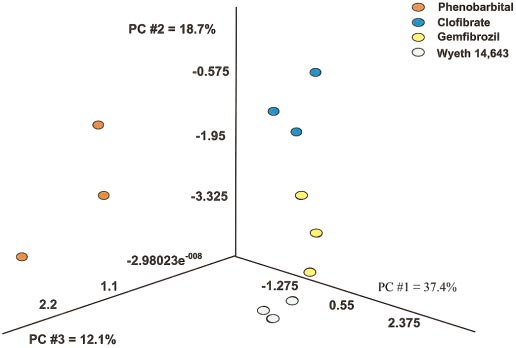 GENE EXPRESSION ANALYSIS AND TOXIC MECHANISMS gene function. The majority of genes that were expressed in atime-independent fashion in response to phenobarbital or peroxi-some proliferator treatment corresponded to enzymes that func-tion in compound metabolism (Fig. 5A; p450 2B2, epoxide hy-drolase 1, GST, aflatoxin B1 aldehyde reductase) or cellbiochemical processes (Figs. 5A–5C; Acyl CoA oxidase, Carni-tine palmitoyltransferase 1, histidine decarboxylase, stearyl-CoAdesaturase). This makes sense when one considers that animalswere treated with the studied chemicals on a daily basis, furnish-ing recurring surges in blood levels of the compounds in theexposed animals, and thus affecting compound metabolism genesor downstream effects.
Metabolism-related genes were notably absent from the tran- siently altered transcripts, the majority of which representedsignaling related genes (Fig. 6A). This is consistent with the The Partek Pro 2000 software package was used for visual PCA transient nature of the response and these genes probably of the data for genes that were altered in a statistically significant manner with constituted an initial response in the liver upon exposure to the any of the treatments used. The first principal component for this data setaccounted for 37.4% of the variation present, the second component for an specific toxicants for the first time. Alterations in gene expres- additional 18.7%, and the third for 12.1%. Each colored point represents data sion that were present at 2 weeks of exposure but not at the from an individual animal treated with the respective agent for 24 h.
24-h time point (Fig. 6B) constituted delayed responses totoxicant exposure. These responses could be associated withadaptation events or with the relation to the histopathological rated past findings (Fig. 7, yellow targets) and may contribute observation of hypertrophy noted in all animals treated by new mechanistic insights (Fig. 7, blue targets).
chemicals for 2 weeks. These changes could also be due to Chronic cell proliferation is proposed as a major mechanism overt toxicity that may be manifested in gene expression re- for tumor promotion by phenobarbital (Barbason et al., 1983; sponses but not necessarily detected by histopathological ex- Feldman et al., 1981; Whysner et al., 1996). Histopathological amination until a much longer period of exposure.
analysis indicated liver enlargement at 2 weeks in phenobar-bital-treated animals. Several studies have demonstrated thatphenobarbital induced increases in DNA synthesis in rats andmice of various strains (Busser and Lutz, 1987). Our datacorroborates phenobarbital-induced increase in cell prolifera-tion. Transcript levels for DNA polymerase b, AIRC-SAICARsynthase, cyclin B1, and ARF-like factor (ARL5) were in-creased at the 24-h and 2-week time points, relative to controls,by phenobarbital exposure, indicating increased DNA synthe-sis and liver proliferation. This observation is further supportedby the modulation in cytoskeleton rearrangement-relatedgenes, such as rho-associated protein kinase, which is essentialfor the rearrangement of actin cytoskeleton (Ohashi et al.,2000; Watanabe et al., 1999), suggesting a role for thesealterations in the hypertrophy observed in the livers of theexposed animals. We also observed the upregulation of phos-phoprotein stathmin (p19) at the 2 time points in response tophenobarbital exposure. Phosphoprotein stathmin (p19), whichis abundant in neuroendocrine tumor cells, showed a 15-fold The ratios of exposed to control animals corresponding to tran- script levels of genes whose expression was significantly altered in any greater abundance in newborn than in adult brain and its levels toxicant-exposed animal at the 24-h time point, were compared via set pairwise increased after two-thirds partial rat hepatectomy (Koppel et correlation analysis using Spotfire software (Spotfire, Inc., Cambridge, MA).
al., 1993), suggesting a role in regeneration and growth of Comparison of rats treated with the sample compound showed the highest various tissues. These data support the observation that phe- correlation (Wyeth 14,643-treated animals). Comparison of Wyeth 14,643 with nobarbital produces liver enlargement due to proliferation of either clofibrate- or gemfibrozil-treated animals yielded appreciable correla-tion, which was in agreement with the fact that both of those compounds liver cells and offers new insights on its molecular basis.
belonged to the same peroxisome proliferator class of toxicants. The correla- Analysis of transient, delayed, and time-independent alterations tion dropped sharply when Wyeth 14,643- and phenobarbital-treated animals suggested a relationship between the pattern of expression and were compared, and indicated poor correlation. 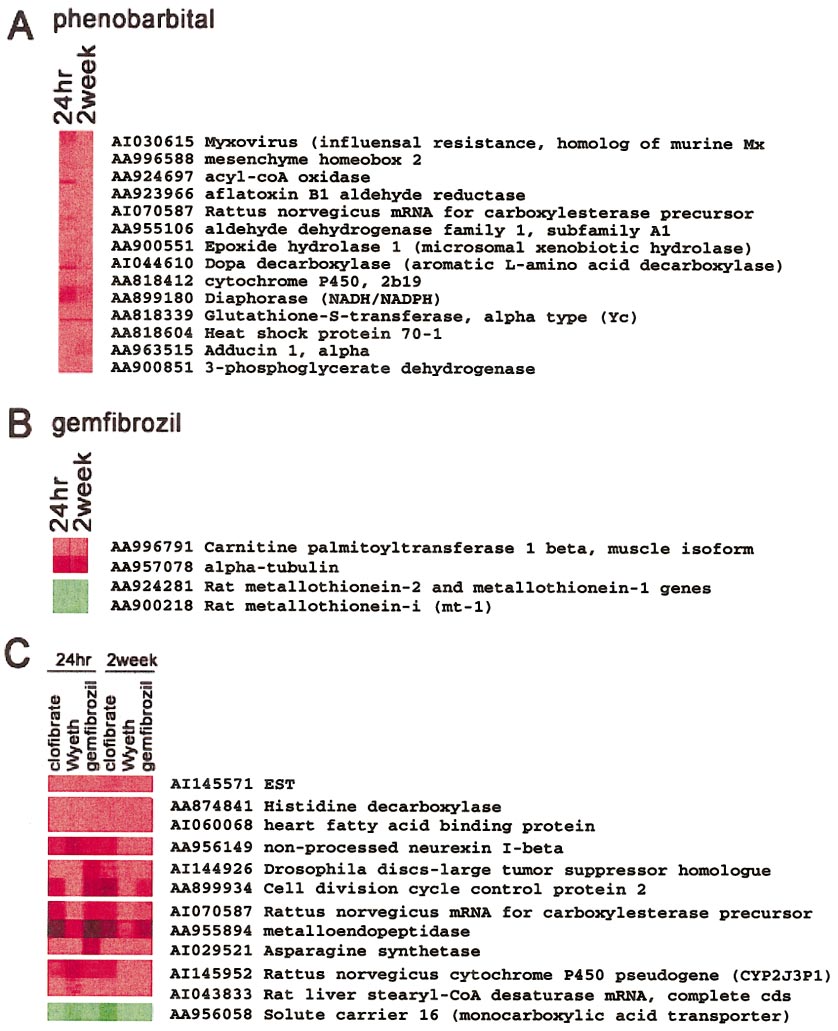 HAMADEH ET AL.
Two-dimensional, hierarchical clustering analysis of genes that were altered in a statistically significant manner at 95% confidence level in at least 2 of the replicate hybridizations performed on each sample. Data from 9 hybridizations, representing 3 replicates of 3 independent biological samples derived from rats treatedwith the same compound at each time point, were averaged, and those values were used for clustering analysis. Clustering analysis was performed across genes but notanimals. Genes are represented on the vertical axis while animals are on the horizontal axis. (A) Highlighted nodes from a hierarchical clustering tree, showing a suiteof genes whose transcripts were increased in phenobarbital-exposed animals over controls in a time-independent fashion. (B) Genes modulated by gemfibrozil treatmentin a similar fashion at 24 h and 2 weeks of exposure. (C) Nodes showing different genes that were modulated by peroxisome proliferators collectively in atime-independent fashion. Red, gene induction; green, gene repression in the treated samples, relative to control.
We have successfully generated gene expression profiles cals from the same class of compounds give rise to discern- for 3 peroxisome proliferators and an enzyme inducer, and able gene expression profiles that bear more similarity to we were able to show, through the application of pattern each other than to patterns corresponding to exposure to recognition algorithms and computational analyses, that compounds from a different class. Systematic development these patterns were distinct. We demonstrated that chemi- of an expanded database for gene expression responses to 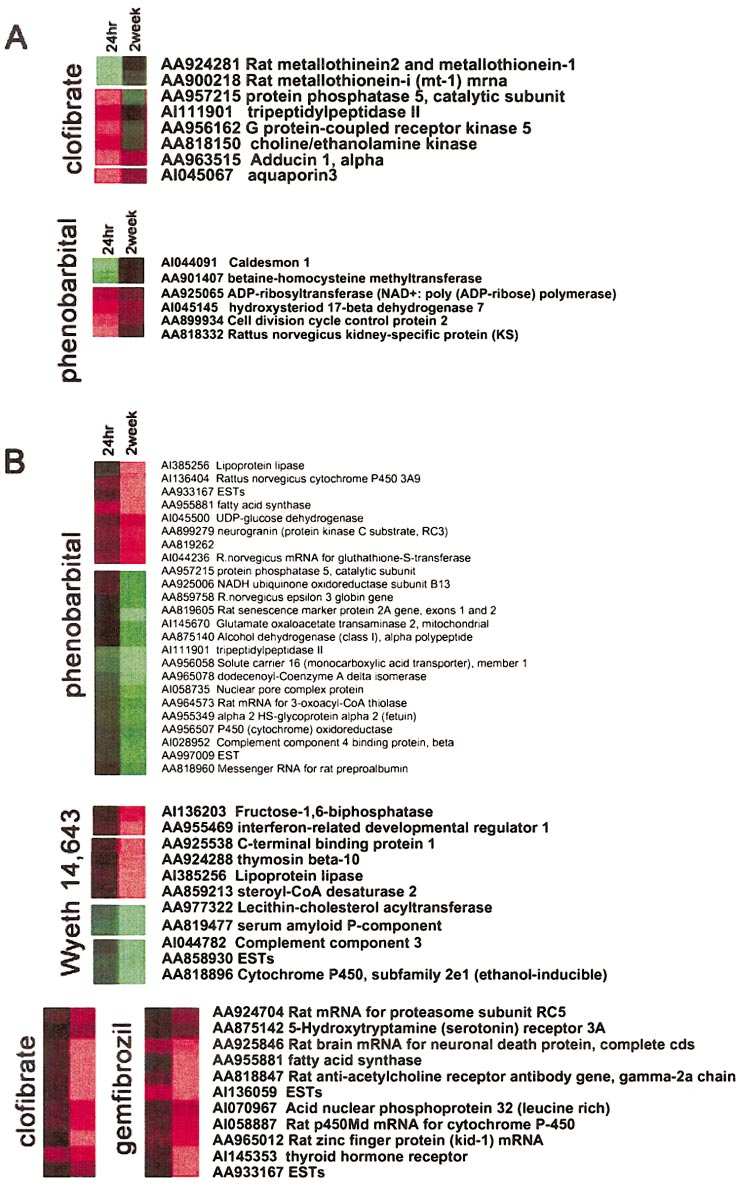 GENE EXPRESSION ANALYSIS AND TOXIC MECHANISMS Illustration of transient ver- sus delayed responses in gene expres-sion. Nodes from 4 hierarchical cluster-ing trees corresponding to the chemicalsused in this study were highlighted toshow examples of (A) transiently alteredtranscripts or (B) genes that required adelayed period of time for up- or down-regulation, implicating those genes aspossible biomarkers of toxicant-associ-ated delayed toxicity or adaptation to ex-posure. Red, gene induction; green, generepression in the treated samples, relativeto control.
drugs and environmental pollutants may yield compound- cals that we utilized. In addition, our data revealed gene specific signature patterns that would also provide insights expression that has not been previously associated with the into affected regulatory and proliferative and repair/adap- compounds we used and suggest that such results will tive pathways. We demonstrated the validity of our expres- provide valuable targets for further investigations of the sion data by corroborating published reports on the chemi- mechanism of action of chemical hazards. 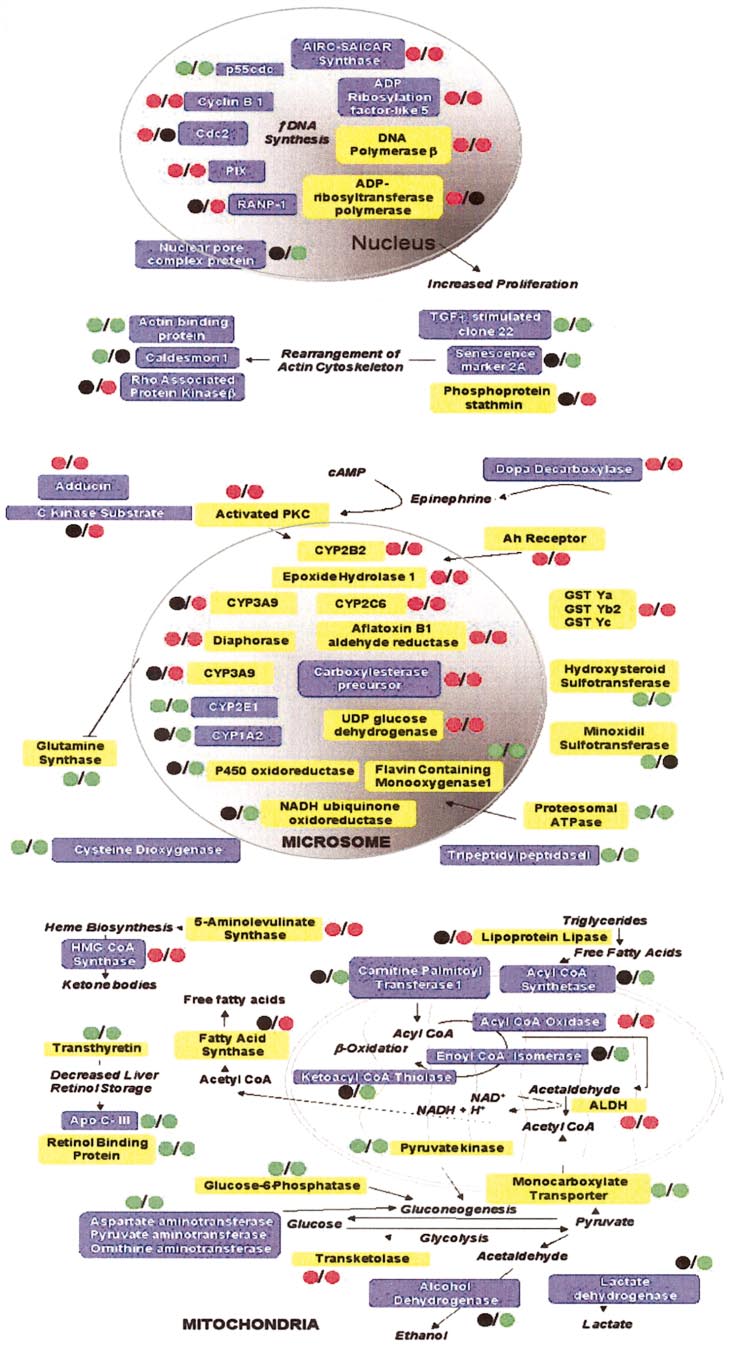 THE INFORMER INFORMATION BULLETIN OF THE ISLAND GOVERNMENT OF ST. EUSTATIUS Volume 1, Issue 2 OCTOBER ISSUE , 2009 Dutch civil servants supporting transition St. Eustatius– The Dutch civil servants of the Ministry of Traffic and Water Management visited their local counter-parts on Tuesday September 8th 2009, to discuss Air Traffic Control, Air Space and Airport Development after the tran-sition. One of the topics was the condi-tion of the servicing of the landing strip. This point needs priority in the master plan. Another issue which has the at-tention is the airlift to and from the is-land. A market scan for airlift is in the making. During their visit they met with, Planning Officer, Mr Maldwyn Timber, of Planning, Mr. Ellis Schmidt, Airport Manager, and the Executive Council. The Airdrome will remain a responsibility of the Island Government. They discussed navigation aids, airspace and airport developments . The agree-