Achieving effective outcomes
in patients with overgranulation
Jackie Stephen-Haynes RGN DN DipH BSc (Hons) ANP. PG DipR PGDip Ed, Masters in Clinical Nursing
Consultant Nurse and Senior Lecturer in Tissue Viability for Worcestershire Primary Care Trusts and University of Worcester. Stourport Health centre, Worcester St, Stouport on Severn, Worcestershire.DY13 8EH Sylvie Hampton MA BSc (Hons) DpSN RGN,
Tissue Viability Consultant, Tissue Viability Consultancy Services. Eastbourne WCA UK EDUCATION
Introduction
Many factors will delay wound healing (Hampton & Collins 2003), overgranulation is one of these factors that can delay
the wound healing process and can lead to a chronic wound.
Chronic wounds present tremendous challenges to the The healing process associated with an acute wound is a dynamic healthcare team. Unlike acute wounds that usually progress one which can be divided into three phases (Dealey 2007): neatly in a timely manner through the inflammation, • Inflammation
proliferation and maturation phases of the healing process, • Proliferation
chronic wounds deviate from this predictable sequence of regeneration and repair (Krasner 1995) and more recently there has been increasing evidence for the effective treatment of over-granulation.
Stage of Inflammation
Overcoming the problem of overgranulation is difficult for health Inflammation occurs immediately at the moment of tissue care practitioners who need to assess the condition of the damage, lasts a few days, five at most, and is the body's natural granulation tissue to achieve good clinical outcomes for patients.
response to injury. As soon as the injury occurs the blood vessels in the wound bed constrict and a clot is formed. In order to understand overgranulation, we must first Once bleeding is halted, the blood vessels then dilate to allow understand the wound healing process and therefore, the essential cells; antibodies, white blood cells, growth factors, aim of this booklet is to provide information on the healing enzymes and nutrients to reach the wounded area. Because the process and to describe how a wound becomes chronic and vessels have dilated, fluid (exudates) can now easily leak out colonised, providing a background to why a wound becomes into the wound bed (Enoch & Price 2004; Enoch 2006). At this over-granulated, how to avoid its occurrence and how to treat stage neutrophils and macrophages commence their protective it once it is established. role and begin the orchestration of wound healing, moving Achieving effective outcomes for patients with over-granulation onto proliferation and it is this stage that chronicity can be is possible and clinicians need the skills of assessment, established, particularly if the wound becomes colonised or is differential diagnosis, knowledge of the evidence to support not treated appropriately. If chronic inflammation occurs, then modern treatments and good communication skills to explain there is a potential for future overgranulation. Certainly, chronic this clearly to the patient.
inflammation will prevent the second stage (proliferation) from occurring (Moore 2004).
The wound healing process
Stage of proliferation
There is a great difference between chronic wound healing and acute wound healing and they are not interchangeable. An acute The restoration of tissue and the redevelopment of tissue wound will heal, without problems, in an orderly fashion unless strength following wounding are initially achieved by the the underlying pathology is not supportive of healing or the formation of a myofibroblast-reticulin matrix which eventually wound becomes clinically infected (Dealey 2007). The wound disappears as the healing wound ages (Forrest 1982). At this that does not heal in the normal way will become chronic and point, the wound begins to fill and the new collagen fibrin will then require art (knowledge and experience) and science matrix is used by capillaries and cells as a ‘scaffolding' to build (knowledge of research outcomes) in order to bring the wound the new tissue. This building tissue contains macrophages, back into the acute stage ready for healing.
fibroblast cells, and newly formed blood vessels, with a complex WCA UK EDUCATION 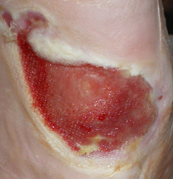 collagen protein matrix. At this point, macrophages are probably the most important of the mediators of wound healing as they emit growth factors which attract fibroblasts and so initiates the next phase of wound healing. The cells multiply within the matrix and fibroblasts in the granulation tissue "pull" on the matrix, causing the wound to contract, enabling the wound to move to the third stage - maturation. If clinical infection occurs at this point, the wound can develop a chronic inflammation and this inflammation can lead to tissue damage if it lasts too long (Midwood et al 2004) and it is this that will prevent the wound from continuing the healing process. Although this has been simply explained here, chronicity is actually extremely complex and the subsequent chronic inflammation leads Matrix Metalloproteinases (MMPs) (which are so necessary to acute wound healing), to become a Figure 1. Granulation has smoothed out; the wound is just slightly moist and damaging force in the chronic wound and therefore, will delay is ready for the edges to contract. The stage of healing is maturation. wound healing even further and prevent the wound from progressing to the stage of maturation.
These 3 stages should progress in an orderly (orchestrated) manner although the stages will overlap as can be seen in figure Stage of maturation
2: This phase lasts 3 to 5 days When granulation is achieved, the wound bed changes, becomes less ‘wet' and less ‘bumpy' with a smoother wound surface (figure 1). This is the final stage of wound healing and the epithelial cells can now grow into the centre of the wound and the wound fibres will contract the surface of the wound until it reaches closure. If this happens quickly there will be less scarring (Son et al 2005). The collagen that is laid down during the granulation period is now removed and replaced by a stronger collagen and the tissue beneath the scar and the scar itself, will go on remodelling for up to two years (Dealey 2007).
Figure 2 The 3 phases of wound healing. Each stage overlaps the previous stage and, if unable to pass from the acute phase will become chronic inflammation without healing.
WCA UK EDUCATION 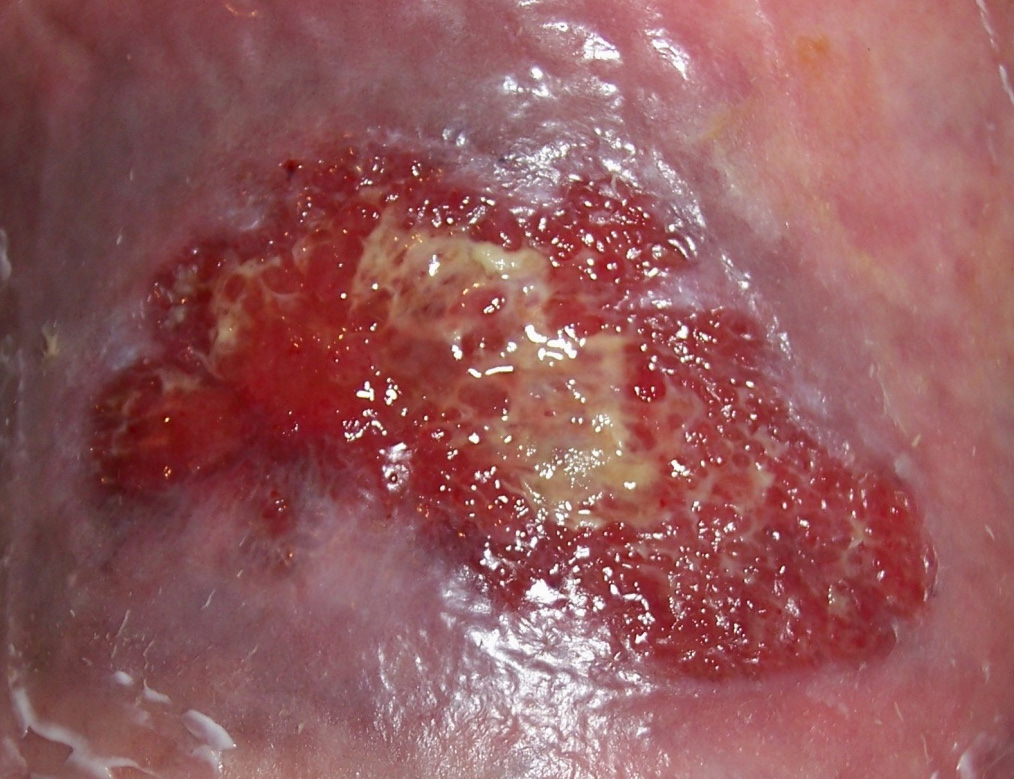 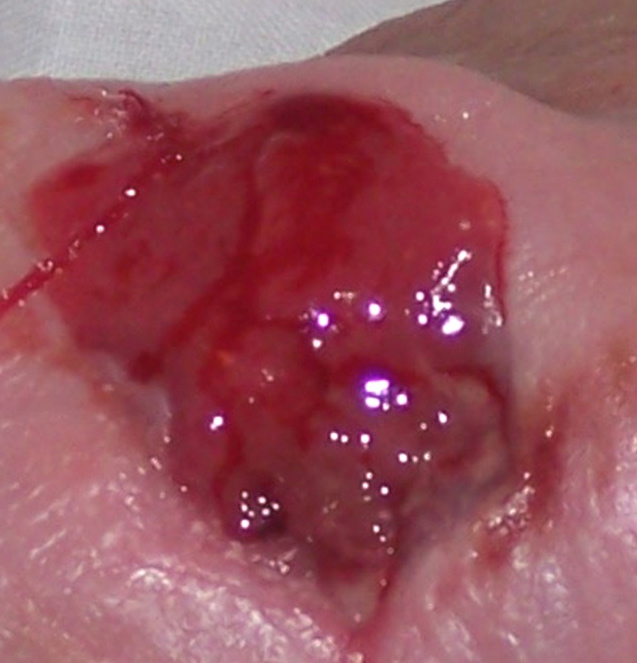 If a problem, such as clinical infection occurs, then the wound of required granulation tissue needed to replace the tissue can ‘stick; in the 1st stage and this will then become chronic deficit which often results in a peduncle (raised mass) above the inflammation and the wound dynamics will change and the wound (figure 4). It may be a difficult condition to manage and wound will halt healing.
the presence of such tissue, as well as increasing the patient's risk of infection, will prevent or slow epithelial migration across the wound and thus delay wound healing (Nelsen 1999).
Granulation tissue itself is composed largely of newly growing capillaries (angiogenesis) and is so called because the irregular surface is created by the capillaries looping together on the wound surface, giving the appearance of red lumps (or granules) throughout paler pink normal matrix. The appearance Figure 4. Overgranulation is a soft tissue that is ‘proud' of the wound (Peduncle) and minus the granules that represent granulation tissue. It will not progress toward healing.
Overgranulation is also known as hypergranulation, exuberant Figure 3. Granulation tissue consists of a pale base of matrix granulation tissue, or proud flesh and usually presents in and many capillaries looping together on the surface, forming wounds healing by secondary intention. It is clinically recognised ‘lumps' that have the appearance of granules.
by its' friable red, often shiny and soft appearance that is above is granular (figure 3), and naturally has the name granulation. the level of the surrounding skin (Johnson & Lea 2007) and If granulation is present in the wound it is an indication that can be healthy (figure 5) or unhealthy (figure 6) tissue (Harris healing is occurring and a dense network of capillaries, a high & Rolstad 1994). There is some thought that this problem is number of fibroblasts, macrophages and new formed collagen associated with oedema of granulation tissue and this oedema fibres will be present (Vuolo 2009).
may be associated with occlusive dressings that do not allow drainage of wound exudates (Vandeputte & Hoekstra 2006).
The oedema would be increased in the presence of bacterial However, sometimes the granulation will ‘over grow' beyond loading in the wound, whether that loading is associated with the surface of the wound and this is called ‘Proud Flesh', colonisation or with clinical infection. This oedema could ‘hypergranulation' or ‘overgranulation'. Overgranulation is possibly be seen as a ‘healthy' overgranulation (figure 4) which is defined as an excess of granulation tissue which is in excess different to ‘unhealthy', infected and friable overgranulation.
WCA UK EDUCATION 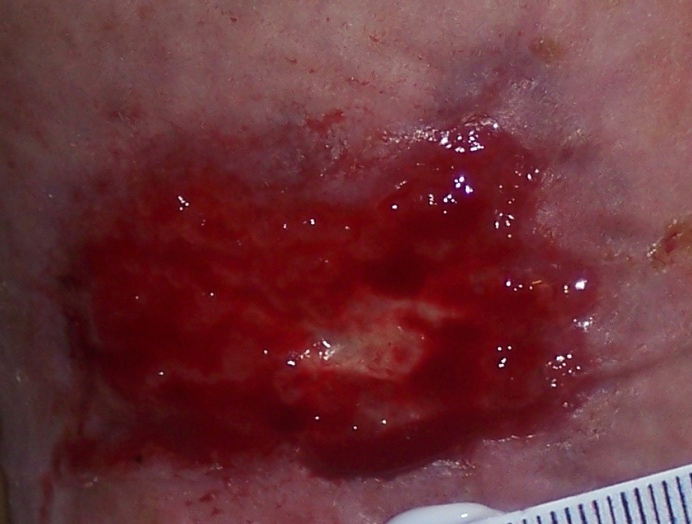 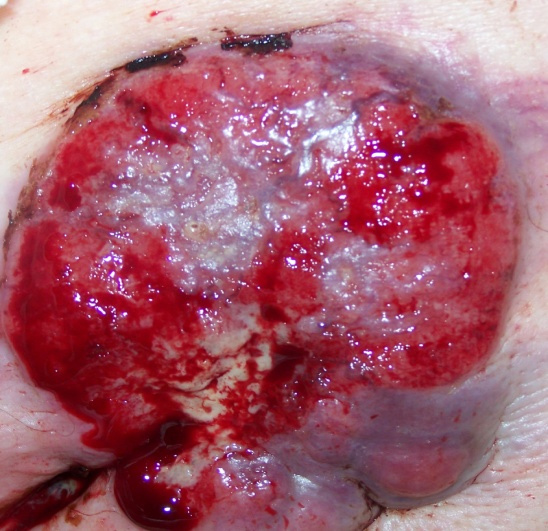 However, whether healthy or unhealthy, the wound generally Healthy overgranulation tissue presents as an overgrowth of will not heal when the tissue is ‘proud' of the wound because moist, pinky-red tissue (figure 5) that may bleed easily (Johnson epithelial tissue will find it difficult to migrate across the surface & Lea 2007) and unhealthy overgranulation tissue presents as and contraction will be halted at the edge of the swelling.
either a dark red or a pale bluish purple uneven mass rising above the level of the surrounding skin which also bleeds very easily (figure 6). The healthy granulation tissue has the potential to reduce naturally and to eventually heal without intervention although this may take longer than if it is treated.
Particular care should be taken in differential diagnosis as an overgranulating wound can appear as similar to a malignancy wound, particularly a fungating wound (Harris & Rolstad 1994).
Overgranulation in diabetes
Soft tissue coverage of chronic diabetic ulcers can be particularly
troublesome because of the lack of adequate blood supply
available to the wound and this can form inadequate granulation
tissue (Younes et al 2006). Also, the person with diabetes is very
Figure 5. Healthy granulation tissue. Can be treated with pressure or topical prone to clinical infection in wounds due to the inadequate tape (Haelan tape) steroid cream or ointment.
delivery of oxygen and nutrients to the wound bed which increases the potential for abnormal tissue such as overgranulation.
Possible causes of overgranulation:
There is limited research relating to the cause of over-
granulation with several authors offer several suggestions. These
relate to 3 areas: inflammation, occlusion or cellular imbalance:
• Prolonged inflammation caused by infection or dressing

in Gastrostomy tubes and supra pubic catheter sites (Lyon
& Smith 2001; Hanlon & Heximer 1994).
• Over use of occlusive dressings is thought to have an

STUC and the Boycott Disinvestment Sanctions campaign Our decision to support BDS STUC's decision to promote a campaign of Boycott, Disinvestments and Sanctions against the cott, Disinvestment and Sanctions campaign state of Israel was not taken lightly. Over a period of two years, STUC considered the issues;consulted with Palestinian trade unionists; listened to the views of the Israeli trade unions; andin 2009, organised a major fact finding mission to Israel/Palestine where the delegation spokewith dozens of peace and solidarity organisations. STUC Congress agreed to promote thecampaign in 2009 after agreeing the report carriedon page 15 of this pack.