Case Study : The WHASA Wheel THE WHASA WHEEL – Integrating multiple
specialities in patient management with wound healing
as the common basis
Widgerow AD, MBBCh, MMed(Surg), FCS(Plast), FACS
Private plastic surgeon, Linksfield Hospital, Johannesburg Correspondence to: Prof Alan Widgerow, e-mail: [email protected]
Introduction
There is not a speciality in Medicine that I can think of today where Wound Healing does not impact. The surgical specialities by their very
nature involve the healing of wounds in one form or another, but it is not always appreciated that almost every chronic medical condition
also has associated wound problems. This reality results in an unprecedented amalgamation of medical minds and basic scientists all
contributing to a surge in knowledge related to this relatively new field.
The WHASA (Wound Healing Association of Southern Africa) WHEEL is a concept that has been developed to demonstrate the impact of interspeciality co-operation for the ultimate benefit of the patient. This article, by means of a hypothetical case, attempts to demonstrate this co-operation and to highlight esoteric situations that arise when considering wound healing among the different fields. It is by no means exhaustive of surgical scenarios but merely representative of fairly common situations that any of us could encounter on a daily basis.
The article takes the form of a case report which is interspersed with ‘wound healing' discussions that I have added under the heading ‘WHASA background comments'. In addition invited comments from our esteemed col eagues that make up the components of the WHASA WHEEL are included within the text.
Wound Healing Southern Africa 2008;1(1):07-14
Case report
bleeding, debridement of the necrotic mesentery, fascia, A 57 year old male patient was seen in Trauma Casualty following peritoneum and muscle and a motor vehicle accident. Initial examination revealed polytrauma thorough washout of the including a head injury, blunt abdominal trauma and a compound abdomen, total closure of fracture of the left tibia. His medical history included that of a type 2 the abdominal wall was not diabetic on oral medication in an otherwise healthy male. possible and the abdomen The patient responded to pain and withdrew in response to pain with was packed and closed incomprehensible verbal responses. He was assessed as a 10/15 with a broad polyurethane Glasgow Coma Scale score head injury but pupils were equal and temporary ‘sandwich' dressing responsive to light. Examination of the abdomen revealed ecchymotic with the intention of returning areas with an underlying tense distended abdomen. Palpation the patient to theatre in 72 hours once compartment confirmed fullness of the abdomen with percussion tenderness. A pressure had reduced and diagnostic peritoneal lavage showed the presence of more 200 000 the patient considered stable RBC/mm3 constituting a positive result for an intra-abdominal bleed. for further surgery. Examination of the left leg revealed an obvious compound fracture Figure 1: Tibial plateau fracture with severed of the upper third of the tibia and a weak pulse in the posterior tibial Comments from WHASA
artery region of the left lower limb. The ankle-brachial pressure index Wheel partner – Trauma
was assessed to be 0.6. Sensation to the foot was intact. surgeon: Prof Ken Boffard
Fol owing initial resuscitation and external reduction and splinting This patient's blood pressure is not recorded. If the patient is stable, of the tibial fracture, the patient was transferred to the operating he would probably get a CT scan of his head, abdomen, and a CT theatre under the care of the trauma surgeon, orthopaedic surgeon angiogram of his leg. If unstable, either the DPL or a FAST ultrasound and a vascular surgeon. A straight X-ray and on-table single-shot would be appropriate. The priorities would be to minimise secondary femoral angiogram revealed a tibial plateau fracture and a suspected brain damage through hypotension, and if there are signs of shock, transected popliteal artery with associated thrombosis (Figure 1). the abdomen takes priority.
Exploration of the abdomen revealed injury to the smal bowel The leg has a tibial fracture, in its upper third. This is generally below the trifurcation, and sensation is intact. This implies that since there mesentery with significant bleeding and pressure necrosis of the are three vessels at this point, and the mechanism of injury is not peritoneal fascia and abdominal wal muscle. Fol owing control of the Wound Healing Southern Africa 2008 Volume 1 No 1 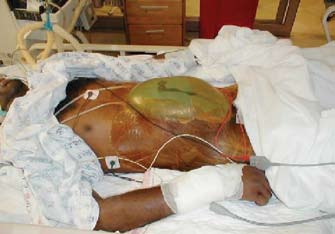 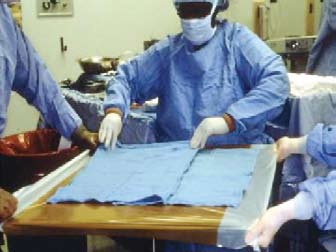 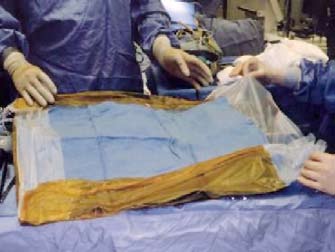 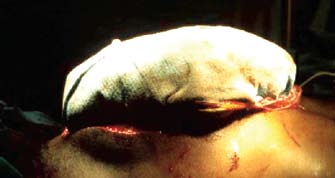 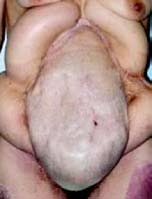 Case Study : The WHASA Wheel Comments from WHASA Wheel partner –
Basic principles involved are the following:
Trauma surgeon: Prof Ken Boffard
1. Creating and preserving the peritoneal space between the Vascular surgeon is correct and timing is appropriate. Orthopaedic abdominal viscera and the abdominal wal preventing adhesions repair should, NEVER in this case be internal fixation, as there would and fistulae.
be too much additional disruption of the blood supply and muscle 2. The space is usual y created with either a temporary prosthetic attachments. This case should be external y fixed as described. The sheet for early closure, absorbable meshes of varying types or vascular repair takes priority over the orthopaedic fixation, but if a non-absorbable bioprosthetic material that is non adherent to necessary, a shunt can be used. External fixation is very rapid (10 underlying bowel where it is felt that fascial advancement and closure wil not occur. Progressive closure of the peritoneal fascia It is mandatory in this case to do a ful four compartment fasciotomy should be attempted in all cases.
through bilateral open incisions which are of adequate length. Almost 3. Wherever possible early closure (within approximately 9 days of certainly, the medial one wil be in continuity with the vascular the initial procedure) should be attempted to encourage success incision. In this case, since there is a col ateral blood supply, it is and prevent adhesions of abdominal wall and mesh.
reasonable to do the vascular repair first. However, in the absence of pulses with absence of sensation, the fasciotomies should be done 4. Negative pressure dressings are used in al the above scenarios before the repair. The popliteal vein should be checked since it is as this wound therapy has lead to the egression of bowel oedema, often damaged as wel . It is critical therefore to preserve the great slow advancement of the fascial edges and early closure of the saphenous vein, as this may be the only viable venous return, and open abdomen.
if vein grafting is required, the vein should be harvested from the Various prostheses are available opposite leg.
for temporary abdominal closure, The use of the VAC on the open fasciotomies is fine, but may be including polytetrafluoroethylene ineffective in the presence of an external fixator.
patch, polypropylene mesh, and polyglactin mesh. They al ow for I don't believe anticoagulation is an issue here. One does not routinely sequential closure when possible, anticoagulate a vascular repair (especial y with the mesenteric provide protection to the underlying ooze, etc). Additional y, we would routinely put this patient on low bowel as well as a method for molecular weight heparin on the day after surgery.
fluid egress, and it al ows for Case report continued
easy abdominal re-entry when necessary.1-4 The patient was returned to theatre at 72 hours fol owing the The prostheses and negative initial procedure. Abdominal compartment pressure had decreased pressure dressing also address considerably but not sufficiently for full abdominal closure. It was the problems of fascial retraction uncertain whether sufficient tissue would be available for full and adherence of the viscera to fascial/muscular closure. As a further interim measure VAC negative the overlying abdominal wall, Figure 5: VAC Dressing to the abdomen pressure dressing was applied (Figure 5). The plan was to return the al owing for continuing attempts at patient to theatre in a further 72 hours – if tissue was deficient for abdominal closure several weeks closure additional materials such as vicryl mesh or acel ular dermis after laparotomy. would be considered for interposition closure. Temporary abdominal wal closure WHASA background comments
techniques in the past have been Negative pressure therapy is intended to create an environment that associated with enterocutaneous promotes wound healing by secondary intention by preparing the fistula produced by erosion of wound bed for closure, reducing oedema, promoting granulation the bowel by overlying dressings. tissue formation and perfusion, and by removing exudate and The major barrier has been lack infectious materials. The concept of leaving the abdomen open of a prosthetic material that can intentional y after laparotomy is an accepted method of management be put directly on bowel without in certain circumstances (such as decompressive laparotomy as eroding and can be inserted into a depicted above). One needs to protect the viscera and al ow for contaminated field. Authors have Figure 6: Skin grafting directly on a simple return to the abdomen at the time of reoperation. In the reported success with aggressive past simple skin grafting of the open area was undertaken with the early closure of the open abdomen resultant herniation needing secondary repair later (Figure 6). using a nonabsorbable biological prosthesis made up of with human acellular dermal matrix (Alloderm, Utilising negative pressure dressings, current data demonstrate Lifecell Corporation, Branchburg, NJ).1 a fascial closure rate of 88%,1 with almost half of these closures In these authors experience most of even the largest defects can occurring at 9 to 21 days after initial operation. Thus the technique easily be closed with just a few sheets because the dermal matrix al ows for the large majority of abdomens to be closed with fewer expands up to 40% of its original size once well hydrated. Successful hernia repairs required. In addition, the technique allows for incorporation of tissue into this prosthesis has been demonstrated.1 successful closure at a significant interval after laparotomy.
Wound Healing Southern Africa 2008 Volume 1 No 1 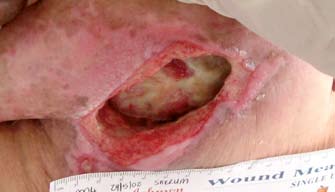 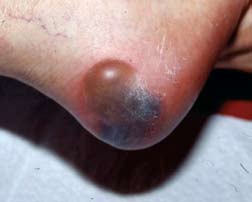 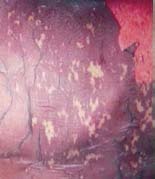