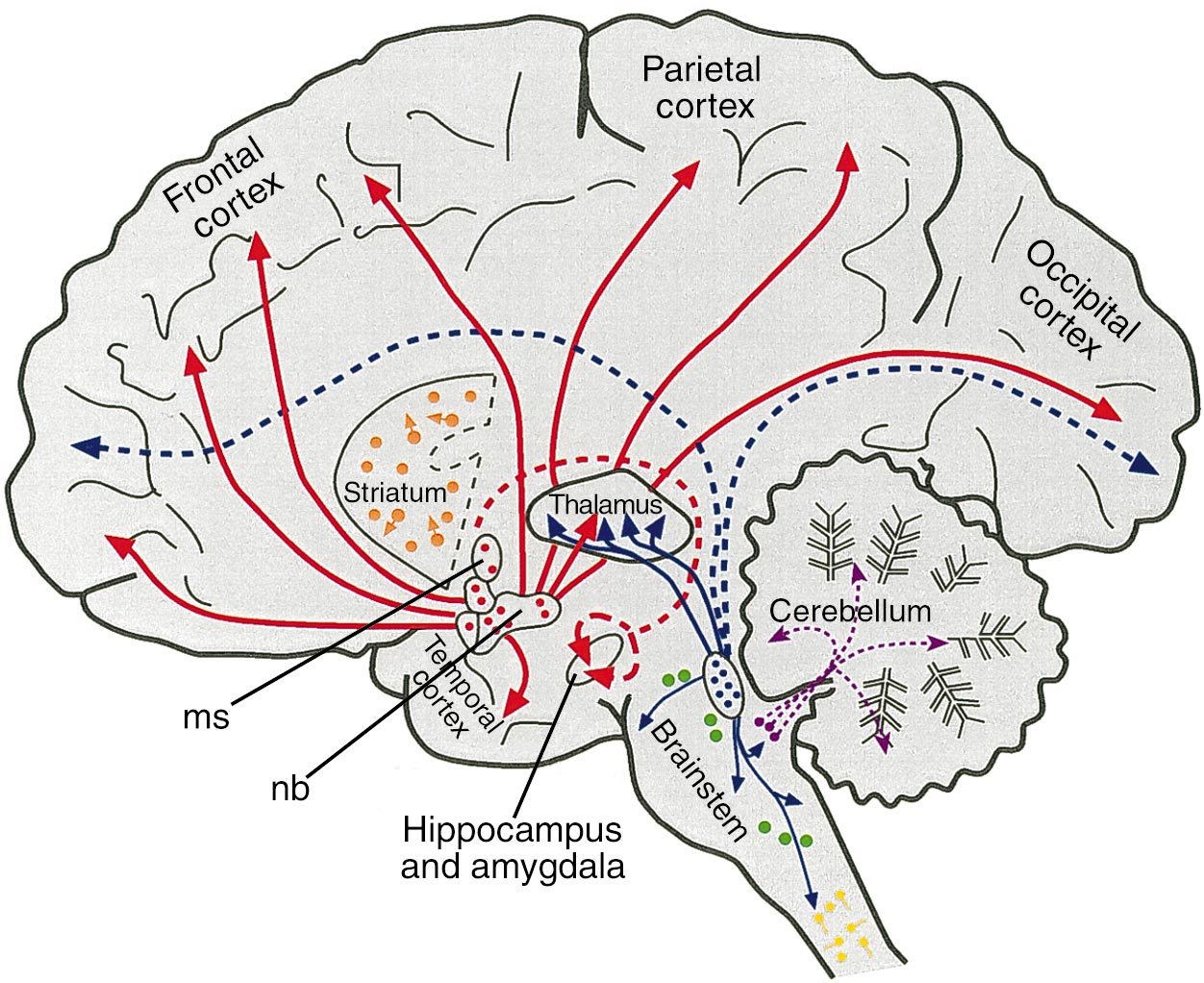 E. Perry et al. – Cholinergic components of consciousness
continued firing of nucleus-basalis cholinergic neur-ones, Buzsaki23 concluded ‘it appears that the ascendingcholinergic system alone is capable of keeping the neo-cortex in its operative mode'. However, the excitatoryglutamatergic input to the nucleus basalis that arisesin the brainstem24, together with the major thalamo-cortical glutamatergic projections, indicate that thecombined actions of ACh and glutamate are essentialin this respect. The consensus view on the role of cor-tical cholinergic projections is that they control selec-tive attention. As Delacour1 has speculated that selectiveattention and consciousness overlap, and Baars25 hashighlighted the importance of selective attention inthe ‘theatre' metaphor of consciousness, the two pro-cesses might share a common neural basis. While atten-tional processes can occur at the non conscious–implicit level, conscious awareness, which representsonly a fraction of cerebral activity at any time, clearlyinvolves a selection process. Current theories of therole of cortical ACh include the possibility that it affectsdiscriminatory processes; increases signal–noise ratios;modulates the efficiency of cortical processing of sen-sory and association information; controls the recep-tion and evaluation of stimuli for their level of signifi- Fig. 1. Cholinergic systems in the human brain. Two major pathways project widely to different
cance; modifies cortical responsiveness in terms of the brain areas: basal-forebrain cholinergic neurons [red, including the nucleus basalis (nb) and relevance and novelty; and confines the contents of the medial septal nucleus (ms)] and pedunculopontine–lateral dorsal tegmental neurons (blue). conscious stream3,26–32. Basal-forebrain cholinergic neur- Other cholinergic neurons include striatal interneurons (orange), cranial-nerve nuclei (green ones project not only to all cortical areas but also to circles), vestibular nuclei (purple); and spinal-cord preganglionic and motoneurons (yellow). A group of cholinergic neurons in the thalamic paracentral nucleus (not shown), thought to select thalamic nuclei, including the reticular nucleus33, project to striatum and visual cortex, has recently been identified in macaque brain101. The which has been implicated in selective attention34.
habenula–interpeduncular pathway is also not shown. Combined retrograde labelling and choline acetyl- transferase immunohistochemical studies have estab-lished that 85–95% of brainstem afferents to most novel patterns and cognitive or motor-skill learning thalamic nuclei, which include specific-relay, nonspe- have, however, been reported to be unimpaired37. This cific and reticular nuclei, originate in the rostral brain- suggests that it is not so much information storage and stem where pedunculopontine cholinergic nuclei and retrieval per se that are primarily compromised in AD, lateral dorsal tegmental nuclei are maximally devel- and that ‘cholinergic correlates' of cognitive impair- oped21. These inputs are excitatory and exert their effects ment might instead be correlates of the degree of un- both directly, via fast nicotinic-receptor mediated and awareness experienced by the patient. Lack of aware- slower muscarinic-receptor mediated depolarization, ness of cognitive impairment is common in AD, more and also indirectly via hyperpolarization of GABAergic so than in vascular dementia38, and is correlated with (inhibitory) reticular neurones35. Co-activation of brain- the degree of cognitive impairment39. Brainstem ped- stem and basal-forebrain cholinergic neurones that unculopontine cholinergic neurones are reportedly project rostrally, which occurs in both wakefulness unaffected in AD (Ref. 40) or modestly reduced (by and REM sleep, provides the thalamus and cortex with 30%)41. The latter finding is not only consistent with a role in integrative modulation of distant neurones the presence of intracellular neurofibrillary tangles but (synchronization) that could represent a component also with the presence of ‘ghost' tangles in this nucleus mechanism of conscious awareness.
(where the cell body is no longer identifiable).
In AD, different pathological manifestations, such Cholinergic neuropathology in mental disorders
as cortical and subcortical b-amyloidosis (which results Abnormalities in the cholinergic system have been in plaque formation), abnormal tau (which results in consistently identified in disorders that affect conscious the development of tangles and dystrophic neurites), awareness, which include AD, PD and DLB (reviewed neuronal and synapse loss, and various transmitter in Ref. 3). The pathology in the nucleus of Meynert, deficits, leave clinical-neuropathological correlations which includes neurofibrillary tangles, Lewy bodies or open to a variety of interpretations. Deficits in cholin- neurone loss, together with deficits in the cholinergic ergic neurotransmission are unlikely to account for the system in the cortex and hippocampus, detected at full spectrum of cognitive and non-cognitive symptoms.
autopsy, and more recently, using chemical imaging36, The situation is less complex in PD and DLB, in which has been linked to cognitive impairment and memory cortical neurofibrillary tangles are much rarer or ab- impairment, and might also relate to alterations in con- sent, and b amyloid plaques are not invariant. In these sciousness experienced by patients with these diseases.
disorders, neocortical deficits in ACh-mediated neuro- In AD, explicit memory is affected more than implicit transmission are generally greater than in AD and yet memory: the latter involves learning of which the cognitive impairments not as severe.
patient is unaware. Loss of explicit memory occurs due Patients with DLB and, to a lesser extent, those to early degeneration in the medial-temporal-lobe mem- with PD experience hallucinations that are primarily ory systems, which are primarily, if not exclusively, in- visual and frequently persistent2. In DLB, neocortical volved in declarative memory. Implicit memory for ACh-related activities (especially in the temporal and TINS Vol. 22, No. 6, 1999 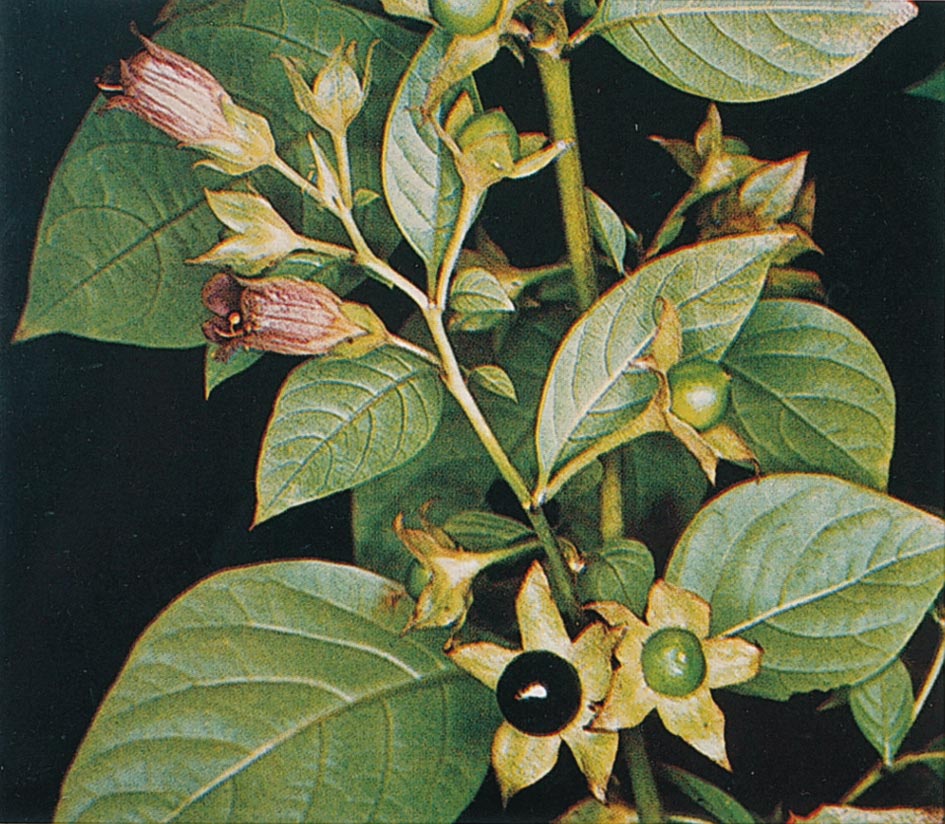 TABLE OF CONTENTS Copyright © 2013 Guthy-Renker LLC. All rights reserved. No part of this book may be reproduced in any form without written permission from the publisher. You may have been plagued with pimples in high school and now are watching history repeat itself through your teenage son or daughter. Or perhaps now, as an adult, you are experiencing breakouts for the first time.