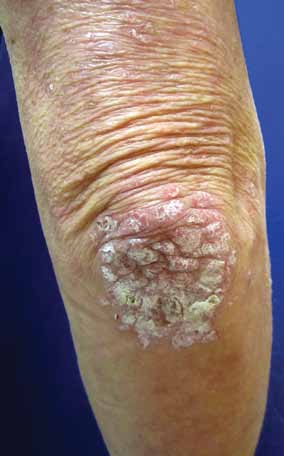 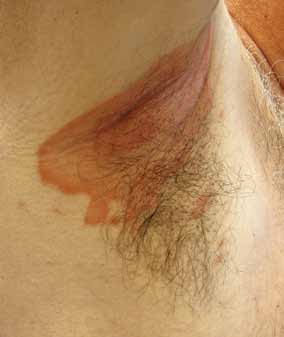 VILLASEÑOR-PARK AND COLLEAGUES
FIGURE 2. Patient with inverse psoriasis of
Photo courtesy of JosePh c. english iii, MD.
demarcated, scaly, pink-to-red plaques of vari- ous sizes with a relatively symmetric distribu- tion. Involvement of the extensor surfaces Psoriasis has
FIGURE 1. Well-demarcated erythematous,
scaly plaques characteristic of plaque pso- such as the elbows and knees and of the scalp, several clinical
riasis on the elbow.
trunk, and intergluteal cleft is common. variants,
Plaques can persist for several months to years, even in the same location, and only each with a
of the major histocompatibility complex, cyto- about 5% of patients report complete remis- distinct course
kines, receptors, and beta-defensins. sion for up to 5 years.
Of specific interest, polymorphisms in the and response
IL-12/IL-13 receptor, the p40 subunit of IL- to treatment
12 and IL-23, and the p19 subunit of IL-23 Involvement of the skin folds, including the strongly associate with psoriasis, supporting axillary, genital, perineal, intergluteal, and in- their critical role in the disease process and framammary regions with pink-to-red plaques providing targets for medical therapy.26 with minimal scale is the main clinical feature of inverse psoriasis (FIGURE 2). Absence of sat-
■ Psoriasis Has sEvEraL
ellite pustules clinically distinguishes it from Psoriasis has several clinical variants, each guttate psoriasis
with a distinct clinical course and response to Guttate psoriasis (named for its droplet- treatment.27 Moreover, many patients present shaped lesions) presents abruptly with 1-mm with more than one variant. to 10-mm pink papules with associated fine scale over the trunk and extremities (FIGURE 3).
This variant occurs in fewer than 2% of pa- Plaque psoriasis (FIGURE 1) accounts for more tients with psoriasis, who are usually younger
than 80% of cases. It is characterized by well- than 30 years. It is often preceded 2 to 3 weeks CLEVELAND CLINIC JOURNAL OF MEDICINE VOLUME 79 • NUMBER 6 JUNE 2012 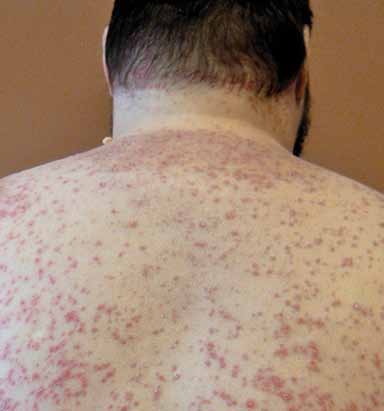 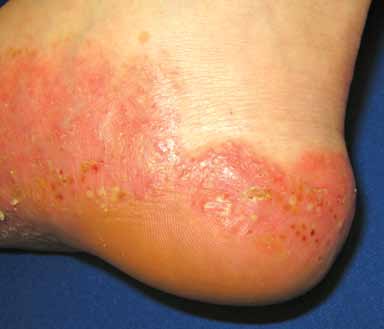 earlier by an upper respiratory tract infection with group A beta-hemolytic streptococci.
Approximately 1% to 2.25% of all patients with psoriasis develop this severe form, affect- ing more than 75% of the body surface area. It presents as generalized erythema, which is the most prominent feature, and it is often associ- ated with superficial desquamation, hair loss, nail dystrophy, and systemic symptoms such as fever, chills, malaise, or high-output cardiac failure. There may be a history of preceding characteristic psoriatic plaques, recent with- drawal of treatment (usually corticosteroids), phototoxicity, or infection. Conversely, approximately 25% of all pa- tients with erythroderma have underlying Pustular psoriasis (FIGURE 4) is uncommon. The
predominant lesions are large collections of neutrophils in the stratum corneum that clini- cally present as sterile pustules. The pustules FIGURE 3. Guttate psoriasis with characteristic erythema-
may be localized within or at the edge of exist- tous, scaly papules and small plaques on the back.
ing psoriatic plaques or may present as a gen- Photo courtesy of laura K. ferris, MD, PhD.
eralized eruption. There are several forms of pustular pso- riasis, including generalized pustular psoriasis, annular pustular psoriasis, impetigo herpeti- formis (pustular psoriasis of pregnancy), and palmoplantar pustulosis. However, there is some evidence to suggest that palmoplantar pustulosis may be distinct from psoriasis.29 Several triggers have been identified, in- cluding pregnancy, rapid tapering of medica- tions, hypocalcemia, infection, or topical ir- Generalized pustular psoriasis, annular pustular psoriasis, and impetigo herpetifor- mis often present in association with fever and other systemic symptoms and, if left un- treated, can result in life-threatening com- plications including bacterial superinfec- tion, sepsis, dehydration, and, in rare cases, acute respiratory distress secondary to aseptic FIGURE 4. Erythematous plaques studded with pustules
Placental insufficiency resulting in still- and red-brown macules on the acral surface of the foot in birth or neonatal death and other fetal abnor- malities can occur in severe pustular psoriasis Photo courtesy of JosePh c. english iii, MD.
416 CLEVELAND CLINIC JOURNAL OF MEDICINE VOLUME 79 • NUMBER 6 JUNE 2012 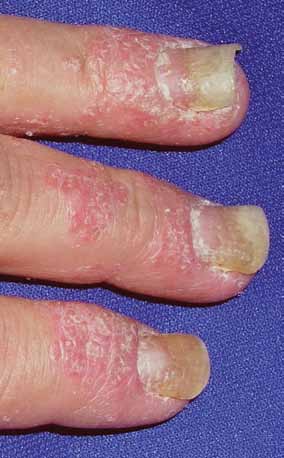 Anna was visiting a friend in another city when strange things began to happen. She saw things that looked real, but later didn't seem real at all. She was so troubled by what she described as not feeling like herself that she woke her friend; together, they called Anna's parents. "She started to cry," says Anna's dad. "She was talking about things, but we didn't know where they were coming from."