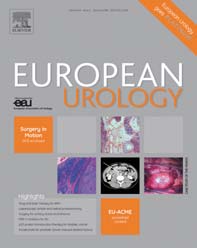 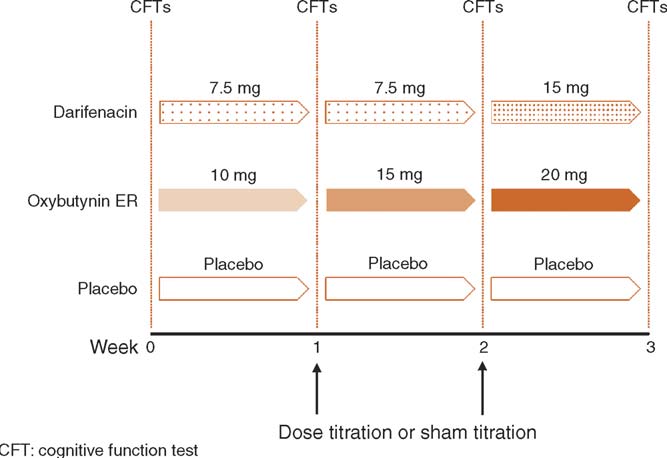 opioids, benzodiazepines or sedating antihistamines), or drugs that are substrates or inhibitors of cytochrome P450 Overactive bladder (OAB) is a widespread condition, (CYP) 2D6 or CYP 3A4. Subjects were excluded if they suffered the prevalence of which rises with increasing age from conditions for which anticholinergic use is contra- As bladder contractions are mediated primarily by indicated (e.g., uncontrolled narrow angle glaucoma, urinaryretention), if they suffered from dementia or scored 27 on the cholinergic activation of muscarinic M3 receptors Mini-Mental State Exam (MMSE) or if they displayed evidence antimuscarinics are used widely as first-line OAB of depression (score 9 on Geriatric Depression Scale).
treatments Some agents may, however, be Subjects entered a 2-week screening period, during which associated with safety concerns, including effects eligibility was assessed, and cognitive tests were administered on the central nervous system (CNS); (e.g., memory for familiarisation with procedures. Subjects were rando- impairment) . The potential for CNS safety issues mised (1:1:1 ratio) to receive once-daily (od) treatment with is of particular concern in older patients, who are oxybutynin ER, darifenacin or placebo (The 3-week more vulnerable because of age-related memory duration allowed titration of oxybutynin ER in accordance decline reduced brain muscarinic receptor with US prescribing information treatment for 1 week at density and comorbidities . Furthermore, each dose allowed steady-state cerebrospinal fluid concentra- clinical studies have demonstrated increased sensi- tions to be reached. Thus, the oxybutynin ER group received10 mg od in week 1, 15 mg od in week 2, and 20 mg od in week tivity of older subjects to antimuscarinics, including 3. The darifenacin group received 7.5 mg od in weeks 1 and 2 effects on memory . Consequently, selecting an (with a sham dose increase after 1 week), then 15 mg od during appropriate antimuscarinic for OAB requires balan- week 3 (in line with US prescribing information) . The third cing efficacy with possible effects on memory.
group received placebo throughout, with sham dose increases An important differentiator between antimuscari- after 1 and 2 weeks. Blinding was maintained by using the nics is activity at muscarinic receptor subtypes (M1– double-dummy technique. Dosing was supervised during M5). While oxybutynin binds preferentially to M3 and week 3 to ensure compliance.
M1 receptors, darifenacin demonstrates 9.3-fold Written informed consent was obtained, and the study was selectivity for M performed in accordance with good clinical practice guidelines 3 over M1 receptors in-vitro . This observation may be important for effects on memory, following ethical approval by a local review board according to as the muscarinic M the ethical principles laid down in the Declaration of Helsinki.
1 receptor plays a role in memory/ cognition . Indeed, it has been proposed that M3 Assessment of cognitive function may confer benefits selectively, as non-M3-receptor– mediated CNS side effects may be avoided (or Cognitive function was assessed through the Psychologix/ reduced) Supporting evidence includes two Cogscreen (Psychologix Inc, Fort Lauderdale, FL, USA; Cogsc- studies of healthy subjects (one in subjects 65 reen, LLC, Washington, DC, USA) battery of computerised years), in which darifenacin had no effect versus cognitive function tests (CFTs) performed during clinic visits at placebo on cognition . In contrast, a small-scale baseline and following each week (prior to dose or sham dose clinical study showed that oxybutynin was asso- increase) shows the tests that were employed ciated with cognitive dysfunction (which have been demonstrated to be reliable and valid in To our knowledge, there are no reports of a single- numerous studies) tasks performed in each test and controlled study investigating the effects of two the sequence in which the tests were performed.
separate antimuscarinics on memory. We report a comparison of the effects of darifenacin and extended-release (ER) oxybutynin on memory in older subjects.
Subjects and study design Healthy male and female subjects aged UNCORRECTED PROOF 60 years with English as a first language (n = 150) were entered into a multicentre, trolled, parallel-group, 3-week study. Subjects had to be able to follow instructions and complete the computerised cogni- tive tests with valid responses. Medications prohibited from 2 weeks prior to screening included drugs with anticholinergic properties, drugs with known effects on cognition (e.g., Fig. 1 – Study design. ER = extended release.

Table 1 – Battery of tests used to assess memory and cognitive function Immediate memory recall Name–Face Association Subjects are presented with a series of 14 people (displayed on a video monitor) who introduce themselves individually bycommon first names. Subjects are then asked to recall nameswhen the 14 people reappear in a different sequence. Two separatetests performed (first and second acquisition).
First–Last Name Association Subjects are presented with four pairs of first and last names.
Subjects are then asked to recall corresponding first namesas each last name is presented. Two separate testsperformed (first and second acquisition).
Facial Recognition Subjects are presented with a single facial photograph and are required to touch the face on the screen. In each of 24subsequent trials, subjects are required to identify a new faceadded to the set (8-second delay between each trial). Resultsare analysed as ‘correct before first miss' and ‘total correct'.
Delayed memory recall Name–Face Association 30 minutes after completion of the immediate recall Name–Face Association Test (as described above), subjects are re-presentedwith each face and asked for the corresponding name.
First–Last Name Association 30 minutes after completion of the immediate recall First–Last Name Association Test (as described above), subjects are askedto recall corresponding first names as each last name isre-presented.
Misplaced Objects Subjects are presented with a 12-room house on a monitor and asked to place 20 objects within the house using a touchscreen (no more than 2 objects per room).
After a 30-minute delay subjects are asked to recall objectplacement. Correct recall at first attempt is assessed.
Visual attention and memory Matching to Sample Subjects are presented with a checkerboard (4  4) made up of purple and yellow squares. The checkerboard disappears and is replacedby one identical and one similar board. Subjects are asked toidentify the identical board. Response speed, accuracy and efficiencyare measured.
Visual Sequence Comparison Subjects are presented with two random strings of numbers and letters (4–8 items) simultaneously (shown on left andright hand sides of a monitor) and are asked to identify whetherthey are the same or different. For each pair of strings, differencesof up to two items are allowed. Speed, accuracy and efficiency(the number of problems correctly completed per minute) are measured.
Psychomotor/reaction time and information processing Divided Attention Subjects watch a cursor (indicator) move vertically within a circle (Visual Monitoring Alone) divided into central, upper and lower sections. When the cursorcrosses into upper or lower sections, subjects are required topress a box marked ‘CENTRE' with a light pen. Indicator speedis measured as the median time the cursor spent outside thecentral section of the circle before the subject presses ‘CENTRE'.
Premature responses also are assessed.
Divided Attention In the second component of the Divided Attention Test, the (Visual Sequence Comparison and Visual Sequence Comparison task (as described above) is Visual Monitoring, Dual Condition) UNCORRECTED PROOF performed simultaneously with the Divided Attention IndicatorAlone Task (as described above). Response speed is measuredfor both tasks and accuracy and efficiency (number of itemscompleted) are measured for the Visual Sequence ComparisonTask in the Dual Condition (i.e., when performed with the DividedAttention Visual Monitoring Task). When the two tasks are presentedsimultaneously, the test assesses divided attention, working memory,and visual-motor and visual-perceptual speed. In addition,comparison of performance under single and dual task conditionsyields information regarding the subject's capacity for multitasking.
* Order in which tests were performed. 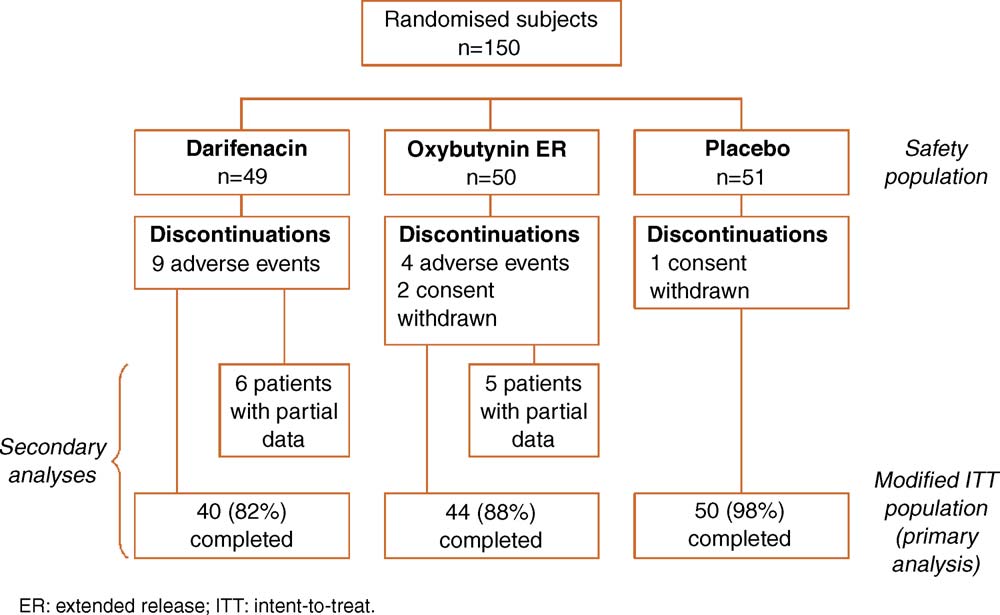 The primary end point was the effect of each antimus- oxybutynin ER having an effect size, versus placebo, approxi- carinic at week 3, versus placebo, on recent (delayed) memory mately one third of that seen with scopolamine in older as measured by accuracy on the delayed recall Name–Face patients Allowing for a dropout rate of 30%, we continued Association Test . This test measures an ability that enrollment until at least 150 subjects (50% female) were declines markedly with advancing age and has shown some recruited. Thus, a 1:1:1 randomisation schedule gave approxi- limited changes in response to drugs Name-recall is the mately 50 subjects per group. Analysis of the primary end most frequent memory complaint at all ages across multiple point was based on a modified intent-to-treat (ITT) population cultures This parameter is therefore relevant to the (subjects taking at least one dose of study medication with daily activities of older patients with OAB, making it complete baseline and week 3 scores for the primary end appropriate for analysis. The most important secondary end point). For secondary end points, the modified ITT population points were delayed recall on the First-Last Name Association comprised subjects with scores for at least one test at baseline Test and the Misplaced Objects Test both of which and any post-baseline time point. Scores for active treatments measure memory abilities relevant to daily life, and on which were compared with placebo using an analysis of covariance performance declines with advancing age. Also included as (ANCOVA) model with baseline score, age and gender as secondary measures were delayed recall scores at weeks 1 and covariates. This was a two-sided test at the 5% significance 2, and effects on immediate memory, visual attention, level. For exploratory purposes, comparisons between dar- information processing and psychomotor/reaction time.
ifenacin and oxybutynin ER were derived from an identical Subjective memory loss was assessed as a tertiary end ANCOVA model.
point, using a validated self-reporting instrument, the Memory Assessment Clinics Self Rating Scale (MAC-S) .
The MAC-S is a test in pencil/paper format, in which each subject is asked to rate their abilities on 10 specific memory tasks and two global items. Subjects were asked to rate how their memory had changed since the beginning of the study.
One hundred fifty subjects (darifenacin n = 49, oxy- Assessment of safety and tolerability butynin ER n = 50, placebo n = 51) were randomised and comprised the safety population. Of these, 134 Adverse events (AEs) (graded by severity and relationship to completed the study and formed the modified ITT study drug as assessed by investigators), including serious AEs population for the primary analysis ). Of the (SAEs), were documented. Results of laboratory tests and vital nine subjects who discontinued in the darifenacin signs were recorded.
group, six had partial data and were included in secondary analyses. There were six discontinuations Statistical analyses in the oxybutynin ER group, of which partial data A sample size of 35 subjects per group was considered available for five subjects were included in secondary sufficient to detect an effect size of 0.867 for active treatment analyses. One subject in the placebo group discon- versus placebo at week 3. This decision was based on tinued, for whom partial data were not available for UNCORRECTED PROOF Fig. 2 – Patient flow through the 3-week study.