Massive bioaccumulation and self&#x02010;assembly of phenazine compounds in live cells

Massive Bioaccumulation and Self-Assembly of Phenazine
Compounds in Live Cells

Janus Green B is another phenazine compound that undergoes determined that certain chemical modifi cations at the R-imino electrical potential dependent accumulation in mitochondria. [ 6 ] group promoted the self-assembly of phenazines, specifi cally However, neither of these compounds exhibits the massive in macrophages. The infl uence of these variations on bioaccu- intracellular bioaccumulation or intracellular self-assembly mulation and structure formation seemed highly idiosyncratic. properties that are characteristic of clofazimine. Furthermore, However, all compounds tended to preferentially accumulate because of differences in membrane partitioning, the transport in macrophages relative to epithelial cells, regardless of their mechanisms mediating the cellular uptake and intracellular chemical structure or physicochemical properties. distribution of clofazimine may be different from that of less lipophilic, more soluble phenazine derivatives. [ 8 ] Therefore, to explore whether other phenazine compounds could provide a 2. Results and Discussion
good a starting point for developing new kinds of self-assem-bling intracellular elements for drug delivery and bioimaging First, we synthesized a focused library of clofazimine deriva- applications, we decided to examine the impact of variations in tives ( Scheme 1 ), by replacing the chlorophenyl moieties of
lipophilicity and chemical structure on the intracellular uptake clofazimine with different aromatic substituents ( Figure 1 a and
and traffi cking of phenazine compounds. For this purpose, we Table S1 (Supporting Information), Compounds A–G). When synthesized a small, focused library of phenazine derivatives these compounds were incubated with cells, they exhibited of clofazimine, and assayed their bioaccumulation and self- similar or decreased intracellular staining relative to clofazi- assembly properties in RAW264.7 macrophages and Madin- mine, irrespective of their higher or lower lipophilicity relative Darby Canine Kidney (MDCK) epithelial cells. to clofazimine (Figure 1 a' and Table S2, Supporting Informa- Because phenazines are chromophores with a broad absorb- tion). Small changes in the chemical structure of clofazimine ance peak in the range of visible wavelengths, the interaction were associated with visibly different cellular staining pattern of the phenazine ring with monochromic, polarized light could in macrophages. In this fi rst series of phenazine compounds be useful to specifi cally probe the intracellular accumulation, (Compounds A–G), the chlorophenyl moiety of clofazimine distribution, and molecular organization of the phenazine was replaced with various other closely related substituents, yet compounds. Accordingly, a quantitative polarization micro- most of these substituents (Compounds A–F) led to decreased scope (LC-PolScope) [ 9 ] was adapted to assay the formation of cellular staining in relation to clofazimine. Only the replace- condensed, ordered molecular aggregates of the compounds in ment of chlorines with hydroxyls led to a staining pattern sim- live cells. With this instrument, we measured the manner in ilar to that of clofazimine (Compound G). which the intracellular inclusions differentially infl uenced the For comparison, we synthesized a second, focused series of transmittance of polarized light—an optical property known derivatives, in which the isopropyl group at the R-imino posi- as diattenuation anisotropy. [ 10 ] By relating the extent of bioac- tion of clofazimine was replaced with different achiral sub- cumulation to the measured optical properties of the intracel- stitutents (Figure 1 b and Table S3, Supporting Information, lular inclusions formed by different phenazine derivatives, we Compounds H–Q). Compared to clofazimine, replacing the Scheme 1. Synthesis of phenazine derivatives. Treatment of aniline derivatives 1 with 2-fl uoronitrobenzene 2 (using reagents: a) KF/K 2 CO 3 or
b) KOH/DMSO) gave the secondary amine derivatives 3 in 22–63% yield. Reduction of the nitro group was carried out using 10% Pd/C catalyst under
hydrogen atmosphere to yield the diamine 4 in 55–99% yield. Then the diamine 4 was oxidized in aqueous ferric chloride solution to give the cor-
responding phenazine salts 5 in 70–96% yield. The phenazine salts 5 on treatment with variety of primary amines gave the corresponding phenazine
derivatives 6 in 10–85% yield. These methods are elaborated in detail in the Supporting Information.
1500025 (2 of 11)
2015 The Authors. Published by WILEY-VCH Verlag GmbH & Co. KGaA, Weinheim Adv. Sci. 2015, 2, 1500025 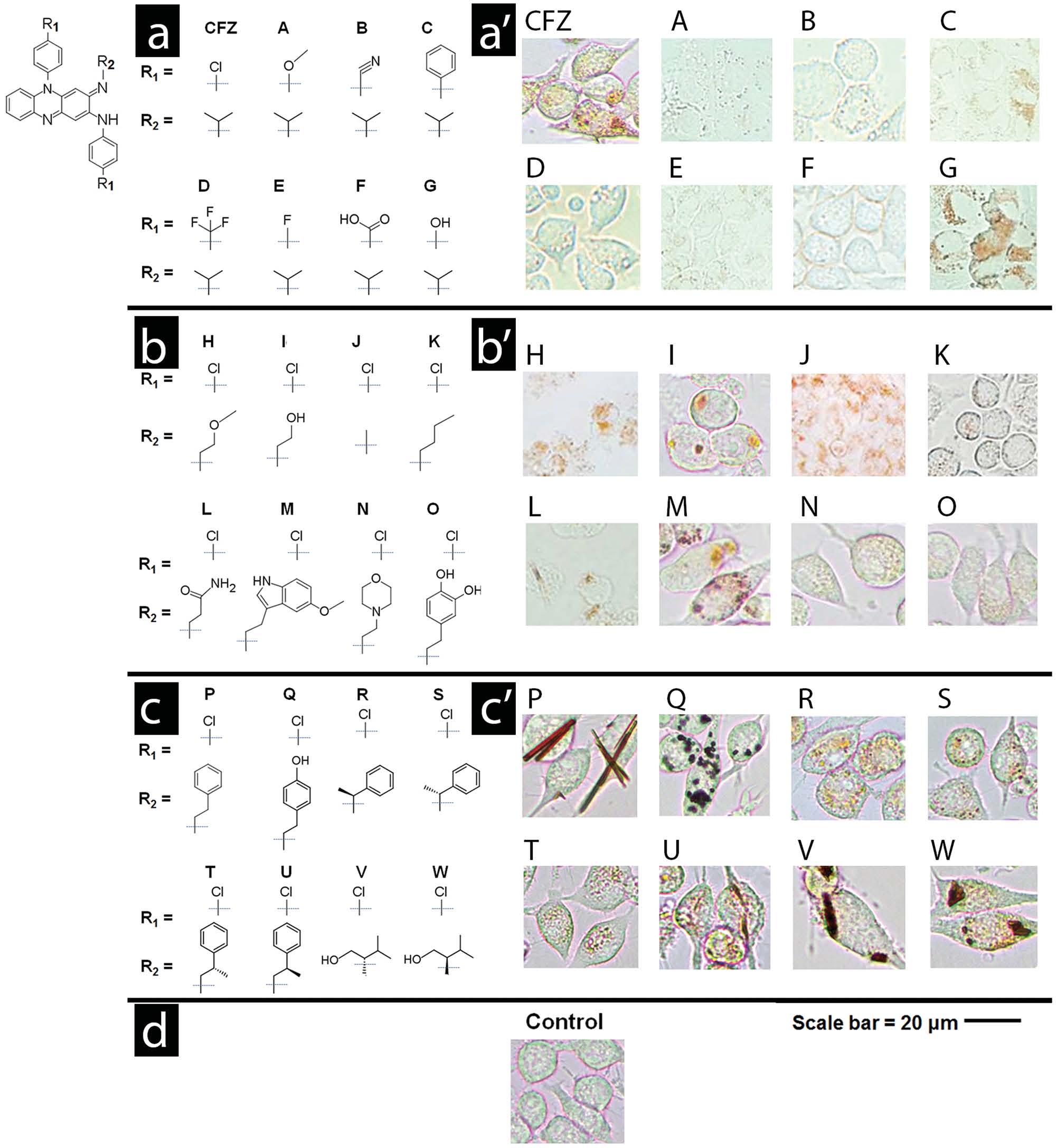 DRUGS IN U.S. RACING - 2010 THE FACTS With more rigorous standards than the Olympics, professional horse racing has the most aggressive drug testing program in professional sports, testing for more substances with greater sensitivity than anyone else. September 1, 2011 Copyright: 2011. Association of Racing Commissioners International.