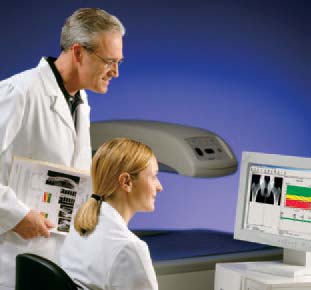 however also available from dietary sources, including meat, milk and eggs but most people get only small It is never too late to amounts of Vitamin D from their treat osteoporosis as diets. Supplements of Vitamin D sor Nick P are however readily available and even a small increase are relatively inexpensive. In many in bone strength can individuals these offer the easiest decrease significantly and most reliable means of ensuring adequate Vitamin D levels. For the likelihood of sociate PrAs people who do not get adequate sun fracturing a bone light exposure a supplement of at least 800IU (20 micrograms) per day include a group of drugs called º is recommended.
bisphosphonates. Most of these medications work by slowing the as even a small increase in bone rate at which bone is resorbed. The strength can decrease significantly bisphosphonates include ‘Fosamax', the likelihood of fracturing a bone. Weight bearing exercise helps ‘Actonel' and ‘Aclasta' and have Treatment includes a combination of: stimulate the bone cells to build been shown to decrease the risk bone. It also increases strength of fractures by approximately 50%. • calcium rich diet and improves coordination, which Some of the bisphosphonates may • adequate Vitamin D helps to prevent falls. A good form of be given at intervals of weekly or • weight bearing exercise, and weight bearing exercise is walking. monthly and one is available as a lifestyle changes to avoid heavy Before commencing any exercise once a year injection.
lifting and falls program, talk to your doctor.
There are a number of newer • Specific medications to improve It is also very important to medications which are also effective prevent falls from occurring. in the treatment of osteoporosis. Some medications which cause These include strontium ranelate drowsiness, poor balance, poor (Protos) and a group of medications A diet high in calcium is important eyesight, ill fitting footwear, loose related to oestrogens which includes for the body to maintain normal carpets and lack of care taken drugs such as raloxifene (Evista).
function of the major organs and when walking can all lead to falls. A to continue the rebuilding of bone person whose bone density is only which continues throughout life. slightly low but who falls frequently Osteoporosis is a common problem Dairy products are a good source of may be more likely to break a bone in our society and will affect 2 in calcium but other foods also contain than a person with osteoporosis who every 3 women who reach 60 and varying amounts. For those who are never falls. Balance and coordination one in every three men. The risk is unable to obtain sufficient calcium can be improved through exercise, even higher in those with coeliac from their diet, calcium tablets and studies have shown that Tai Chi disease who are also at risk of are available. Different amounts also helps significantly. Sensible developing osteoporotic fractures at of calcium are needed throughout shoes, improved vision with the an earlier age than in the general a person's life, depending on their correct glasses and the removal population. Early diagnosis by the sex, menopausal status, age, and in of any items from the home which use of bone density has proven to be women, whether they are pregnant can cause tripping will also help to an important intervention and can or breastfeeding. Your doctor will prevent falls.
significantly reduce the incidence of be able to tell you how much you osteoporosis and reduce the number require and whether calcium tablets of osteoporotic fractures in the are needed. Most adults require Specific medications are now approximately 1000mg calcium per available which have been shown to *Nick Pocock is Associate Professor in Nuclear be very effective for the treatment Medicine and Bone Densitometry at of osteoporosis and there are St. Vincent's Hospital, Sydney NSW. Kate many that are gluten free and Noakes is an RN and has been medically Vitamin D is essential for the normal diagnosed with coeliac disease.
therefore suitable to be taken by formation of bone and deficiency those with coeliac disease. These will result in increased bone resorption and osteoporosis. In any individual with malabsorption it is very important to ensure that the blood Vitamin D level is adequate. Gluten free hits prime time TV > > > A Vitamin D level below 50 nmol/L increases the risk of osteoporosis. Recently on a high profile quiz program there was a question Vitamin D is normally made by the every coeliac could answer – action of sunlight on skin. As we Which of the following grains is naturally gluten free: age however our skins become Wheat, Barley, Rye or Rice? less efficient at making Vitamin D Who wants to be a millionaire?? and many individuals do not obtain enough sun exposure. Vitamin D is