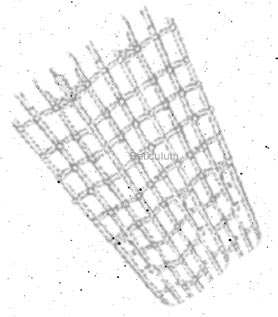 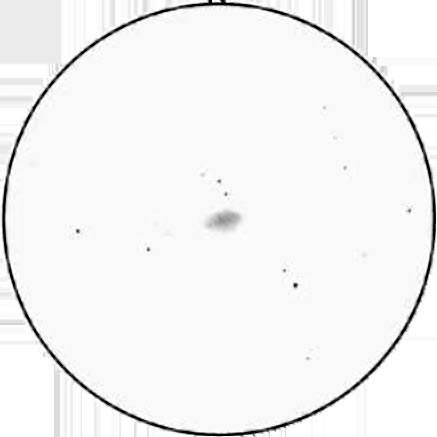 The Celestial
by Magda Streicher It is only appropriate to conclude the Image source: Starry Night Pro IYA2009 by considering one of the most vital parts of the telescope – the reticle – immortalised by the constel- lation Reticulum. Reticulum is Latin for ‘net'. One can imagine astronomers fishing out the discoveries from among rhomboidal crosshairs which he used to the southern stars. But the name trans- measure star positions while at the Cape lates more simply as an eyepiece reticle of Good Hope in 1752. The constal- instead of a fishing net.
lation's geometric shape had however already been noted and mapped as early This constellation was defined by the as 1621 in German records by Isaak French astronomer Nicolas-Louis de Habrecht as a constellation he called Lacaille (1713-62), who adopted Re- Rhombus. Reticulum is conveniently ticulum to honour the eyepiece with located in the north-west between the two Magellanic Clouds. It displays a somewhat crooked diamond shape, 7 degrees long and 2 degrees wide, and is ranked 82nd in size. The constellation houses a wealth of galaxies with few other deep sky objects.
The northern part of Reticulum is strewn with galaxies. The first one I've chosen is located 1.5 degrees north of magnitude 4.4 epsilon Reticuli. NGC 1543 is but a
small oval hazy glow in an east-west di- rection. It has a high surface brightness and very compact bright nucleus. Deep images show this galaxy possessing an Sketch of galaxy NGC 1543 with north to extended outer halo.
the top and east to the left.
mnassa vol 68 nos 11 & 12 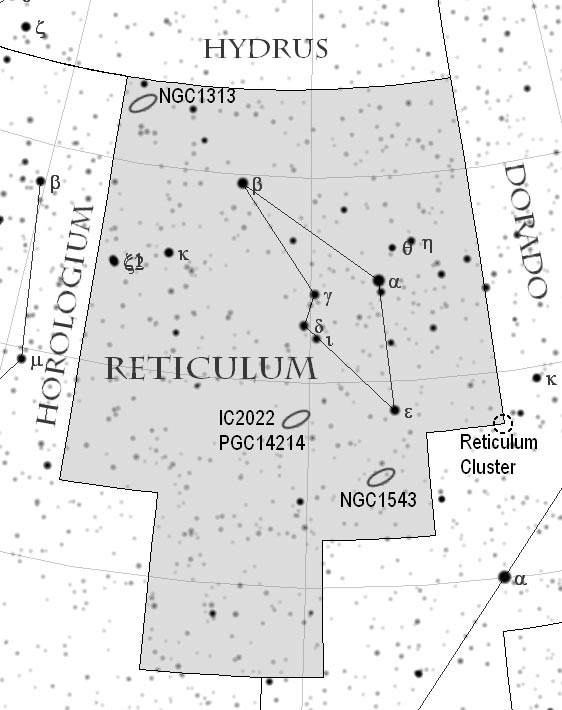 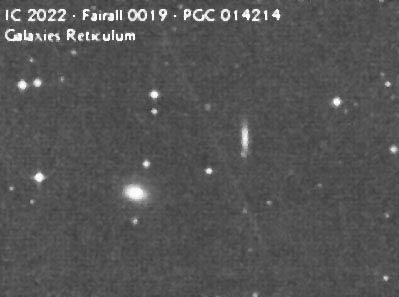 reticulum: the celestial crosshairs
The constellation boasts a remote globular cluster that was discovered in 1973 with the 24-inch Maksu- tov telescope at Chile's Cerro Calan Observatory. Known as the Reticulum
cluster, it is situated in the
far north-east, very close to the border with Dorado. Skymap produced using Cartes du Ciel The globular is located only about 10 degrees from the centre of the Large Magel- lanic Cloud and most prob- ably belongs to it. It has re- cently been studied with the 4-meter reflector at Cerro Tololo Inter-American Ob- servatory, and is estimated it to be 157 000 light years distant. The system also has a few pulsating variable stars with periods of less than one day. Traversing the starry skies about 4 degree (Sky and Telescope, April 1976).
eastwards, we arrive at a controversial galaxy known as IC 2022. Story has
it that during the years 1898 to 1901, Delisle Stewart, one of two astronomers sent by Harvard College Observatory to Arequipa, Peru to carry out a photograph- ic survey of the southern skies using the Bruce 24-inch refractor. On plate #4184 Stewart discovered a galaxy which was to become IC 2022. He describes the ob- ject as "exceedingly small, very extended at position angle 5 degrees". When ex- amining the field on the Deep Sky Servey, it showed two galaxies. The western, An image of IC 2022 taken during the
deep-sky survey. Credit: Webb DSO and fainter galaxy, matches Stewart's coordi-
Deep Sky Survey
nates and description. The other galaxy, mnassa vol 68 nos 11 & 12 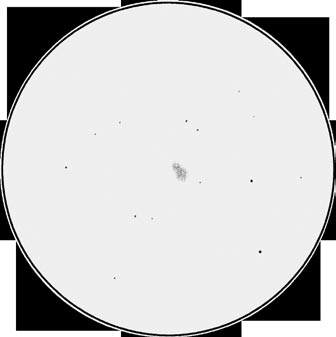 situated east, is much brighter, slightly primary displays a beautiful yellow oval and currently listed as Fairall #0019 colour in contrast to its fainter, slightly and PGC 14214 (DDS picture, Webb orange, companion.
Deep Sky Society issue 124). Tony Fair- all, who lectured at the newly formed De- Theta Reticulum – Magnitude 5.9 and
partment of Astronomy at UCT in 1970, 8.0, separation 4.1"
started a major photographic survey to In a low powered eyepiece, Theta find supernovae and compact galaxies in Reticuli is situated in the same field, just the southern hemisphere. Fairall died in 50 arc minutes south of the very yellow a diving accident at Hout Bay on 23 No- coloured magnitude 3 Alpha Reticuli.
vember 2008 (MNASSA 68, 3&4, April Alpha Reticuli is the brightest star in
the constellation of Reticulum and has a visual companion of apparent visual Lucas Ferreira, ASSA's double-star di- magnitude 12.0, located approximately rector, has agreed to contribute a note 48 arc seconds away from the primary.
on a few interesting double-stars located in this constellation. He describes them NGC 1559 is situated midway between
Alpha and Theta Reticuli, another gal- axy with a story. The Reverend Robert Zeta 1, 2 Reticulum - Magnitude 5.2 Evans from New South Wales visu-
and 5.5, separation 310"
ally discovered three supernovae in this The lovely outstanding yellow double galaxy. First was 1984j, followed by star Zeta 1 and 2 is situated in the far 1986L, with the latest 2005df, discov- western part of the constellation, only 25 arc minutes from the border with Horologium. Zeta Reticuli is a very nice wide binary. The system is located about 39 light years from Earth. The stars complete one revolution around each other in over a million years. If the skies are dark enough, to the naked eye, they appear as a close pair of separate stars – a very nice target in binoculars or low magnification telescopes too.
Kappa Reticulum – Magnitude 4.7
and 10.7, separation 54.1"
Just hop 1.3 degrees east of Zeta Reticuli NGC 1559 sketched with my 12-inch
where you will find kappa Reticuli. The working at 218 power.
mnassa vol 68 nos 11 & 12 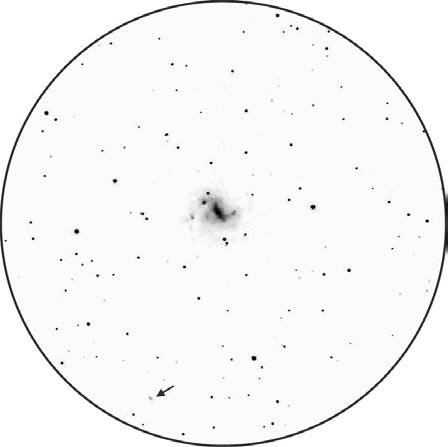 reticulum: the celestial crosshairs
ered shortly after midnight on 5 August a slender, curved and brighter tip. The 2005. With a magnitude of 12, super- galaxy has a high surface brightness, nova 2005df also turned out to be the brightening slightly towards the middle. brightest supernova discovered that year. High power, however, will reveal this Be sure to shift the glare of the bright Al- distorted barred galaxy to have an elon- pha Reticuli, located only 30 arcminutes gated nucleus. Australian amateur Jenni north of NGC 1559, out of the field of Kay noticed a thin, bright streak running view, when observing this galaxy. NGC from the western to the southern edge 1559 displays a smooth glow in a north- in this galaxy. She suspects there may east to south-west direction. The north- also be a dark lane in the north-eastern east tip is covered in a fast of haze, with region.
a slightly sharper edged south-east tip. A magnitude 11.8 star is situated just off The world's largest telescopes detects the galaxy's south-western tip. Higher luminous HII regions which outline the power reveals the galaxy slowly getting nuclear bar and two main arms. Isolated brighter to a pinpoint nucleus. With patches of star formation are found in careful observation and high power, I the south-western region and beyond could just made out surface texture with the rim of the northern arm. Lucas Fer- uneven parts. The galaxy is roughly 50 million light years distant.
The great Reticulum gal- axy, NGC 1313, is situated
exactly in the south-western corner of the constellation, only 3 degrees south-west of beta Reticuli and right in line with the imaginary crosshairs. At closer in- spection the galaxy it ap- pears bright, slightly hazy and irregular in a north- west to south-east direction. The flimsy north-western part is noticeably fainter than its south-eastern coun- Lucas Ferreira photographed NGC 1313. The colours
terpart. The south-eastern were inverted for clarity when printing. What is more, the
arm tapers down slightly, to galaxy NGC 1313A is just visible in this picture (arrowed).
mnassa vol 68 nos 11 & 12
reira kindly provided me with wonderful took place on 26 November 1962, reach- CCD pictures which show the galaxy's ing magnitude 11.7. The second was on flimsy arms extending more than double 31 July 1978, with a brightness of mag- its visual size in a haze. What is more, nitude 16. The recorded positions of the the galaxy NGC 1313A, is just visible supernovae on the surface of the galaxy as a very faint speck of light to the south- coincidentally differ very little.
east in his pictures.
You can make your own eyepiece reti- Two distinct supernova explosions have cles quite easily. Spider web silk or silk- been recorded in NGC 1313. The first worm thread both work very well. RA (J2000.0) Dec
5.2 - 5.5 Sep. 310˝ -62 56 4.7 - 10.3 -62 28 3.4 - 12.0 Sep. 48.5˝ 6.2 - 8.2 Sep. 4.1˝ mnassa vol 68 nos 11 & 12

Pain Management Tips and TricksPublished on ALN (http://www.alnmag.com) Pain Management Tips and Tricks Mary Ellen Goldberg BS, LVT, CVT, SRA, CCRA What is Pain?Pain has been called the "fourth vital sign" after body temperature, heart rate, andrespiratory rate, and its potential presence should be evaluated in patients just asother vital signs.1 Pain is an unpleasant sensory and emotional experienceassociated with actual or potential tissue damage, or described in terms of suchdamage.2 Pain motivates us to withdraw from potentially damaging situations,protect a damaged body part while it heals, and avoid those situations in thefuture.3 It is initiated by stimulation of nociceptors in the peripheral nervous system,or by damage to or malfunction of the peripheral or central nervous systems.4 Mostpain resolves promptly once the painful stimulus is removed and the body hashealed, but sometimes pain persists despite removal of the stimulus and apparenthealing of the body; and sometimes pain arises in the absence of any detectablestimulus, damage, or pathology.5 For the purpose of this session we will describepain as acute, chronic, or neuropathic (maladaptive).