H. Lelieveld, L. Keener / Trends in Food Science & Technology 18 (2007) S15eS19  Current position The process to identify relevant scientific organisations  Areas of expertise has been started. These organisations will be requested to  Years of experience in food science and technology inform their members about the GHI and to invite them to join GHI as scientific members. To avoid any financial  Statement on why interested in GHI and scientific hurdles, membership will be free, but to qualify, the follow- ing information must be provided:  Names and titles GHI is not after obtaining consensuses between scientific  Mail and email address organisations or any official bodies, but after consensuses be-  Nationality (to ascertain that we shall have members in tween individual scientists, regardless of their affiliations.
This leads us to one of the most important but at the same time perhaps most difficult tasks for the GHI group: how to  Membership(s) of scientific or professional organisations identify the real scientific experts and how to ensure that The goal of the initiative is to ensure the global availability of safe and wholesome foodproducts for all consumers. To achieve this, undue barriers to free trade that masquerade as food safety protectionsmust be vanquished. Such barriers include differences in regulations and legislation betweencountries globally. The international scientific community must, therefore, work towardsachieving global consensus on the science underpinning food regulations and legislation.
This will be achieved through attainment of the following objectives: 1. Identifying relevant scientific organizations 2. Inviting and encouraging the participation of these scientific societies in the global harmonization initiative and inviting their members to join in this activity in their field of expertise.
3. Identifying relevant non-scientific stakeholders4. Establishing effective communication between non-scientific and scientific organizations.
5. Inviting all stakeholders (organizations and individuals) to identify and submit key issues requiring attention.
6. Prioritizing key issues with the subsequent formation of working groups to draft white papers or consensus statements regarding the scientific validity of these issues.
7. Steering working groups to assess the best available evidence and discuss their findings with the scientific community, working towards building consensus. 8. Publishing results on a per issue basis in journals, magazines and newspapers9. Publishing collections of resulting consensus statements in book form 10. Presenting results and participating in appropriate conferences11. Making results available to all stakeholders, particularly those responsible for developing or amending regulations and legislation, global communicators, risk managers and assessors.
All of these will be done in an open, transparent manner, to avoid bias or the appearance ofbias, political or otherwise. 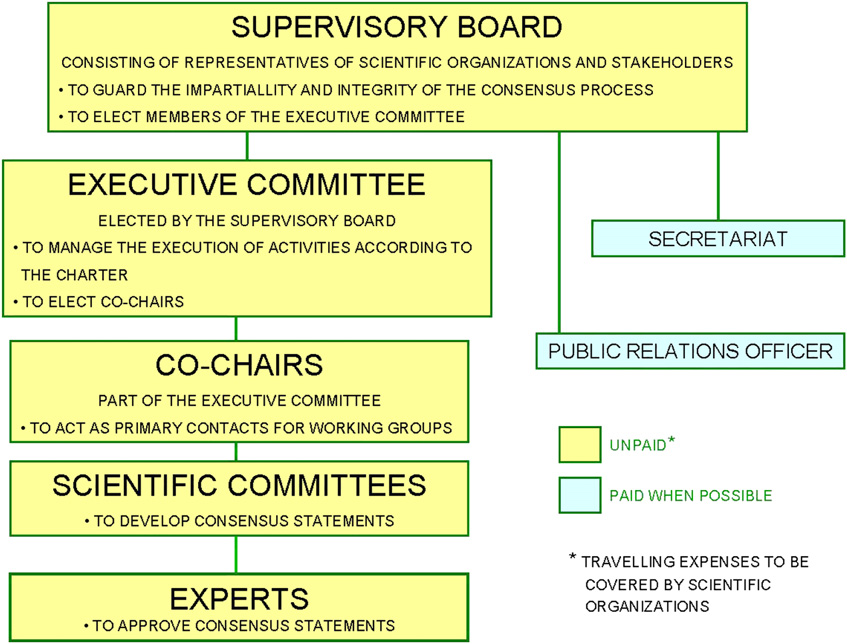 H. Lelieveld, L. Keener / Trends in Food Science & Technology 18 (2007) S15eS19 they will be able to participate in an independent way. Several for success, funds are required as staff will be needed to discussions took place on the identification of experts. The deal with the necessary correspondence and archiving.
initiative would fail if everybody could sign up as an expert Here, the GHI group faces a severe difficulty. Although on everything that he or she feels is something to be influ- stakeholders may play a role in providing issues and submit- enced. It is imperative that evidence of expertise is provided.
ting evidence, the GHI group needs to be independent of To qualify as an expert, therefore, candidates need to provide: stakeholders and therefore cannot and will not accept finan-cial support from either industry or governments. How then  Name þ contact details to solve this problem? After considerable debate, it has  Education details been decided that support from scientific organisations is es-  Scientific expertise sential and need not affect impartiality. Recognising that sci- entific organisations are unlikely to have the funds to finance  Supporting letters of at least two peers with no business the entire operation, these organisations may decide to attempt relation to the candidate to raise funds from, e.g. governments, industries, charities and  List of peer-reviewed publications individual members in any way, to secure resources required.
 Any other information considered to be relevant Provided, however, that the organisations will in no way pressthe GHI to focus on specific issues on the behalf of anypressure group. The GHI should be kept unaware of the Operation procedure stakeholders that provide financial support to the scientific Another activity that has been started is developing the organisations. The reason that stakeholders would support consensus ‘‘operation procedure''. The first step will have the initiative despite not being recognised as such should lay to be identification of issues and then prioritising them.
in the fact that they are stakeholders, i.e. they will eventually Proposed issues must be presented with justification and benefit from global harmonization of food regulations and any opinion of an issue must be accompanied by evidence.
legislation. In line with the GHI Charter, any funding In the follow-up of this process, we may depend on the avail- received by the GHI will be fully justified on the GHI web ability of experts as working parties need to be set up to eval- site and be open to inspection by participating scientific uate evidence provided. There will be a stage when a DRAFT consensus statement can be produced for circulation amongall other experts on the subject and for publication on the GHI web site. The next phase may be quite effort intensive To ensure that GHI will be able to operate professionally as replies need to be classified and evaluated and the process without losing impartiality, a GHI Foundation will be estab- may have to be repeated several times.
lished in Vienna, Austria, with the Charter as the core of theconstitution. Only employees will be paid. Of all others, only reasonable costs, such as for travelling, lodging and So far, all the GHI work is done by volunteers who believe teleconferencing will be funded. The structure of the orga- that the Initiative is worth the effort, but it is envisaged that nisations is presented below: