The smear layer in endodontics – a review D. R. Violich1 & N. P. Chandler21Private Endodontic Practice, Tauranga, New Zealand; and 2Sir John Walsh Research Institute, School of Dentistry, University ofOtago, Dunedin, New Zealand texts, whilst older books revealed historic informationand primary research not found electronically, such Violich DR, Chandler NP. The smear layer in endodontics – that this paper does not represent a ‘classical' review.
a review. International Endodontic Journal, 43, 2–15, 2010.
Data obtained suggests that smear layer removal Root canal instrumentation produces a layer of organic should enhance canal disinfection. Current methods and inorganic material called the smear layer that may of smear removal include chemical, ultrasonic and also contain bacteria and their by-products. It can laser techniques – none of which are totally effective prevent the penetration of intracanal medicaments into throughout the length of all canals or are universally dentinal tubules and influence the adaptation of filling accepted. If smear is to be removed, the method of materials to canal walls. This article provides an choice seems to be the alternate use of ethylenedi- overview of the smear layer, focusing on its relevance aminetetraacetic acid and sodium hypochlorite solu- to endodontics. The PubMed database was used tions. Conflict remains regarding the removal of the initially; the reference list for smear layer featured smear layer before filling root canals, with investiga- 1277 articles, and for both smear layer dentine and tions required to determine the role of the smear layer smear layer root canal revealed 1455 publications.
in the outcomes of root canal treatment.
Smear layer endodontics disclosed 408 papers. A Keywords: dentine, ethylenediaminetetraacetic acid, forward search was undertaken on selected articles endodontic treatment, smear layer.
and using some author names. Potentially relevantmaterial was also sought in contemporary endodontic Received 20 June 2007; accepted 21 July 2009 first reported by Eick et al. (1970). These workers showed that the smear layer was made of particles Whenever dentine is cut using hand or rotary ranging in size from less than 0.5–15 lm. Scanning instruments, the mineralized tissues are not shredded electron microscope studies of cavity preparations by or cleaved but shattered to produce considerable Bra¨nnstro¨m & Johnson (1974) demonstrated a thin quantities of debris. Much of this, made up of very layer of grinding debris. They estimated it to be small particles of mineralized collagen matrix, is 2–5 lm thick, extending a few micrometres into the spread over the surface to form what is called the dentinal tubules.
smear layer. Identification of the smear layer was The smear layer in a cavity and in the root canal made possible using the electron microprobe with may not be directly comparable. Not only are the tools scanning electron microscope (SEM) attachment, and for dentine preparation different in coronal cavities, butin the root canal the dentinal tubule numbers showgreater variation and there are likely to be more soft Correspondence: Nicholas Chandler, Associate Professor, tissue remnants present. The first researchers to School of Dentistry, University of Otago, P.O. Box 647, describe the smear layer on the surface of instrumented Dunedin 9054, New Zealand (Tel.: 0064 3 479 7124; fax:0064 3 479 5079; e-mail [email protected]).
root canals were McComb & Smith (1975). They International Endodontic Journal, 43, 2–15, 2010 ª 2010 International Endodontic Journal 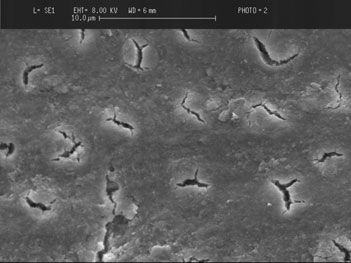 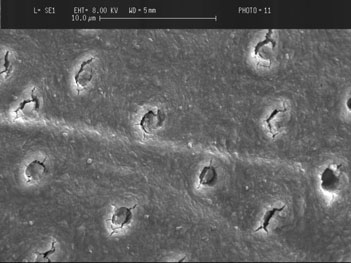 Violich & Chandler Smear layer in endodontics suggested that the smear layer consisted not only ofdentine as in the coronal smear layer, but also theremnants of odontoblastic processes, pulp tissue andbacteria. Lester & Boyde (1977) described the smearlayer as ‘organic matter trapped within translocatedinorganic dentine'. As it was not removed by sodiumhypochlorite irrigation, they concluded that it wasprimarily composed of inorganic dentine. Goldmanet al. (1981) estimated the smear thickness at 1 lmand agreed with previous investigators that it waslargely inorganic in composition. They noted its pres-ence along instrumented canal surfaces. Mader et al.
(1984) reported that the smear layer thickness wasgenerally 1–2 lm. Cameron (1983) and Mader et al.
(1984) discussed the smear material in two parts: first, Figure 2 Scanning electron micrograph of dentine surface superficial smear layer (Fig. 1) and second, the material showing smear plugs occluding tubules. The surface has been packed into the dentinal tubules. Packing of smear treated for 60 s with Tubulicid Blue Label (Dental Therapeu- debris was present in the tubules to a depth of 40 lm.
tics AB, Nacka, Sweden).
Bra¨nnstro¨m & Johnson (1974) and Mader et al. (1984)concluded that the tubular packing phenomenon wasdue to the action of burs and instruments. Components surface-active reagents in the canal during endodontic of the smear layer can be forced into the dentinal instrumentation. The thickness may also depend on the tubules to varying distances (Moodnik et al. 1976, type and sharpness of the cutting instruments and Bra¨nnstro¨m et al. 1980, Cengiz et al. 1990) to form whether the dentine is dry or wet when cut (Barnes smear plugs (Fig. 2). However, Cengiz et al. (1990) 1974, Gilboe et al. 1980, Cameron 1988). In the early proposed that the penetration of smear material into stages of instrumentation, the smear layer on the walls dentinal tubules could also be caused by capillary of canals can have a relatively high organic content action as a result of adhesive forces between the because of necrotic and/or viable pulp tissue in the root dentinal tubules and the material. This hypothesis of canal (Cameron 1988). Increased centrifugal forces capillary action may explain the packing phenomenon resulting from the movement and the proximity of the observed by Aktener et al. (1989), who showed that the instrument to the dentine wall formed a thicker layer penetration could increase up to 110 lm when using which was more resistant to removal with chelatingagents (Jodaikin & Austin 1981). The amount pro-duced during motorized preparation, as with Gates-Glidden or post drills, has been reported as greater involume than that produced by hand filing (Czonstkow-sky et al. 1990). However, McComb & Smith (1975)observed K-reamers, K-files and Giromatic reciprocating filescreated similar surfaces. Additional work has shownthat the smear layer contains organic and inorganicsubstances that include fragments of odontoblasticprocesses, microorganisms and necrotic materials(Pashley 1992). The generation of a smear layer isalmost inevitable during root canal instrumentation.
Whilst a noninstrumentation technique has beendescribed for canal preparation without smear forma-tion, efforts rather focus on methods for its removal, Figure 1 Scanning electron micrograph of smeared surface of such as chemical means and methods such as ultra- dentine. The crack shapes are processing artefacts overlying sound and hydrodynamic disinfection for its disruption.
dentinal tubules.
Root canal preparation without the creation of a smear ª 2010 International Endodontic Journal International Endodontic Journal, 43, 2–15, 2010 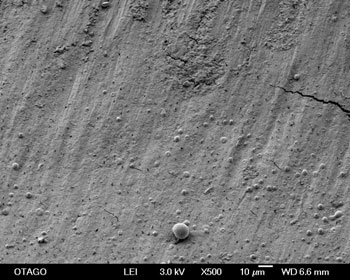 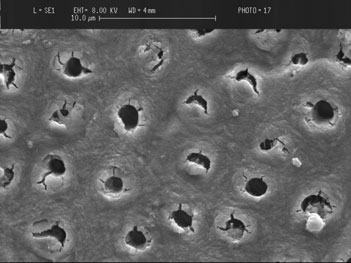 Be on the Giving End of Mercy New York Mission of Mercy is opportunity to make a difference and show you care. access to care is a big problem in the united and care to those in need. mid-level providers could states. many people go without needed dental care provide palliative care until the patient can secure for a variety of reasons. there are no dentists in