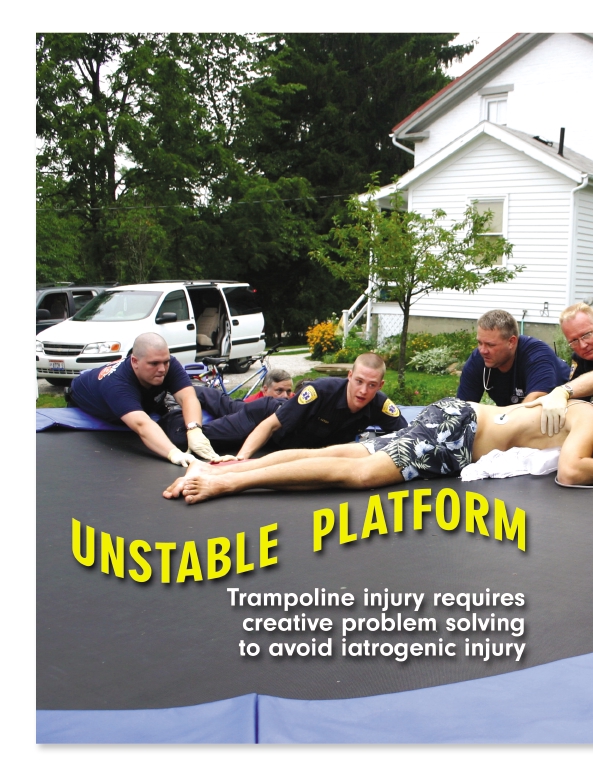 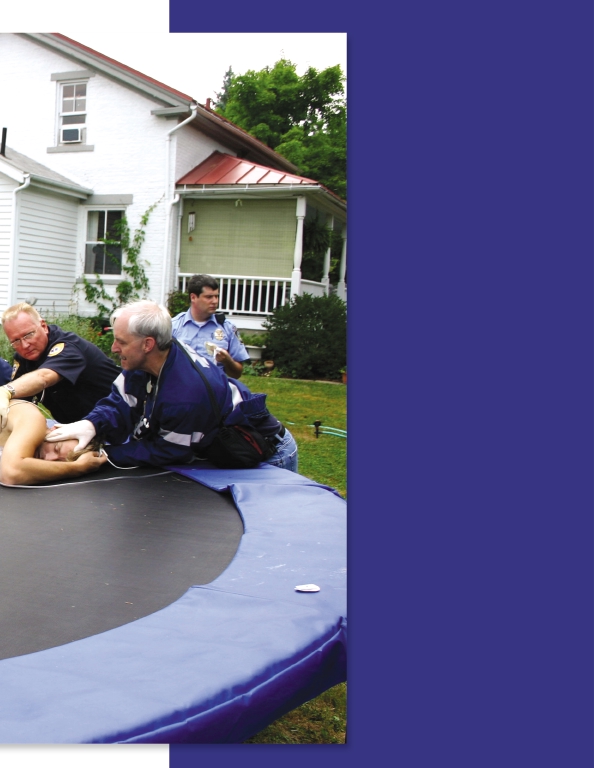 Story by Jay Carter, MSEE, MD, FACEP, & David Enzman, NREMT-P; Photos by Bruce Graham, NREMT-P, Hudson EMS Operations Manager Extrication of patients from motor vehicle accidents is usually well covered in EMTcourses, and EMS personnel gain ex- pertise in this component of rescue operations—many calls, many scenarios, much extricationexperience—early on in their careers. But a crewfrom Hudson (Ohio) EMS (HEMS), with acombined EMS experience totaling more than100 years, responded to a call that presented aunique situation. The call
The tones dropped for a man injured on a
trampoline and unable to move. The man's
wife had made the call to 9-1-1. The crew
suspected a cervical spine injury from the
start, and they anticipated putting the pa-
tient on a backboard and being off to the
hospital in short order. In their minds, extri-
cating and transferring a patient from a back-
yard trampoline would certainly be easier
than removing someone from an upstairs
bathroom, the bottom of the basement stairs
or a small, subcompact car. Surprisingly, this
was not the case.
On scene, Hudson EMS found a large, back- yard trampoline, elevated three feet off theground. The patient, an adult male, was lying onit, partially prone. His head was positioned nearthe edge of the canvas, and his feet were near the openhis eyes and respond appropriately to question-ing. He complained of some soreness in his neck.
He denied any headache, change in vision, chestpain, shortness of breath, or abdominal, back orextremity pain. He also denied any numbness ortingling in his extremities. He stated that he hadattempted to do a flip and had been unable tomove since landing. The physical exam revealed an awake patient who was oriented x 3. The patient had no obvi-ous head or facial trauma, but complained ofmild tenderness on palpation of the posterior Photo 1: Responding to a backyard trampoline injury, crews work togetheras a team and use innovative methodsto stabilize and prevent further injury tothe patient.
WWW.JEMS.COM MARCH 2006 JEMS 83 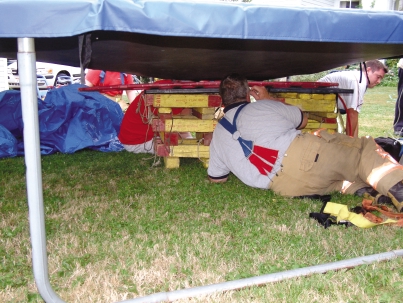 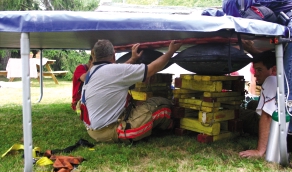 Photo 2: Two cribbing towers, air bags and a backboard are placed and the initial patient assessment completed, the crew's at- beneath the markedly sagging trampoline canvas to elevate tention turned to immobilization.
and stabilize the patient prior to further immobilization.
Without anyone on it, a trampoline canvas is normally taut and level. However, loaded with the weight of an adultmale, the canvas sagged significantly, almost 18 inches froma level plane. Additionally, although the trampoline surfacelooked firm, it wasn't; the canvas had significant spring to it.
Any additional pressure applied caused it to bounce up anddown, much like a water bed's surface. It was clear that the patient had a significant, unstable cer- vical spine injury. The providers were concerned that any fur-ther motion could result in respiratory failure or death. Initially, consistent with standard EMS practices, a back- board was placed on the trampoline, adjacent to the patientwith the goal being to immobilize him without inflicting anyfurther injury. The board was supported at each end, but thecanvas and the patient sagged well below the level of thebackboard. It looked like a bridge spanning a valley. The crew considered placing providers on the trampoline, Photo 3: Post air-bag inflation, the patient is elevated to a non-sagging, horizontal position with the canvas stabilized to minimize motion.
adjacent to the patient's shoulders, hips and legs, to both liftand logroll the patient onto the board—but quickly decided neck. His chest was non-tender and without any crepitus.
this was impractical. The amount of lifting, coupled with the He had adequate bilateral breath sounds and no obvious res- instability and bouncing it would have caused, would have piratory distress. His abdomen and back were non-tender.
made adequate cervical immobilization impossible. The extremities were also non-tender and without any obvi- The EMS incident commander requested the Hudson Fire Department for assistance with patient extrication.
The crew observed no voluntary motion of the patient's The EMS and fire incident commanders, brainstorming hands or feet. Sensation to light touch was intact on the and soliciting input from others on scene, evaluated sev- face, but absent from his chest, abdomen, back and ex- eral options and elected to construct an "elevator" (see tremities. The crew's clinical impression was of a cervical Photos 2 and 3, above) to level and stabilize the trampo- spine injury with resultant quadriplegia. With a safe scene line and patient. The amount of lifting necessary to bring 84 JEMS MARCH 2006 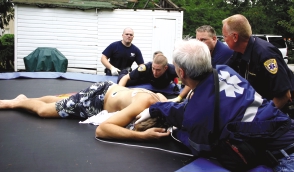 tient was then logrolled in a slow, controlled manner ontothe backboar The patient's head was initially found to be anteriorly positioned with lateral displacement and significant rota-tion. A single, smooth roll and positioning were desirableto regain neutral alignment and minimize the potential forinflicting further, iatrogenic injury. The patient's head wasmanaged by the HEMS medical director, who had re-sponded to the scene, and the patient's shoulders weremanaged by the EMS IC, who optimized the positioningof the patient's head, neck and shoulders. To avoid hesitation or pause while logrolling the patient, the medical director cautioned the crews in advance not tostop the logroll mid-procedure for any reason. Althoughthe patient did not experience any pain during the transfer, the patient to a level position is evident in the pre- and the providers noted bony crepitation while logrolling and Photo 4:Logrolling a positioning him. Two cribbing towers were placed beneath the patient.
After the patient was positioned on the board, a cervical traumatic cervical An inflatable air bag was placed on each tower, and a collar was carefully applied, followed by head blocks. The spine injury war- backboard was placed across the top of the air bags. With patient's neurologic status was assessed both pre- and post- one crew stabilizing the patient from above and another positioning. Fortunately, there was no deterioration in the crew stabilizing the elevator from below, the bags were patient's baseline condition, no sudden apnea and no sud- the infliction of slowly inflated. den death. Unfortunately, there was no readily apparent further injury or The backboard beneath the trampoline canvas rose gen- improvement in the patient's quadriplegia. (Photo 5 [p.
tly, lifting the patient's body up to a level, horizontal posi- 88] illustrates the patient post-immobilization and ready tion. It formed a rigid platform beneath the patient and helped stabilize the neighboring region of canvas. The pa- The patient was placed on high-flow oxygen by mask to 86 JEMS MARCH 2006 augment his respiratory status, and two large-bore IVs Fortunately, no intervention was required. The patient were started to permit fluid resuscitation should the patient remained conversant and had no respiratory distress manifest spinal shock with hypotension and bradycardia. A throughout the call. After hospital arrival, the patient did fingerstick glucose level and ECG were obtained to rule eventually tire and subsequently received a tracheotomy out hypoglycemia or arrhythmia as possible precipitating and ventilator support. Following a stormy course, which factors for the event.
included blood clots in his legs, pneumonia and cardiac The medical director instructed providers to administer arrest, he was ultimately weaned off the ventilator.
Phenergan, if needed, to treat nausea experienced by the pa- Although he remains quadriplegic, he is currently in a tient during transport. Narcotic analgesics were also consid- spinal cord rehabilitation unit in Cleveland.
ered, but proved unnecessary. Throughout the call, thepatient's pain was surprisingly minimal. The crew included several "old-timers" who normally To fully understand the significance of this case and the ex- enjoy the challenge of performing invasive procedures, in- trication and immobilization procedures used, it's impor- cluding intubation. But not during this call—not on this pa- tant to review spinal anatomy and discuss this patient's tient. Each of the seasoned providers later said they were specific injury. The spine can be viewed as a structural sup- thinking, "Please keep breathing," throughout the call. port for the body. It comprises 33 vertebra (seven cervical, Much like the prospect of field amputations, intubation 12 thoracic, five lumbar, five sacrum and four coccyx). The of a patient with cervical trauma is a bridge that the in- vertebral bodies are strong, cylindrical bony structures that sightful practitioner would prefer never to cross; the risk of support an individual's weight. inducing further injury or death is just too high.
Posterior to the vertebral bodies is a bony ring that pro- Treatment options were mulled over before any ac- tects the spinal cord it encompasses. The bodies are sepa- tion was taken so that if an intervention became neces- rated by disks that serve as shock absorbers for the spine sary, the plan of action would already be in place and and increase mobility. The ring has bony prominences that indecision would not delay treatment. Oral intubation, extend posteriorly and bilaterally. The posterior promi- surgical cricothyrotomy and bag-valve-mask ventilation nences can be felt as bumps down the center of your back.
were all discussed. Paralytics and LMAs were not avail- They serve as attachment points for muscles. able for consideration. A multitude of possible spinal fractures exist, a review of WWW.JEMS.COM MARCH 2006 JEMS 87 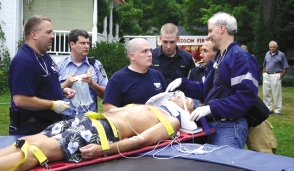 pain and temperature. The goal of prehospital cervical spine immobilization is to maintain the head and neck in a neutral position andprevent any motion from inducing or worsening nerveinjury. C-spine protocols are designed to protect the pa-tient with a known or potential neck injury, recognizingthat once injury occurs, it's frequently irreversible andoften devastating. This patient sustained quadriplegia, which was evident during the crew's initial assessment. The concern for hisbreathing was due to the fact that the level at which the spinewas injured determines the ability of the patient to breathe.
Breathing encompasses ventilation (i.e., moving air in and out of the lungs) and respiration (i.e., the exchange of gasesbetween the alveoli and the blood). Ventilation is controlled which is beyond the scope of this article. Of concern to subconsciously, with conscious override. You breathe with- EMS is the fact that some fractures may impinge on the out thinking about it but you can also take a deep breath or integrity is ascer- spinal canal and the spinal cord within. Fractures may be hold your breath, if you so desire. tained both prior unstable, permitting the bones to shift and to compress or Ventilation is so crucial to life that nature has built in re- sever the spinal cord.
dundancy, providing two separate neuromuscular mecha- Severed nerve fibers result in permanent loss of func- nisms to make sure it happens. Nerve roots branch off the tion. Compressed nerves may recover but, unfortunately, spinal cord at cervical levels C3, C4 and C5, forming the are prone to permanent injury. Damage to a motor nerve phrenic nerves. The right and left phrenic nerves travel down will result in paralysis of the muscle innervated by that to innervate the diaphragm. The muscular diaphragm con- nerve. In addition to para- or quadriplegia, motor nerve tracts, pulls downward and draws air into the lungs. injury can result in respiratory insufficiency, or apnea.
Additionally, the thoracic nerves, which branch off the Damage to sensory nerves results in the loss of sensation, spinal cord at thoracic levels T1 through T11, innervate the 88 JEMS MARCH 2006 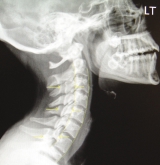