Abstract
Supervisory Committee
Dr. Mitchell Lewis Hammond, (Department of History)
Supervisor
Dr. John Lutz, (Department of History)
Departmental Member
Dr. Eike-Henner Kluge, (Department of Philosophy)
Outside Member
Despite extensive research on the history of medicine, little has been written on the role played by pharmacists. The diminished demand for compounding services that accompanied the explosion of manufactured pharmaceuticals after World War II left pharmacists over educated and underutilized. This study demonstrates how British Columbia pharmacists reconstructed their professional authority in the 1960s through the formation of a Pharmacy Planning Commission, a process that pre-dated and influenced other jurisdictions. Examination of the archives of the College of Pharmacists of British Columbia reveals that pharmacists overcame ethical restrictions, adopted clinically focussed education and increased accessibility to facilitate a role as consultant to the public on non-prescription medications. The addition of prescription drug counselling and an increased role as drug consultants to physicians allowed British Columbia pharmacists the authority to claim a core competency as drug information experts. Table of Contents
Introduction . 1 Chapter 1 . 16 Chapter 2 . 37 Chapter 3 . 48 Chapter 4 . 72 Conclusion . 83 I would like to acknowledge the help and guidance provided by my supervisor, Dr. Mitchell Lewis Hammond. Additionally, I am grateful to both additional members of my committee, Dr. Eike-Henner Kluge and Dr. John Lutz. Your help was greatly appreciated. I would also like to acknowledge all of the History Department instructors who have helped guide a student with a background in science and business into the world of humanities. My wife, Frances Dove, deserves all the credit in the world for reading my work over the past four years and enhancing the clarity of my writing. She has learned more about pharmacy history than she ever expected, or desired. 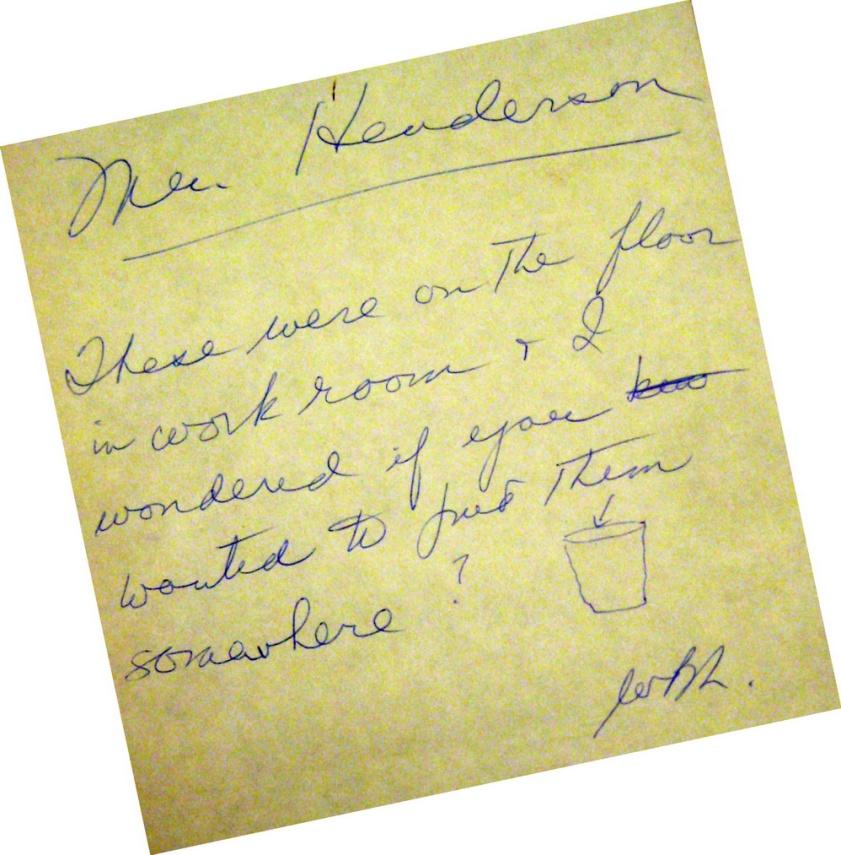 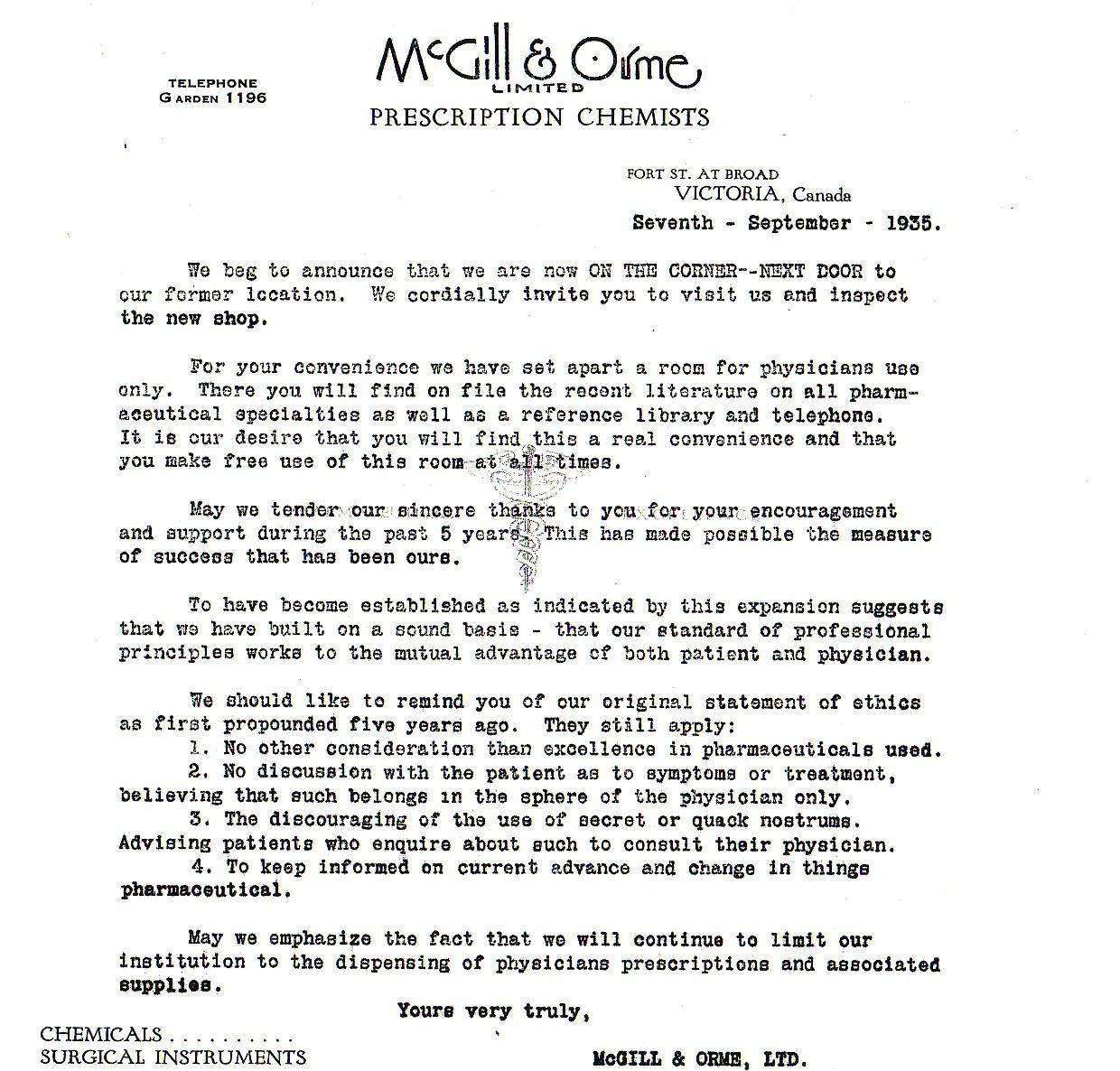 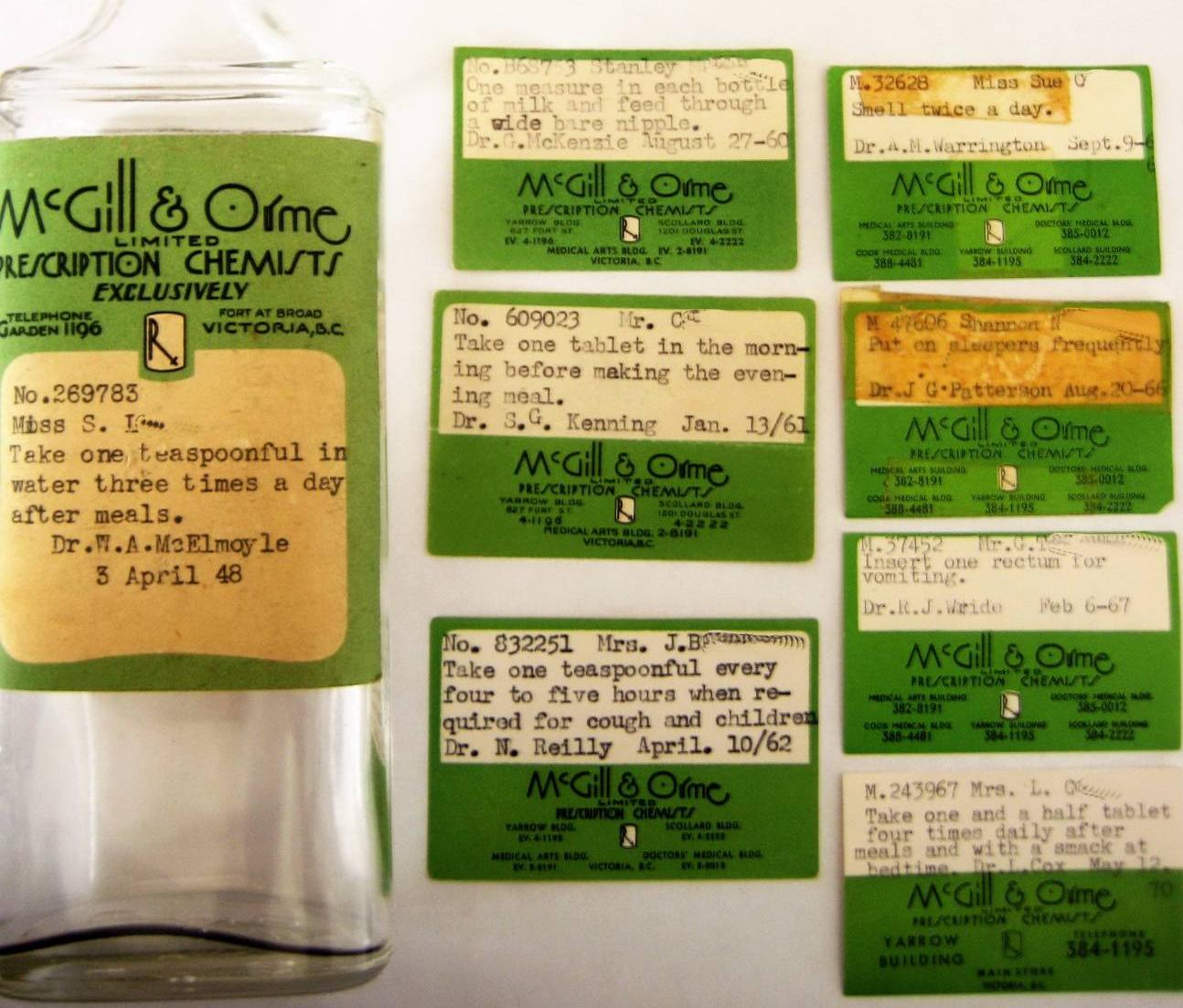 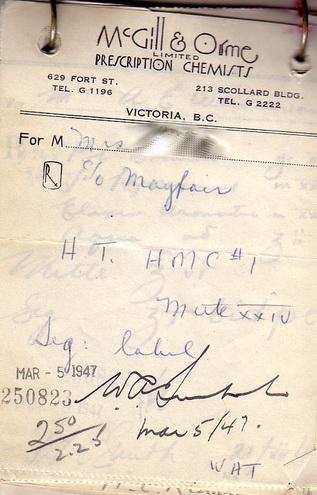 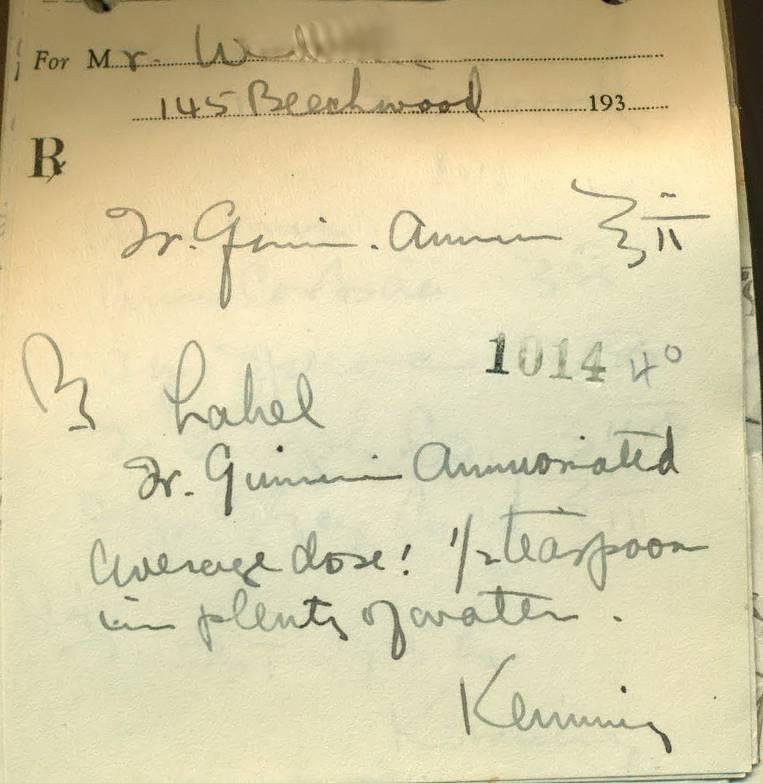 desoxyephedrine, methedrine, ortho-dinitrophenol, penicillin, pervertin, phenytoin,
streptomycin, sulphonamides, tetraethylthiuram, thiouracil, thyroid, thyroxin and
urethane.
Miscellaneous Information
1. The physician instruction "label" was found on only one prescription in 1931 (Rx1014) and one prescription in 1947 (250823). This notation instructed the pharmacist to include the composition of the physician's order on the patient's prescription label. 2. In 1931, physicians sometimes included designations in the directions that would identify the prescription without listed the ingredients. Examples include: Rx 1377 – THE TABS One tablet three times daily before meals Rx 1126 – THE DROPS As directed 3. Physicians would occasionally add "clinical therms" to the prescription such as Rx1843 - "Keep in mouth for full two minutes." These instruct the pharmacists to pass this information on to patients. Unless requested, pharmacists were not supposed to give any additional instructions to the patient. 4. The following drugs in the 1931 prescription file would not be prescribed in 2010. Calomel (Mercurous Chloride), Strychnine, Arsenic and Cannabis. Synthetic cannabis (nabilone) is used in 2010 to treat nausea resulting from cancer chemotherapy. 5. Four homeopathy prescriptions were filled in 1947. 6. Antibiotic prescriptions accounted for 130 out of 975 prescriptions in 1947. 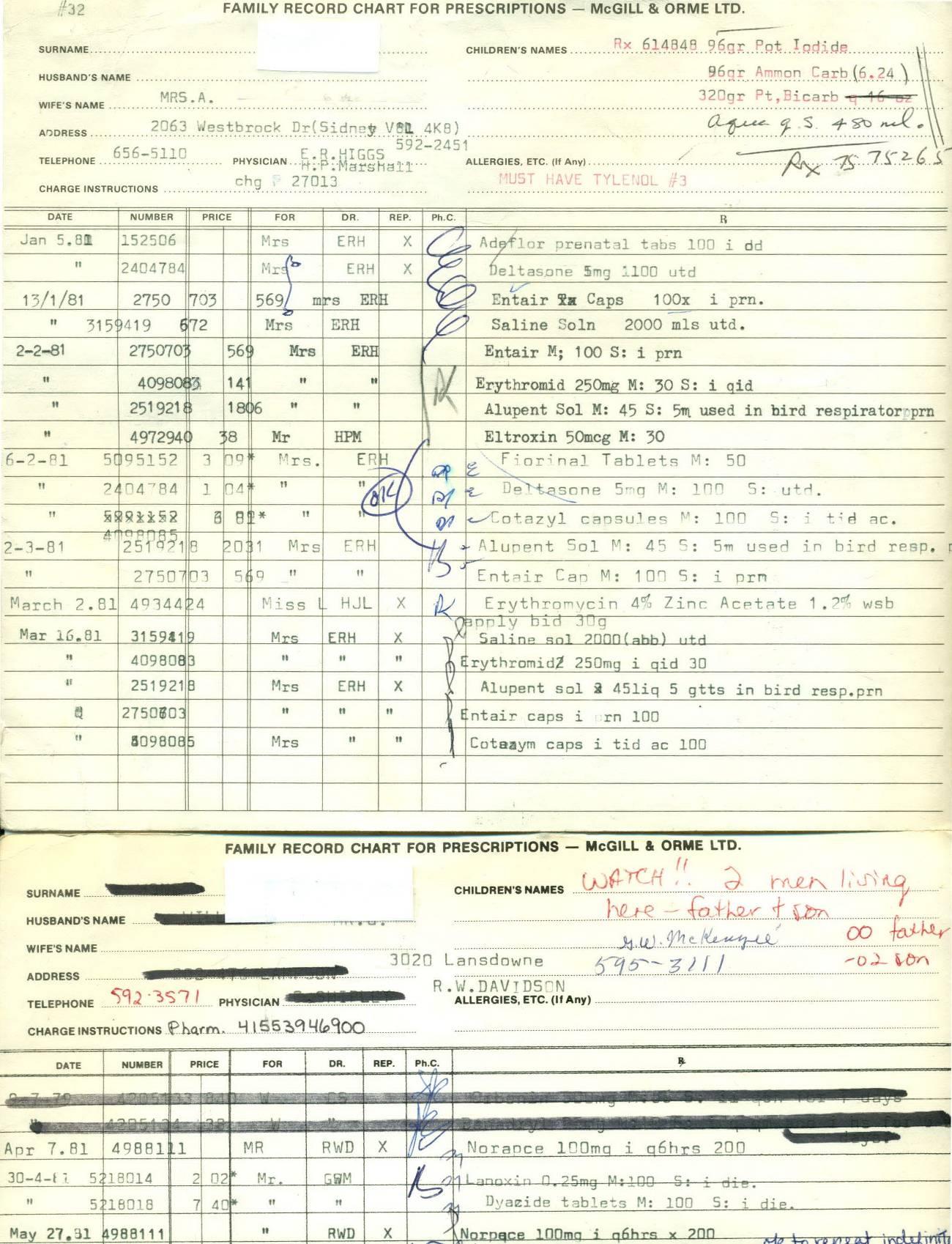 Pharmacy Planning Commission – Resolution of the 1966 BCPhA Annual Meeting
That: the 1966 Annual Meeting of the Pharmaceutical Association of the Province of
British Columbia recommends to council that immediate steps be taken to appoint a Planning Commission by the time of the October 1966 council Meeting. This Commission is to receive briefs from interested individual pharmacists, groups of pharmacists, associations, etc. Such Commission is to consist of all facets of our professin with consultants and advisors. The chairman to be appointed at the discretion of council. Also, that this Planning Commission and the terms of reference be accetable to all practicing pharmacists through district meetings. Further, that this Commission be instructed to report their findings to a meeting of the council and all interested pharmacists at the tme of the March 1967 meeting of council and, further, to include in its deliberations the Report of the Study Group on Pharmacy in British Columbia under the auspices of the South Vancouver Island Pharmacists' Association and the Lower Mainland Pharmacists' Association as submitted to council on Sunday, June 19th, Pharmacy Planning Commission – Terms of Reference
General The Commission shall inquire into and report upon all aspects of the practice of pharmacy, the provision of pharmaceutical services to the public and the organizational structure of the profession within the province of British Columbia, making such recommendations as it sees fit respecting the service provided to the public, the status of the pharmacist and the profession's organizational structure. Specific Without limiting the generality of the foregoing, the Commission shall inquire into and report upon: 230 UBC-SM-CPBC, Box 12A-10, PPC Report, i. a) The organizational structure of the Association and its functions, both statutory and representative, including a consideration of the need and/or advisability of extending them or establishing other organizations to separate the functions. b) The relationship between the "profession" of pharmacy and the "business" of pharmacy (i.e., the professional-commercial balance), including an assessment of the utilization of the pharmacist's professional services and education. c) The economics of providing professional pharmacy services (without reference to the cost of the drug itself). d) The relationships between employer and employee pharmacists, including a consideration of remuneration to, and other conditions of employment of, employed pharmacists and registered students. e) Manpower sources and requirements, including the recruitment, enrollment and training of pharmacy students and the registration of pharmacists from outside the f) Communications and relationships between the Council of the Association and pharmacists and pharmacy students. g) Communications and relationships between pharmacists and themselves. h) The relationships between pharmacists and physicians and other health professionals at the practising, organizational and educational levels. i) The relationships between pharmacists, as represented by the Association, and departments of government. j) The relationships, current and potential, between pharmacists, as represented by the Association, and insuring agencies providing drugs and pharmaceutical services as benefits in health care plans. k) The relationships between pharmacists individually and collectively (the Association) and the pharmaceutical manufacturing and wholesaling industries.231 231 UBC-SM-CPBC, Box 12A-10, PPC Report, ii. Appendix F

The Code of Ethics of Pharmacists in British Columbia
(drafted by Joint Association-Society Code of Ethics Committee: adopted March 1969) I, Pharmacist Name Do hereby promise to accept those responsibilities vested in me as a Pharmacist in the pursuit of fulfillment of the health needs of my community. That I will place above all other considerations, my regard and concern to provide the highest level of patient care possible by the use of my skill, and judgment and by co- operation with other members of the health sciences. That I will strive to attain the highest degree of personal quality, attitude and objectivity, all of which will result from constant vigilance in practicing my profession That I will participate in programs of continued study throughout my professional life, in order to keep abreast of new advances in pharmaceutical practice and technique and in order to maintain a high level of competence in working with other health practitioners. 233 "Principles of Pharmaceutical Ethics," Canadian Pharmaceutical Journal, Vol LVII No. 2 (Sep 1923): 18 & 24. That I will seek to be regarded by the public, my colleagues, members of the other health professions and my business associates as a law-abiding citizen, evidenced by compliance and performance. That I will actively support to the best of my ability, organizations engaged in the provision of high standards of pharmaceutical service and professional behaviour, thereby contributing to the advance of the public health. Signed by Pharmacist234
Schedule A – Code of Ethics Adopted 2009