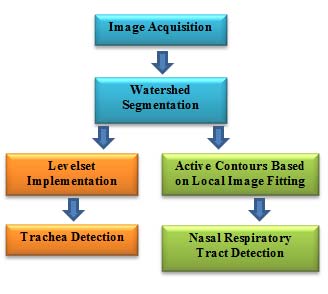 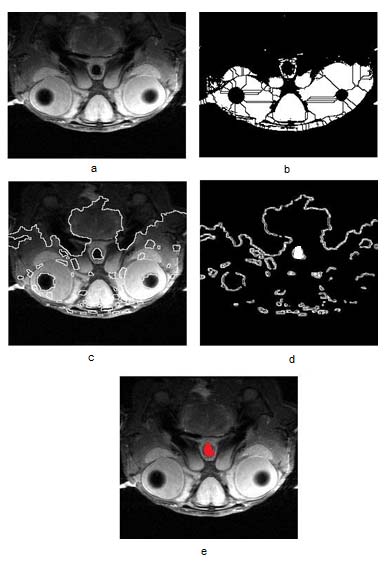 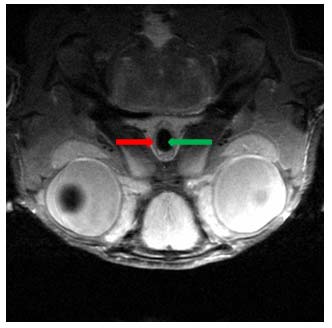 Fig. 1.Nasopharyngeal airway (green arrow) and trachea mucosa (red arrow) of guinea pig. The subject in these data are guinea pigs which are sensitized by aerosol inhalation of antigen and this antigen challenge into Fig. 2. Block diagram of our proposed method for drug evaluation in trachea the nasal cavity increased both nasal vascular permeability and and nasal respiratory tract. intranasal pressure. Another effect of antigen challenge into nasal cavity which may cause nasal blockage is swelling of sequences of the images. Second, the total effect of Azelastine nasal mucosa and a decrease in nasopharyngeal airway [22]. should be evaluated and compared against previous works Here, we study the effect of Azelastine drug, an antihistamine on swelling of mucosa. A slice of guinea pig's nasopharyngeal and it's mucosa is shown in Figure 1. Antigen would swell the mucosa (red arrow) and antihistamine would inhibit that (green arrow). B. Method Execution In order to implement our method, we should follow the block diagram in Figure 2. In this block diagram, first we must insert our data for a preprocessing step which is a watershed method implementation. In the next step, level set algorithm is applied to these data and results of trachea area segmentation is extracted. With these results of segmentation, we can calculate the trachea area for 20, 30, 40, 50 and 60 minutes after Azelastine injection. This process will continue for every slice of a MR image. For example, if a data set has 6 sets of 10 slices of MR images, we should implement our method on every set (which is related to a specific time after injection of Azelastine) and also on every slices of the desired set. After using our method, and finding nasopharyngeal airway area of each slice of an image, we will build a 3D model of nasopharyngeal airway area and its total volume will be extracted. After injection of Azelastine, 5 sets of images were taken. The first set had been taken after 20 minutes of injection, while the second set after 30 minutes, the third set after 40 minutes, the fourth set after 50 minutes, and the last set after an hour of injection were taken. Therefore, in order to evaluate Fig. 3.The Enhanced Level set method for finding nasopharyngeal of guinea pig. (a) Original image. (b) Watershed regional segmentation. (c) Watershed the effect of Azelastine, we should consider two points. First, region and boundary finding. (d) Level set after70 iterations. (e) Final image the trachea variations should be calculated through time with specified trachea area. 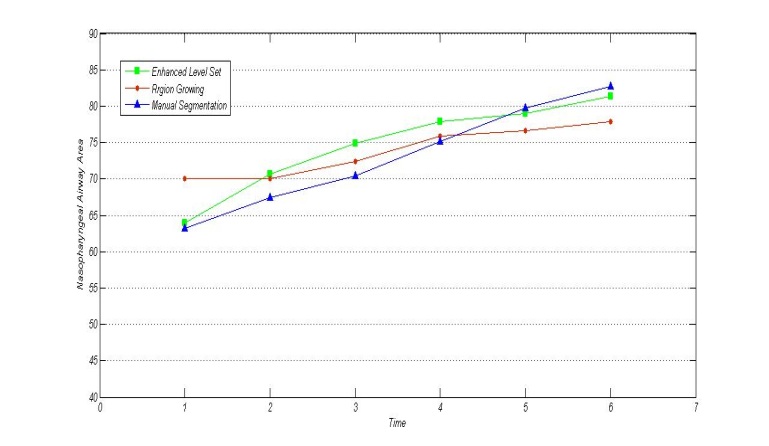 TABLE I AZELASTINE EFFECT IN NASOPHARYNGEAAL AIRWAY AREA AND VOLUME: A COMPARISON OF OUR PROPOSED METHOD WITH PREVIOUS STUDIES.
Trachea after antigen inhalation Azelastine effect in Trachea area ( 70.62 74.87 77.9 79.05 81.4 9.95 70.2 72.35 75.9 76.6 77.82 13.9 67.43 70.4 75.09 79.74 82.69 Fig. 4. Trachea area ( ) before and after 20, 30, 40, 50 and 60 minutes of injection of Azelastine.
As mentioned in the previous section, we would implement trachea area from a slice of a MR image. These methods are our Enhanced level Set method on our MRI data to segment and find out it's efficiency for finding nasopharyngeal airway enhanced level set, region growing and manual segmentation. of guinea pig. Figure 3 shows the steps of our method as discussed in the proposed method section. At first, the The exact area of trachea is shown in Table I with watershed algorithm is applied on our image shown and the comparison to manual detection of trachea area and the simple result of local segmentation can be seen in Figure3.b. After Region Growing method. Table I shows that our method this step, the boundaries are highlighted and the new image is produces similar results to manual detection of airway areas ready for the level set method (Figure 3.c). At the beginning of while Region Growing method has sporadic results for the last evolving, the level set function, images. In addition, in this table, the total effect of Azelastine according to Equations 4 and 5. Then, by using Equation 6, after 60 minutes is compared to previous works [22]. Note that the level set function is calculated (Figure3.d), and finally by the actual area of trachea before any inhalation is 90. 4 setting the positive level set to 1 and otherwise to -1, the local segmentation of nasopharyngeal will be achieved as can be seen in Figure 3.e. In this task, the contours are stopped after According to Table I and Figure 4, we can say that our 70 iterations as can be observed in Figure 3.d. This is while method has results with most similarity to Yamasaki work more iterations would be time consuming, and less iterations [22]. It is also notable that the Enhanced Level Set method has would lead to global segmentation. faster results than manual segmentation results, especially By finding the trachea area now, we can estimate the when we face large amount of data for processing. An variation through time, total variation and total volume change important point from these results is that various methods had which is discussed above. proven that after some time has passed, the Azelastine will First, we study the effect of Azelastine after injection as reduce and quell the swelling effect of antigen. In Table, I the time goes on. The area of trachea after injecting antihistamine trachea area is increasing for consecutive images through time will vary and these changes can be seen in Figure 4. In this and this increase is proven with different methods. Moreover, figure, the trachea area size after 20 minutes of Azelastine we can realize that this increase is a demonstration for injection until 60 minutes after injection is depicted. As can be decrease in swelling of nasal mucosa which is a result of seen in Figure 4, three different methods are used to find antihistamine administration. 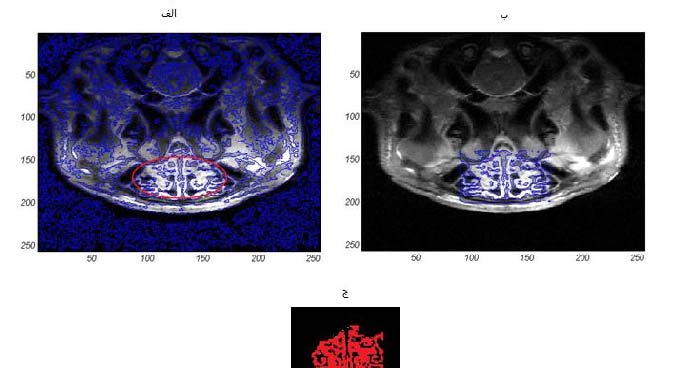 Fig. 5.Segmentation of nasal respiratory tract airways based on local image fitting [23].
Fig. 6. 3D model of trachea volume of guinea pig before injection of Azelastine and after 20, 40 and 60 minutes of injection (from right to left). Using active contours based on local image fitting allows us to level set method to find trachea areas of the same image and segment nasal respiratory tract parts of our images which is again a 3D model is constructed based on these segmentation shown in Figure 5. After detecting nasal respiratory tract results. Finally, we overlap these two 3D models to find out an through continuous slices of MR images, we can create a 3D intuitive concept of nasopharyngeal volume and also to model of the trachea. compare the model which is based on our enhanced level set method with the model rooted from manual segmentation. Figure 7 represents this concept, and as it can be seen, our IV. 3D VISUALIZATION method has meaningful overlaps with the manual segmented method. Another way to compare our results with previous works is The total volume of trachea area before and after injection to find a three dimensional model of trachea area. This way of Azelastine is shown in Table I for different methods. This we can evaluate the total effect of Azelastine drug and figure volume can help the physician to understand the effect of out how the volume of trachea area will vary through time Azelastine in the trachea area. In this table, the total volume sequences. Figure 6 shows trachea volume in three different before Azelastine administration (antigen inhalation) and after times. The first trachea volumetric model is before injection of 1 hour of Azelastine administration is calculated. Note that the Azelastine, and the two others are after 20, 40 and 60 minutes total volume of trachea has an increase before and after of drug injection. With this 3D model, we can estimate the Azelastine administration which shows that swelling of nasal volumetric changes of trachea in order to evaluate the effect of mucosa has a decrease after the injection of Azelastine. The same procedure can be used in order to create a 3D Volumetric comparison of trachea area can be done by model of nasal respiratory tract airways based on our overlapping the results of our proposed method and manual segmentation results for each slices. Therefore results of our volumetric model. For this aim, first a 3D model is detected nasal respiratory tract area from consecutive slices constructed based on manual segmentation of trachea areas can be visualized into a 3 dimensional model as shown in from slices of the MR image. After that, we use our enhanced 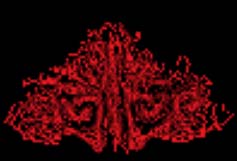 Financial incentives and pharmaceutical prices: The Colombian Mauricio Romero∗ "At a time when money is tight, my advice to countries is this: before looking for places to cut spending on health care, look first for opportunities to improve efficiency" Dr. Chan, Director of the World Health Organization. The Colombian health care system is a competitive insurance market with a standardized health