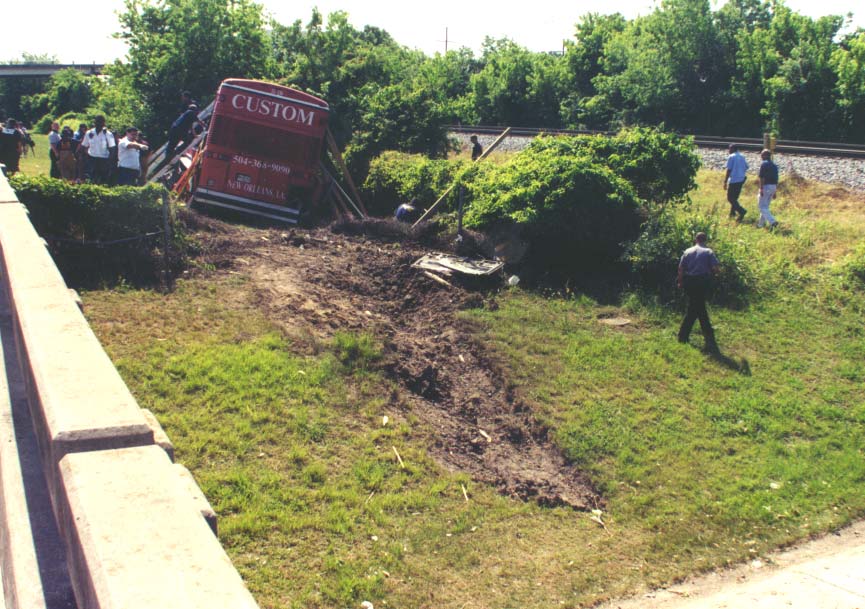 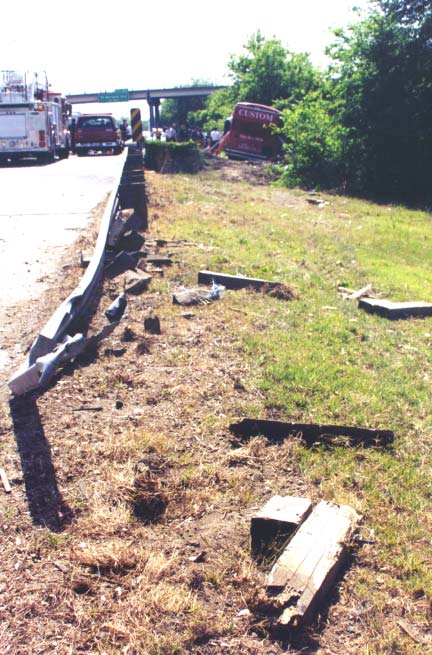 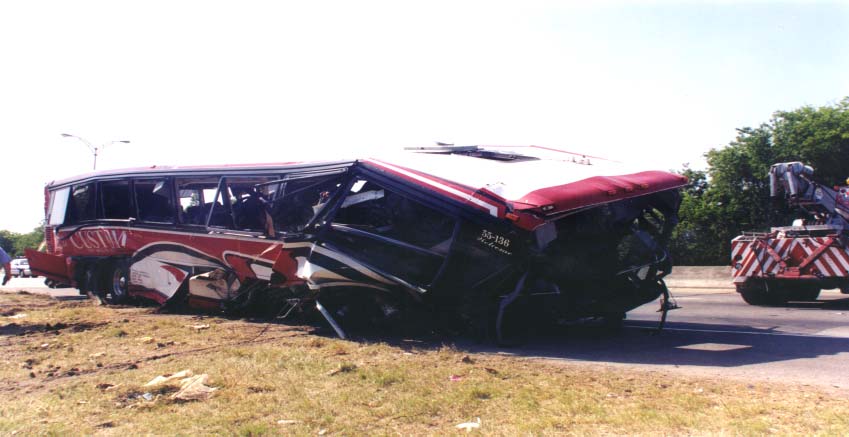 Highway Accident Report
The forward passenger compartment floorboard had been deformed upward toward theinterior roof in the first three rows. The first four left- and right-side window framessustained damage, and the glazing38 was missing or shattered in most.
Emergency responders removed seats 9 and 10, 13 through 18, 21 and 22, and 25 and 26 to extricate surviving and deceased passengers. (See figure 7 for seat layout.39)Seats 1, 2, 7, and 8 sustained partial separation of the vertical mounting leg of the "T"pedestal at the horizontal base that was attached to the seat track due to vehicle crushformation and intrusion. Some, but not all, seats rearward of the third row sustainedvarying degrees of frame damage. Seatbacks of these seats were deflected forward atdifferent angles due to the accident sequence and to emergency responder activity duringrescue operations.
Figure 5. Body damage to bus, which had been moved from its resting position when
this photograph was taken (photograph by the New Orleans Police Department).
One passenger told Safety Board investigators that she had been sitting on the right side of the bus in seat 12 when the accident occurred. She stated that she did not notice anysudden lane changes and that she did not observe other vehicles in the path of the busbefore or after it left the roadway. She said that she recalled seeing the busdriver "slouchdown," and added, "I thought he was reaching for a coke. He came back up then wentdown again. Next thing I remember is waking up in Charity Hospital." 38 Describes glass or other transparent materials used for windows.
39 Due to a lack of responses to a questionnaire mailed out to survivors of the crash and to the high number of passenger fatalities, a passenger seating chart could not be generated for this accident. 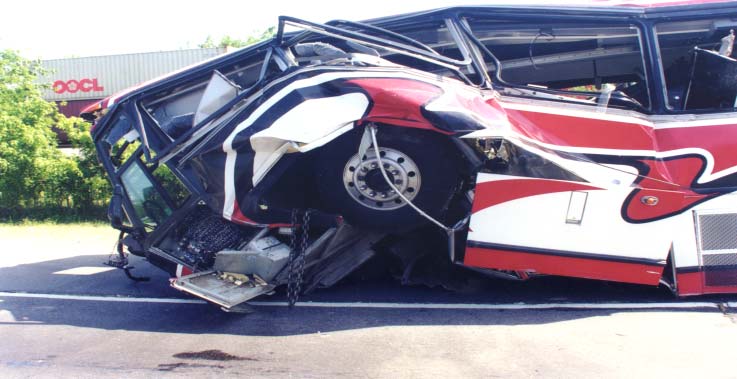 Highway Accident Report
Figure 6. Driver's side view of the damaged bus (photograph by the New
Orleans Police Department).
A second passenger reported that she was seated in the middle section of the bus in an aisle seat at the time the accident occurred. This passenger recalled that the ride was"nice and peaceful"; she did not recollect any maneuvering of the bus before the accident.
She stated that she was thrown forward and landed on top of another passenger in the aisleand that she next awoke in the hospital.
Another passenger stated that she was seated in the rear section of the bus in seat 48, facing rearward, when the accident occurred. She did not recall the bus making anymaneuvers before the accident. For a time after the accident, she did not recall anything,but then awoke, still in her seat, and found emergency responders helping the injured. Shestated that the emergency responders were "there right away." Accident Reconstruction and Simulation
As part of the Safety Board's investigation, simulations were conducted to determine the estimated speed of the bus before leaving the roadway, its speed beforeimpact with the breakaway cable guardrail, its vault speed over the golf cart pathway, andenergy calculations for the crush of the accident bus on the upward sloping embankment.
To crosscheck these calculations and to determine the occupant kinematics, the accidentwas simulated using a Human Vehicle Environment40 system.
The speed of the bus before it left the roadway was estimated using the vault distance, the energy to break the guardrail posts, and witness accounts. Based on the bustrajectory over the golf cart pathway and the marks on the opposite side embankment, thebus's speed before takeoff was calculated at 58 mph. Before the vault, the bus impacted 40 Developed by the Engineering Dynamics Corporation.
Highway Accident Report
Figure 7. Seat layout.
Highway Accident Report
and fractured 11 guardrail posts. Based on the energy dissipated by deforming theguardrail, fracturing the posts,41 and deforming the front of the bus, the bus speed beforehitting the guardrail was calculated at between 58.6 and 61.9 mph. This range correspondswith statements made by the witness following the bus, that it was traveling approximately60 mph before drifting off the roadway.
The simulation study indicated that the bus underwent an 18-mph change in velocity during the initial 100 milliseconds of the impact with the opposite sideembankment. Figure 8 illustrates a time history of the bus's first and second impacts withthe embankment and its slide to a final rest position. The simulation showed that uponinitial impact of the bus with the embankment, simulated passengers located in the frontand rear of the bus were propelled forward with roughly the same amount of force(longitudinal acceleration). However, the vertical accelerations experienced by passengersin the front and rear were different. (See figure 9.) Upon initial impact, passengers at thefront of the bus were forced downward into the seat cushion, while those at the back of thebus were lifted from the seat. The passengers placed in the center of the bus were not asaffected by the vertical accelerations. These acceleration differences help to explain thegreater severity of the injuries and the displacement of the occupants in the front of thebus.
During the second impact, when the back of the bus hit the embankment, longitudinal accelerations were low, but vertical accelerations again increased in theopposite direction for front and rear passengers. Here, simulated occupants at the back ofthe bus were forced downward while those at the front of the bus were elevated above theseats. The upward acceleration of the simulated occupants at the front of the bus, relativeto the bus reference frame, appeared to be critical in facilitating ejection out of the front ofthe bus as the bus continued to decelerate during the slide to final rest.
41 This simulation assumed undecayed wooden posts. 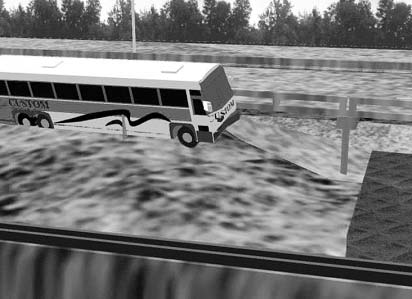 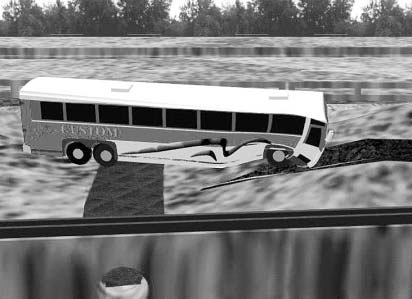 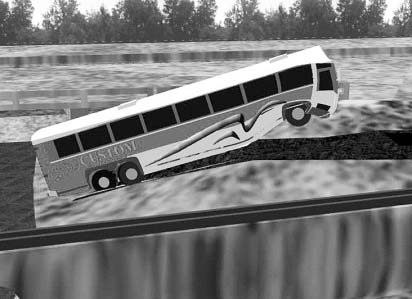 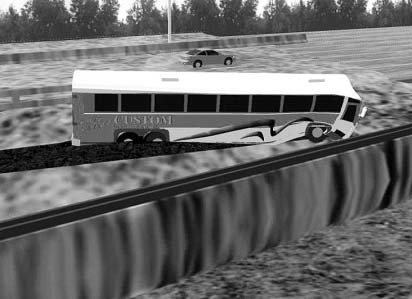