European Drying Conference - EuroDrying'2011
Palma. Balearic Island, Spain, 26-28 October 2011
Influence of Coating and Formulation Variables on the Dissolution Profile
of Diltiazem HCl Extended Release Pellets
A. Bernardino, A. C. P. Simão, E. T. Katayama, M. B. Bertuzzi, N. S. Maria, M. Nitz1
Mauá Institute of Technology (IMT) Praça Mauá, 1, São Caetano do Sul, São Paulo, 09580-900, Brazil Tel.:+55 11 4239 3114, E-mail: [email protected] Abstract: The development of extended release diltiazem HCl pellets is presented. The release rate was adjusted by introducing a subcoating layer prior to film coating with polyvinyl acetate, and replacing some of the microcrystalline cellulose in the core with lactose. The pellets coated with a mass gain of 2.7% Advantia Prime and 12% Kollicoat SR30D showed a zero order dissolution profile for 9 hours. The amount of drug released was 23% after 3 hours, 65% after 9 hours and 73% after 12 hours, which conforms to the Pharmacopeia acceptance table. Keywords: film coating, pellets, modified release, extended release the spraying nozzle (Yang et al., 1992) and the air and coating suspension flow rates. Simply stated, film coating is the process of drying a There are two main types of modified release: suspension while it is continuously sprayed over the sustained and delayed release. The first permits a surface of particles in a moving or fluidized bed. In reduction in dosing frequency compared to the the pharmaceutical industry, the coating of a solid situation in which the drug is presented in a dosage form takes place for either aesthetic or conventional form. The second is the choice when functional reasons. For multiunit dosage forms, also the release of the active ingredient comes sometime known as pellets, film coating is usually performed to other than promptly after administration. The gastro- improve efficiency in treatment by modifying the resistant, also called enteric-release forms belong to drug release profile. The controlled release this class. PH-sensitive enteric coatings have been characteristic is designed so that dosing frequency used routinely to deliver drug to the small intestine may be reduced and the risk of side effects limited by avoiding a higher than necessary drug concentration in the blood (Hamdani et al., 2002; Salsa et al., This work shows the development of extended 1997). There are a great number of variables release diltiazem HCl pellets. Variations on coating involved in this complex process. The challenge of and core formulation were performed in order to film coating is to apply the spray droplets uniformly achieve the desired release rate. and to dry them at the proper rate. MATERIAL AND METHODS There are already many commercial coating suspensions, such as: Aquacoat, Eudragit, Kollicoat Uncoated pellets and Surelease. The suspension blend is chosen based Diltiazem HCl pellets were produced by the on the desired release profile. Kollicoat type SR 30D, extrusion-spheronisation process (Santos et al., for instance, is an aqueous dispersion of polyvinyl Microcrystalline acetate, suitable for a ph-independent release profile (Blanver, Brazil), was used as the main filler of the (Dashevsky et al., 2004). pellets. Methocel (low viscosity hypromellose) was The release profile depends not only on the coating tested as a binder at 2, 3 and 4%, as seen in Table 1. formulation itself but also on the process variables Water was added to the solid mixture of Table 1 in that affect drying. Examples of process variables that the ratio 48 g of water per 100 g of solid, influence the coating efficiency are: the type of fluid approximately. The mixture was granulated in a bed contactor, the temperature and humidity of inlet planetary mixer (Arno, Brazil). The wet mixture was air, the pressure of the atomizing air, the position of extruded in a gravity feed lab-scale extruder (Zelus, Brazil). The rotational speed was 40 rpm and the 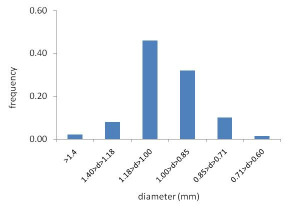 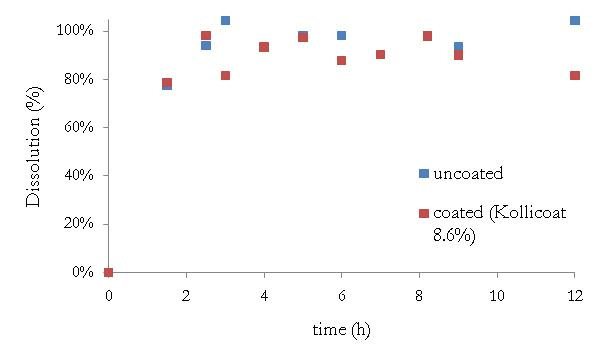 screen opening 0.8 mm. A 500 g-load of material was The acceptance values for drug release are shown in then spheronised on a friction plate (Zelus, Brazil) for 4.5 min at 900 rpm. The granules were then dried in an oven at 50 ºC for 24 hours. For the coating step, Table 2. Acceptance Table 350 g of pellets between 0.85 and 1.40 mm were used. Amount dissolved (%) Table 1. Pellet composition - dry mass fractions Not less than 70% RESULTS AND DISCUSSION Pellets containing from 2 to 4% Methocel, according to Table 1, were all suitable for the extrusion-spheronisation process and the size distributions were The coating suspensions similar. Fig. 1 shows the pellet size distribution for Two different coating suspensions were used with the the formulation containing 4% Methocel. It is clear following commercial powders: Advantia Prime (ISP that 80% of the pellets are between 0.85 mm and Technologies) and Kollicoat SR30 D (Basf). The first 1.18 mm. That narrow size distribution is important is a protective prime coating, which consists of for industrial production. HPMC and HPC. The second is an aqueous dispersion of polyvinyl acetate, used to achieve a ph-independent release profile. Advantia Prime is a pre-blended powder, which should simply be added to water and mixed (6.0% w/w of powder). Kollicoat suspension was also prepared by simply mixing with water (1:1). The coating experiments The experiments were accomplished in a fluid bed Fig. 1. Size distribution (pellets with 4% Methocel) coater column with a Wurster insert (model R-060, Zelus, Brazil). Air suspension coating, known as the Those pellets were coated with Kollicoat SR30D to a Wurster process, involves dispersing solid particulate mass gain of 8.6%. However, when the release core materials in a supporting air stream and the profiles of coated and uncoated pellets are compared, bottom spray coating of the suspended materials. The one can see no difference (Fig. 2). As diltiazem is cyclic process is repeated until the desired coating highly soluble in water, the drug on the surface of thickness is obtained (Anal, 2008). pellets dissolves in the water of the coating layer. As a consequence, pores are formed in the polymer layer A mass of 350 g of pellets was placed in the fluid and the release rate of the drug is not modified. bed. Inlet airflow rate was 30 Nm³/h and inlet temperature was adjusted to 60°C. These values were chosen after preliminary testing. The double-fluid atomizing nozzle has an orifice of 0.7 mm. The atomizing air absolute pressure was 1.5 bar. The coating suspensions were kept under agitation during the coating experiments. The feed rates were 3.4 g/min for Advantia and 7.0 g/min for Kollicoat. The dissolution tests The coated granules were submitted to dissolution studies. USP XXXII (2009) test number 1 for Fig. 2. Release profile of pellets (coated and extended release diltiazem HCl capsules was employed. In this analysis 900 mL of water are used as dissolution medium. Apparatus 2 (paddle) was In order to achieve an extended release profile, a used at 100 rpm. The drug release in the dissolution prime coating layer was applied with Advantia medium was determined by UV absorbance at 237 Prime. The results are shown in Fig. 3. The release profile was modified significantly, which proves that spectrophotometer. the prime layer was really required. 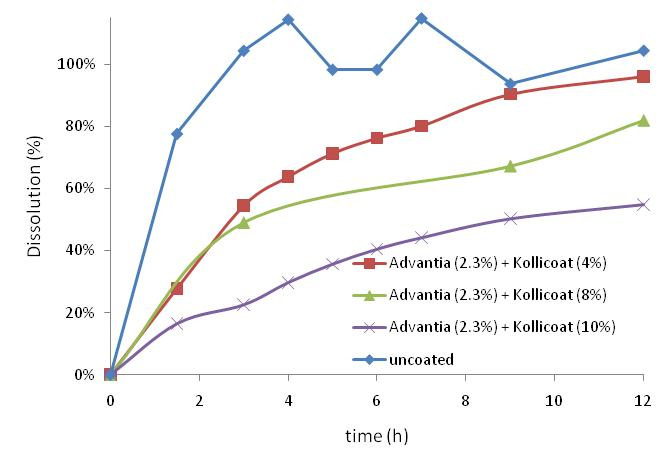 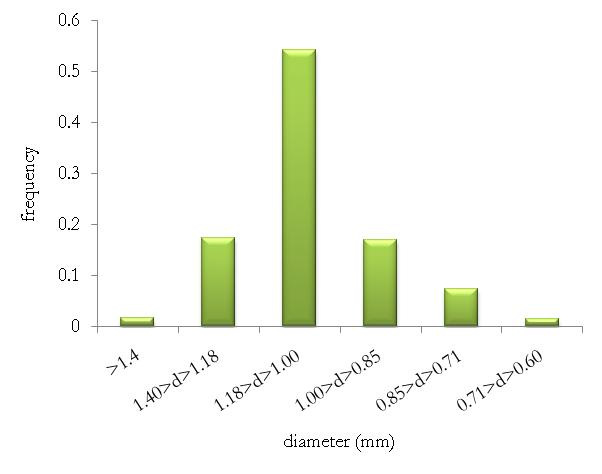 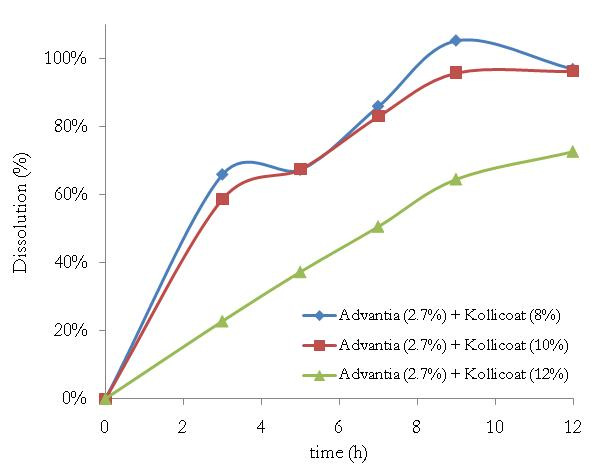 None of the tests conform to the Table 2. The test The higher solubility of the pellets with lactose with 10% mass gain of Kollicoat was close to a zero increased the release rate considerably. That order kinetic release for the first 6 hours but the behaviour is shown in Fig. 5. A thicker layer of amount of drug dissolved after 12 hours was only Kollicoat was needed to extend drug release. With 55%. The other two tests (4 and 8% Kollicoat layer) Kollicoat mass gain lower than 10%, approximately showed a too fast release rate for the first 3 hours and 60% of the drug was released in 3 hours. With a therefore did not conform to the acceptance table. Kollicoat mass gain of 12%, a zero order dissolution rate was achieved for 9 hours, which conforms to the limits established in Table 2. A subcoating layer with Advantia Prime (2.7% mass gain) was effective in reducing the amount of Kollicoat SR30D needed to modify the release of diltiazem HCl. The amount of polymer used to achieve a zero order release kinetic was 12%. The use of 5% lactose in the core made the pellets more soluble and increased the amount of drug dissolved Fig. 3. Release profile of pellets with prime and modified release coatings ACKNOWLEDGEMENTS To overcome this obstacle, part of the MCC was replaced with lactose. The idea was to make the Authors wish to acknowledge FAPESP for the pellet more soluble and increase the amount of drug financial support and Mauá Institute of Technology. released after 12 hours. Lactose accounted for 5% of the total mass, reducing the percentage of MCC to 66%, keeping Methocel at 4% and diltiazem HCl at Anal, A. K. (2008), Controlled-Release Dosage Pharmaceutical Manufacturing Handbook, Wiley-Interscience, New Jersey, 1370p. Dashevsky, A.; Kolter, K.; Bodmeier, R. (2004), pH- Independent Release of a Basic Drug from Pellets Coated with the Extended Release Polymer Dispersion Kollicoat SR 30 D and the Enteric Polymer Dispersion Kollicoat MAE 30 DP. Europ. J. Pharm. Biopharm., v.28, n.1, pp. 45-49. Hamdani, J.; Moës, A. J.; Amighi, K. (2002), Development and evaluation of prolonged release Fig. 4. Size distribution (pellets with 5% lactose) pellets obtained by the melt pelletization process, Int. J. Pharm., v.245, pp.167-177. The size distribution was only slightly affected by this change, as shown in Fig. 4, so that more than Salsa, T; Veiga, F.; Pina, M. E (1997), Oral 80% of the pellets are still between 0.85 mm and Controlled-Release Dosage Forms. I. Cellulose Ether polymers in Hydrophilic Matrices. Drug Dev. Ind. Pharm., 23(9), pp.929-938. Santos et al. (2004), Obtenção de pellets por extrusão e esferonização farmacêutica – Parte I – Avaliação das variáveis tecnológicas e de formulação, Rev. Bras. Ciências Farm., v.40, n.4, pp.455-470. Pharmacopeia. Ghebresellasie, I. (1992), The Effect of Spray Mode and Chamber Geometry of Fluid-Bed Coating Equipment and Other Parameters on an Fig. 5. Release profile of pellets with 5% lactose Aqueous-Based Ethylcellulose Coating. Int. J. Pharm., v.86, n.2-3, pp.247-257.