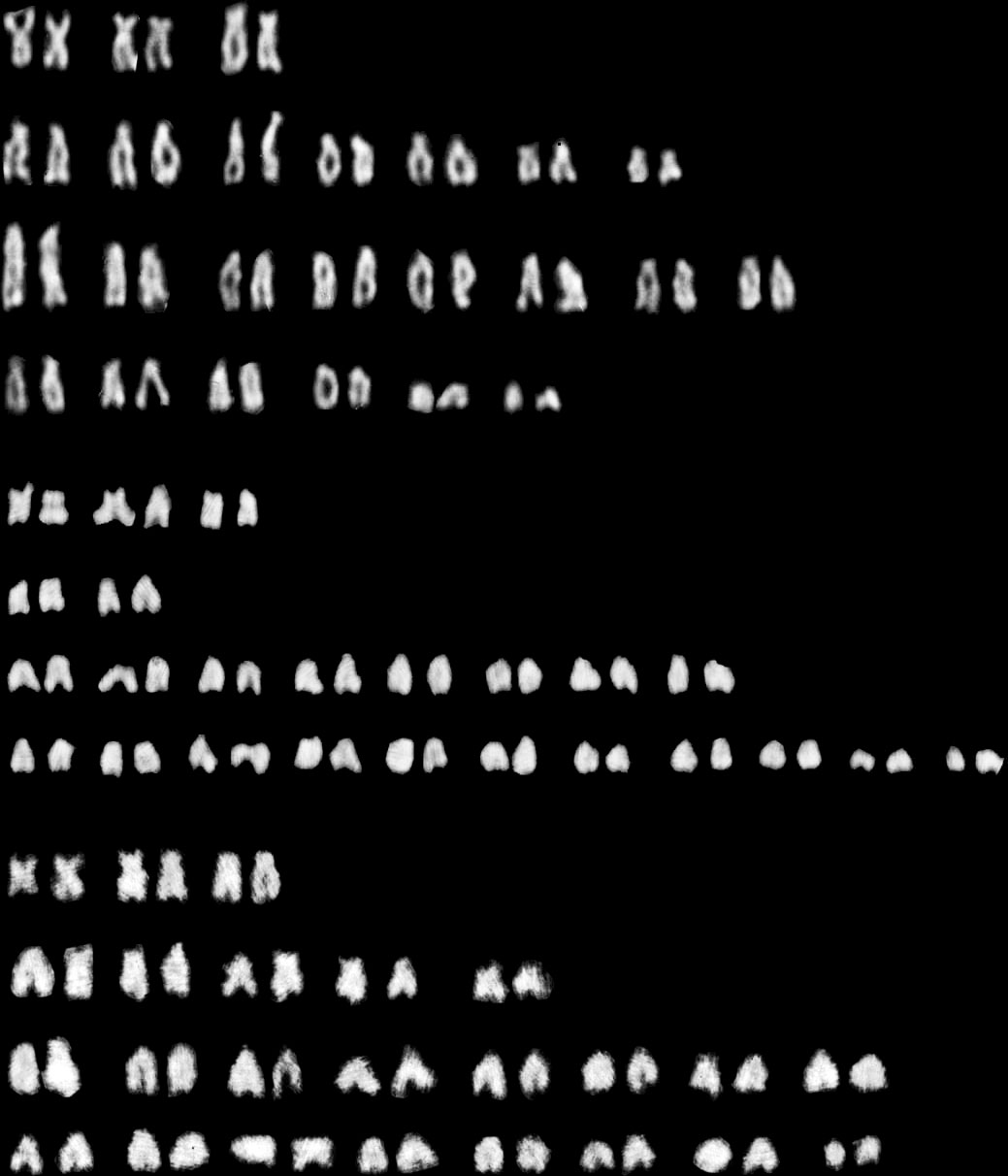 Fig. 3.
Karyotypes. A, Orestias agassizii; B, O. ascotanensis; C, O. parinacotensis.
chromosome numbers and the chromosome formulae are different between O. piacotensis and O. chunga- rensis (Table 4). No variations in chromosome numbers were observed among metaphase plates obtained from various individuals of the same species, nor did we fi nd differences between males and females. Our meristic analyses carried out on ontogenetic series showed agreement with original descriptions of the species (Arratia 1982, Parenti 1984b, Vila & Pinto 1986, Vila 2006). There were no observed meristic differences between juveniles and adults. Our results showed a high degree of among-species overlap in meristic characters, making it diffi cult to discriminate species based on both univariate meristic values and multivariate functions of those values. Only O. agassizii and O. ascotanensis could be distinguished at the univariate level. Four species, O. ascotanensis, O. agassizii, O. laucaensis, and O. chungarensis, had high rates of correct classifi cation in the linear discriminate function analysis, whereas O. parinacotensis and O. piacotensis did not. The species located at 18°S, particularly O. piacotensis and O. parinacotensis, show weak morphological divergence, possibly as a result of recent geographic isolation. On the other hand, the karyotype evidence shows that each of the fi ve species of Orestias studied have 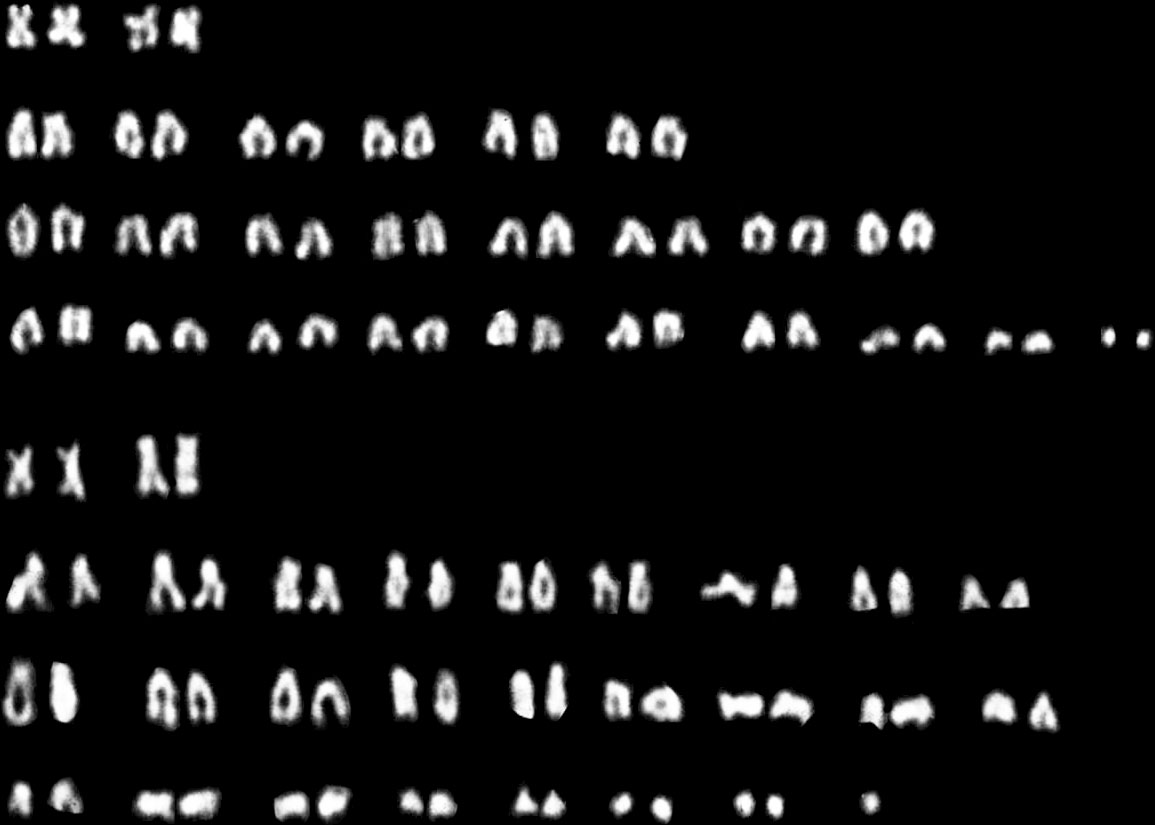 Fig. 4.
Karyotypes: A, Orestias piacotensis; B, O. chungarensis. mc, microchromosomes.
a characteristic karyotype, with differences in chromosome number or chromosome morphology, or both. Karyological data on the Orestias agassizii complex are scarce. Lueken (1962) described the presence of 24 meiotic bivalents in O. agassizii from Lago Titicaca (Puno). Arratia (1982) reported the karyotypes of O. laucaensis from Río Lauca as 2n = 51-52 and O. parinacotensis from the Bofedal de Parinacota as 2n = 48. Our results confi rm 2n = 48 for O. parinacotensis and O. agassizii from the Salar de Huasco to the southern extreme of the distribution of this species. Our results for O. ascotanensis extend the 2n = 48 chromosome number of this species to the southern Altiplano. Although O. agassizii, O. ascotanensis, and O. parinaco- tensis had 2n = 48 chromosomes, they differ in the proportion of subtelocentric and telocentric chromo- somes, resulting in different chromosome formulas. On the other hand, O. piacotensis, O. chungarensis, and O. lauca ensis (Arratia, 1982) form a group of species with high diploid numbers (2n = 51 and 2n = 55) and with microchromosomes. Two species, O. piacotensis (2n = 52) and O. parinacotensis (2n = 48), have divergent karyotypes, but showed no morphological divergence, even in the multivariate analysis. The variation we observed in numbers of uniarmed chromosomes of Orestias might be explained by pericentric inversions and addition or loss of constitutive heterochromatin. The number of chromosome arms is conserved (NF = 54), even among species with different diploid numbers (Table 4). This suggests that Robertsonian rearrangements may have played a role in the chromosome evolution of these species. Karyotypic information on the family Cyprinodontidae is limited, with Cyprinodon being the best studied group. In that genus both the diploid number (48) and chromosomal morphology are conserved (Nirchio et al. 2003). Chromosomal rearrangements such as those proposed herein for Orestias of the southern Altiplano appear to have been important in chromosomal evolution in other groups of killifi sh such as Cynolebias (García et al. 2001, García 2006) and Chromaphyosemion (Völker et al. 2005). The presence of microchromosomes in the karyotype of three species of the agassizii complex appears to be unique among cyprinodontids. The microchromosomes may correspond to supernumerary chromo- somes, since B or supernumerary chromosomes (macro or micro) have been reported in a broad range of fi sh species. Venere et al. (1999) suggested that many of the fi sh species which have B chromosomes are distributed neotropically, particularly the perciforms and siluriforms. In contrast with our results, the supernumerary chromosomes in many of the cases occurred in only a few individuals of a popula- tion (Feldberg et al. 2004), or in one population along the extent of the distribution (Moreira-Filho et al.