Childs Nerv SystDOI 10.1007/s00381-013-2341-z Surgical management of chronic traumaticpseudomeningocele of the craniocervicaljunction: case report Josué M. Avecillas-Chasin & Mwanabule Ahmed &Eric Robles Hidalgo & Luis Gómez-Perals Received: 19 November 2013 / Accepted: 2 December 2013 # Springer-Verlag Berlin Heidelberg 2013 Restoring the normal pattern of CSF circulation should be Purpose Chronic traumatic pseudomeningocele (PM) is a rare the aim of any neurosurgical intervention.
complication of gunshot injuries of the craniocervical junctionin pediatric patients. Impairment of the CSF dynamics may Keywords Pseudomeningocele . Craniocervical junction .
cause severe symptoms and should be treated.
CSF fistula . Intracranial hypotension Methods We report the case of a 6-year-old girl who wasaccidentally shot in the neck during tribal clashes. On beingadmitted, she was neurologically intact with cerebrospinal fluid (CSF) leakage through the wounds. She underwentprimary closure of the wounds in a rural medical facility. After Gunshot injuries are common in developing countries. There two episodes of meningitis, CSF leakage resolved spontane- is currently a trend in tribal societies to use guns during ously. Nine months later, the patient was presented with a clashes, which not infrequently results in significant morbidity disfiguring mass growing in the posterior neck, severe head- or death in affected individuals [, ]. Gunshot injuries can aches, and constitutional symptoms such as loss of appetite involve the central nervous system and result in devastating and a failure to thrive.
neurologic damage, vascular injury, and meningitis [, Results Neurosurgical intervention was performed with the Traumatic pseudomeningocele (PM) is a rare complica- patient in the prone position. Occipital pericranium graft was tion of gunshot injury to the spine that can be managed by used to repair the defect, and the cavity of the PM was conservative measures and cerebrospinal fluid (CSF) diver- obliterated with muscle layers. The patient's symptoms im- sion in the earliest stages ]. Conservative management is proved at 1 year follow-up without PM recurrence.
therefore usually ineffective in the chronic stages of PM after a Conclusion This is a rare presentation of gunshot injuries in cavity is established, with resulting intracranial hypotension an environment with limited neurosurgical resources.
and CSF hypovolemia Here, we report a case of chronictraumatic PM of the craniocervical junction (CCJ) in severelysymptomatic child with severe symptoms due to a neck mass J. M. Avecillas-Chasin (*) effect and impairment CSF dynamics. Surgical repair of the Department of Neurosurgery, Institute of Neurosciences, Hospital traumatic pseudomeningocele resulted in a symptom-free Clínico San Carlos, Prof. Martín Lagos s/n, 28040 Madrid, Spain J. M. Avecillas-Chasine-mail: [email protected] M. AhmedDepartment of General Medicine, Coast Province General Hospital, A 6-year-old girl was involved in tribal clashes and was injured laterally by a gunshot in the posterior aspect of theneck at the CCJ level. The patient remained neurologically E. Robles Hidalgo L. Gómez-Perals intact and clear fluid was leaking from the wound upon Department of Neurosurgery, Hospital Universitario Nuestra Señorade la Candelaria, Santa Cruz de Tenerife, Spain reporting to the hospital. The patient underwent primary 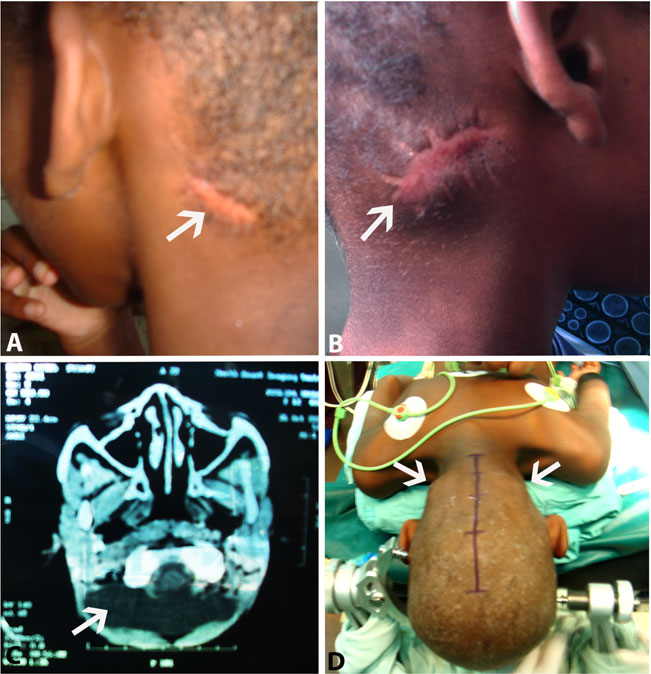 closure of the wounds in a rural medical facility. Three days fluid drained, allowing us to obtain good visualization of the later, the wound became infected and CSF leakage from the defect between the inferior border of the foramen magnum and wound was evident. One month later, after two episodes of the superior border of the posterior arch of C1. The extensive meningitis, CSF leakage improved spontaneously. Nine cavity had no free dural edges, and the posterior aspect of the months later, the patient was readmitted for a disfiguring medulla oblongata was entirely exposed (Fig. pulsating mass on the neck, severe lingering headaches, loss To repair the dural defect, an occipital 6×3 cm pericranium of appetite, and failure to thrive during the last 6 months. A graft was obtained and sutured to the border of the defect with head computed tomography (CT) scan showed a PM of the silk stitches at a 3 mm interval. To obliterate the dead space, the CCJ widely communicated with the cisterna magna (Fig. ).
three muscular layers were reapproximated with sutures over On examination, the patient was alert with reactive pupils.
the pericranium graft covering the defect. The fascial plane then Furthermore, cranial nerve examination revealed no abnormal- was closed with interrupted sutures. Finally, the skin was closed ities, including no evidence of paresis or hypoesthesia in the with vertical mattress stitches. At the immediate postoperative limbs. After a thorough evaluation of the case, we decided to period, the patient was neurologically intact without CSF fistu- repair the defect due to the lack of improvement 9 months after la. Eight months later, the patient remained asymptomatic with- the injury. With the patient in prone position and the head fixed out PM (Fig. ). Due to financial issues, the patient has not been with the three-point Mayfield-Kees fixation device, a midline able to obtain a control CT scan of the head. However, due to skin incision was performed from 4 cm above the occipital the absence of symptoms and no PM recurrence, control imag- protuberance to the C2 vertebrae (Fig. We performed a ing studies are not mandatory for this patient, mainly in devel- careful dissection of cervical soft tissues and muscles. A T- oping countries with healthcare services costly for patients.
shaped incision was made at the fascial plane and muscles.
Then, a subperiosteal dissection of the cervical spine wascarried out in order to expose the area from occipital squama to the spinous process of the C2 vertebrae. Thus, we gainedaccess to the whole occipitocervical area which was occupied We present a case of traumatic PM as a result of gunshot by a large cavity full of CSF. The cyst was penetrated and the wound in the neck that caused severe symptoms during Fig. 1 Photograph of the childwith traumatic PM. a The scars ofthe penetrating injury in theposterior aspect of the neck areshown with the typical smallerentrance wound of the bullet andb larger exit wound. c CT scan ofthe head showed the PM (arrow).
d The child was operated in proneposition with midline incision4 cm over the occipital eminenceto the C2 vertebrae. We can alsosee the swelling of the scars due toPM (arrows) 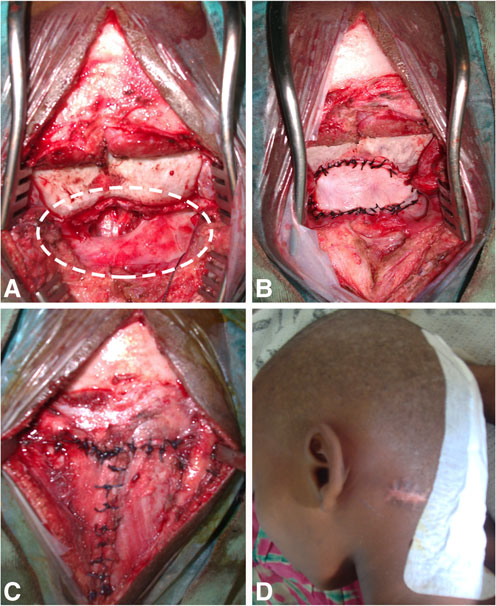 This article appeared in a journal published by Elsevier. The attached copy is furnished to the author for internal non-commercial research and education use, including for instruction at the authors institution and sharing with colleagues. Other uses, including reproduction and distribution, or selling or licensing copies, or posting to personal, institutional or third party