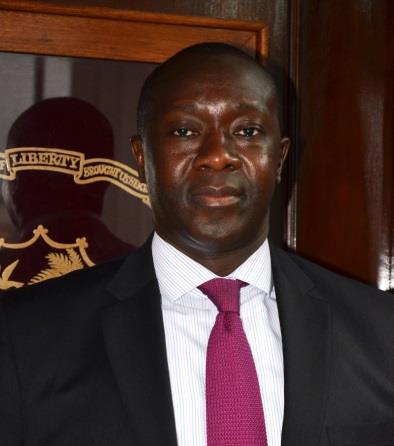 The Ebola crisis did not only weaken government capacity to ideally generate revenue but also
imposed additional pressure on public expenditure. The revenue reduction mainly resulted from
a slump in economic activities with trickle-down effects on employment and by extension, a
shrinking of the tax base. In addition, Government revenues from tariff and customs from major
sectors such as agriculture, manufacturing, mining and services also became threatened by risk
aversion behaviour of investors and consumers, and restrictions on movement. These actions led
to a loss of more than 20 percent of projected Government revenue for fiscal year 2014-2015,
with extended impacts on fiscal year 2015-2016.
As Government revenue generating capacity shrunk, expenditure demand increased. The rising
expenditure demand was associated with maintaining stability in the health sector, creating
awareness and sensitization, proving sanitation materials and logistics and supplies for health
service delivery as well as providing incentives and other benefits for healthcare workers.
While donors and other friendly contributed immensely to the cost of fighting the Ebola virus disease, Government had to initially commit US$20 million from the national budget to address the crisis. The deterioration in the fiscal position of Government was accompanied by reduced activities in the real sector of the economy. The hospitality industry which is an important source of Government revenue became one of the industries initially highly hit by the outbreak. Average hotel occupancy dropped from over 70 per cent before the crisis to 30 per cent as at September. At the same time, weekly commercial flight dropped from 27 between January and August 2014 to only 6 from the beginning of September 2014. In addition, inflight visitors in 2014 dropped significantly by 91 per cent to 3,500 persons, compared to the 39,118 admitted in the country in 2013. Since government taxes are collected on the number of occupancy, the reduction in these activities signal significant loss of revenues. While the influx of expatriates in response to the crisis may have restored some levels of normalcy to the industry, what remains of concern is maintaining the health of the sector when the expats shall have returned after the declaration of the country as Ebola-free. Another sector hard hit by the crisis in 2014 was agriculture. The disruption of agriculture and fisheries activities which contribute about 26 per cent of GDP greatly impacted exports earnings. The production and shipment of rubber, the single most important agricultural export commodity was greatly affected due to disruptions in smallholder farming activities, and difficulties in getting produce from quarantine zones to the port for shipment. Activities in the mining sector which is largely driven by iron ore exploitation by China Union and Arcelor Mittal and contributes significantly to revenue generation, were disrupted due to expatriate repatriation and travel restriction placed as a result of the Ebola outbreak. In 2013, the sector accounted for 17 per cent of GDP and 56 per cent of total exports (US$559 million). In 2014, however, reduction in export earnings due to a fall in iron-ore price on the international markets from US$134.9 per metric ton in 2013 to US$98.6 per metric ton inadvertently impacted domestic revenue mobilization. Thus, growth in the sector was estimated to have decline in 2014 from an earlier 4.3per cent projection to about 0.1 per cent in real terms. The contraction can be mainly attributed to reduced concession activities accompanied by the delay in phase 2 expansion work by the largest iron ore concession, Arcelor Mittal. 3.3Labor Market
According to estimates from the Ministry of Labour and the ILO econometric model (2014), the total number of work force in the three sectors of the Liberian economy was estimated total of 1.5 million in 2014 (see Table 3).This represents a 3 per cent increase compared to estimates for 2013. Of the total employment, the agriculture sector is estimated to have accounted for 45 per cent, followed by the services and industry sectors with 44 per cent and at 11 per cent respectively. Compared to 2013, employment created by the agriculture, services and industry represent increases of about 2 per cent, 4 per cent and 5 per cent, respectively. As evident from Table 3, employment in the economy is gradually trending towards gender balance as female workforce participation rate is estimated at 47 per cent in 2014. The Ministry of Finance & Development Planning has initiated collaboration with the Ministry of Labour to undertake a more robust method of tracking employment through enforced labour inspection and monitoring on a regular basis to ensure better understanding of the structure of the labour market of the country. Table 3: Employment by Sector and Gender
Employment by Sector & Gender ('000') MoL, ILO and Author's calculation 2014 3.3.1 Inflation

Figure 2 indicates annual inflation rates in Liberia from 2006 to 2014, including projection for
2015. The graph shows that inflation peaked as high as 17 per cent for the period 2007 -2008as a
result of the global financial and food crises and rising energy prices. As global commodity
prices stabilized following the crisis, inflation moderated and remained in single digits between
2009 and 2013.
Figure 2: Annual Inflation, 2006-2015

Electricity plays a vital role in the socio-economic development of a nation. As both agricultural
and industrial activities increase, the demand for energy similarly increases. Thus the
Government has identified the provision of a greater access to energy as an important step to
grow the Liberian economy and improve the living standard of the people. As a consequence,
progress is being made to provide energy to as many customers as possible. In 2013, the total
number of power subscribers amounted to 18,510 which represent a 38.68 per cent increase over
the 2012 customer base. The increase was attributable to the streamlining of processes at the
Liberia Electricity Corporation (LEC) which resulted in the creation of an electronic database.
Moreover, to reduce operating cost and delinquency payment, the prepaid metering system was
introduced. The total benefit of these reforms has seen an increase of 14.53 percent in total kilo-
watt-hour (KWH) supplied in 2013 as compared to 2012.
Table 21: Electricity Indicators, 2010-2013
Total Number of Customers Total KWH of Power Supplied Unit Cost of Power (US$) Demand Forecast (%) Source: Liberia Electricity Corporation
Achieving nation-wide access to electricity has been set as a major priority by the Government.
Access to electricity is particularly important to human development as sustainable provision of
electricity frees large amounts of time and labor and promotes better health and education. Hence
the Government along with its development partners has committed resources towards the
rehabilitation of the Mt. Coffee Dam and the importation of electricity from the Ivory Coast.
Over 95 percent of the Liberian population lack access to electricity while electricity
connectivity in rural Liberia is non-existent. Currently, access to the national power grid is
restricted to a few communities in Monrovia and Ganta. The connected communities in
Monrovia are Bushrod Island, Buzzi Quarter, Clara Town, Congo Town, Gardnerville, Jamaica
Road, Logan Town, Monrovia, New Kru Town, New Port Street, Paynesville, Point Four,
Sinkor, Slipway, St. Paul Bridge, Vai Town and West Point while the connected community in
Ganta is Ganta City. Currently, all of the LEC subscribers are prepaid. Table 22provides a
categorization of the LEC power subscribers.
Table 22: LEC Customers Segmentation
Customer Segmentation Government of Liberia Non-Governmental Organization Public Corporation Liberia Electricity Corporation Prepaid Customers Source: Liberia Electricity Corporation