Project report
Project Title: Determination of the emergence pattern and injuriousness of
Spotted Maize Beetle Astylus atromaculatus (Coleoptera:
Melyridae) adults on grain sorghum.
Project Manager: Prof. H. Du Plessis
Co-workers:
Prof. J. van den Berg Project duration: 1/12/2010 – 30/11/2012
Background and Explanation of project
Insect pests attacking panicles of sorghum are very damaging since they affect crop development at a late stage and have direct harmful quantitative and qualitative effects on grain yields (Harris, 1995). Adult spotted maize beetles (Astylus atromaculatus Blanchard) (Coleoptera: Melyridae) are abundant from December till March (Drinkwater, 1997), which coincides with the grain sorghum producing Astylus atromaculatus has only one generation per year. The first beetles emerge from their pupal cells under the soil surface from approximately mid-December onwards. Their numbers increase rapidly, peaking in January and February. Newly emerged beetles aggregate and hang in clusters on leaves of young maize plants, certain grasses and weeds, and on immature sorghum heads. Adults fly actively and invade maize and sorghum fields as plants commence tasseling and pollen becomes available (Drinkwater, 1998). Effective control of Astylus beetles is hampered by unknown ecological aspects. For example, it is not known if beetles emerging from pupal cells remain in the same field or if crop fields are invaded from elsewhere. The behavioural responses of the beetles to confinement in mesh cages on sorghum panicles caused previous attempts to determine its injuriousness to be unsuccessful. Insecticide applications will have to be accurately timed if there are large scale migrations of these beetles to sorghum fields from other crops or surrounding grass lands. On the other hand, if they emerge from the same field which they infest during the flowering stage it will be possible to do carefully timed insecticide applications against this pest. No accurate information is available on the emergence pattern of these beetles during the sorghum production season although it is known that they invade fields during the flowering stage. If beetles emerge from the same field that they infest (in other words no mass immigration) the planting of another crop (such as maize) of which flowers are also damaged but without any economic impact, may help to control the pest. Furthermore, if no mass migration occurs, then certain soil cultivation practices could be employed to suppress this pest. Since Astylus beetles have only one cycle per annum, an effective control measure can have a huge impact in suppressing damage caused by this pest in following years. Knowledge on the emergence pattern and possible immigration of these beetles into sorghum fields can therefore contribute to effective control of Astylus beetles. Beetles feed on grain sorghum inflorescences, which result in chaffy panicles due to reduced pollen availability and damage to developing grain. Loss of seed takes place as a result of the activity of beetles on panicles. Apart from direct yield losses caused by beetles, damaged grain show secondary fungus infections. Grain mold pathogens have been associated with losses in grain mass (Castor & Frederikson, 1980; Hepperley, Felciano, & Sotomayor, 1982), grain density (Ibrahim, Nyquist, & Axwell, 1985) and percentage germination (Maiti, Raju, & Bidinger, 1985). A research project was previously funded by the Sorghum Trust and conducted by the authors of this study on the efficacy of insecticides registered for control of Astylus beetles (gamma-BHC and mercaptothion), H. armigera (esfenvalerate, permethrin, cypermethrin, lambda cyhalothrin, deltamethrin and methomyl) and aphids (endosulfan and demeton-S-methyl) on grain sorghum. Significant differences in insecticide efficacy were observed but insecticides were generally ineffective. Gamma-BHC was only 53 % effective, but methomyl, registered for control of H. armigera in sorghum was 100 % effective. Since the residual action of this insecticide is short and the possibility of reinfestation by beetles exists, control may not be effective over the long term. Economic threshold levels can be determined which will result in optimal timing of insecticide applications. This will ensure effective control at a reduced number of insecticide applications which will be economically advantageous to producers. To determine the level of damage and possibly an economic threshold level, experiments under controlled levels of infestation per sorghum panicle is needed. Previous attempts were, however, unsuccessful due to the behavioural response of A. atromaculatus beetles to confinement in mesh cages on panicles. When confined, beetles did not feed on ears and aggregated on the mesh cage itself. Preparatory technique development is therefore essential to address this behavioural response before trials can be executed to ensure reliable results. The objectives of this study were therefore to develop techniques and do a preliminary study to assess the damage caused by these beetles to sorghum. Specific aims were to:
 determine what proportion of Astylus beetles present in fields emerge from pupal cells in the same field (Year 1 and 2)  determine the emergence pattern of beetles over the season (Year 1 and 2)  develop a caging technique on sorghum panicles that will facilitate future study of this pest (Year 1)  to assess damage caused by these beetles to sorghum panicles during the flowering, soft and hard dough stages (Year 1 and 2)  Monitor A. atromaculatus flights by means of volatile compounds that are attractive to beetles (Year 2) Additional aims were added during the study to interpret the results obtained. Additional aims were to:
 sample A. atromaculatus adults in mass  record A. atromaculatus on grasses outside a sorghum field Material and methods
1. Astylus atromaculatus beetle emergence pattern
Year 1 and 2
Ten cages (1.5 (l) x 0.5 (w) x 0.3m (h)) (Fig. 1) was placed randomly in one sorghum and three near-by maize fields at the ARC - Grain Crops Institute, Potchefstroom (26°44'S; 27°05'E), North-West province. This was done from 15 November 2010 to 28 February 2011 and again from 15 November 2011 to 28 February 2012, respectively. Two of the maize fields used in the 2010/2011 season were planted with maize and the third with soybean during the previous season. The sorghum field was planted with sorghum for the second year. All three maize fields used in the 2011/12 season were also planted with maize during the previous season and the sorghum field was planted with sorghum for 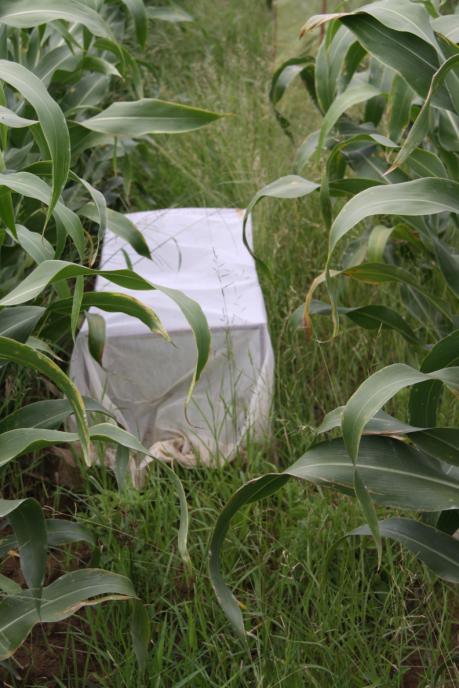 the third consecutive season. The cages were monitored weekly and the number of emerging beetles recorded. Fig. 1 Cage to determine emergence patterns over time of A. atromaculatus inside a
2. Height of exclusion plots
Exclusion cages (3 x 3 m2) were constructed with PVC pipes in a sorghum field with a high natural infestation of A. atromaculatus at Potchefstroom (Fig. 2). There were three treatments, viz. cages with commercially available mosquito netting put up from soil level to a height of 1.2 m and 2.4 m respectively and an open cage with no netting that served as the control treatment. Cages contained approximately 60 panicles of which most were flowering at the onset of the trial. Treatments were replicated nine times. All beetles on panicles inside each cage were removed at the onset of the trial. The numbers of beetles per cage were subsequently determined at 1-day intervals for a period of nine days. Beetles occurring inside cages were removed and released at least 3 m away from the cages after data were collected. 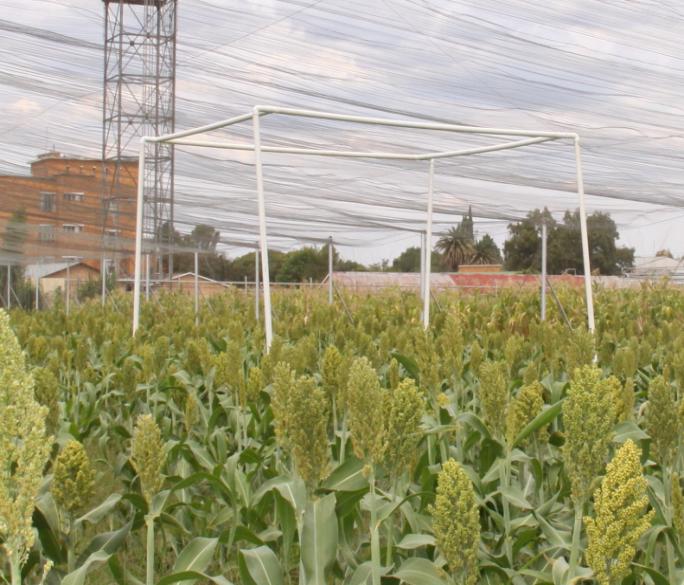 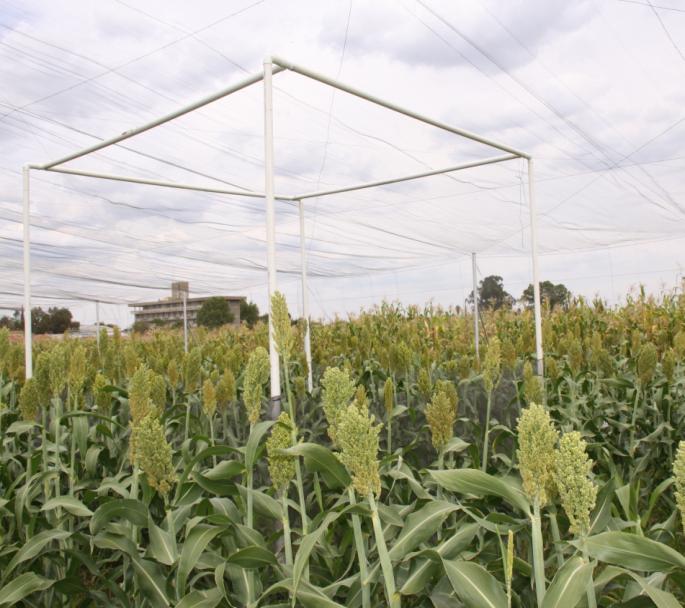 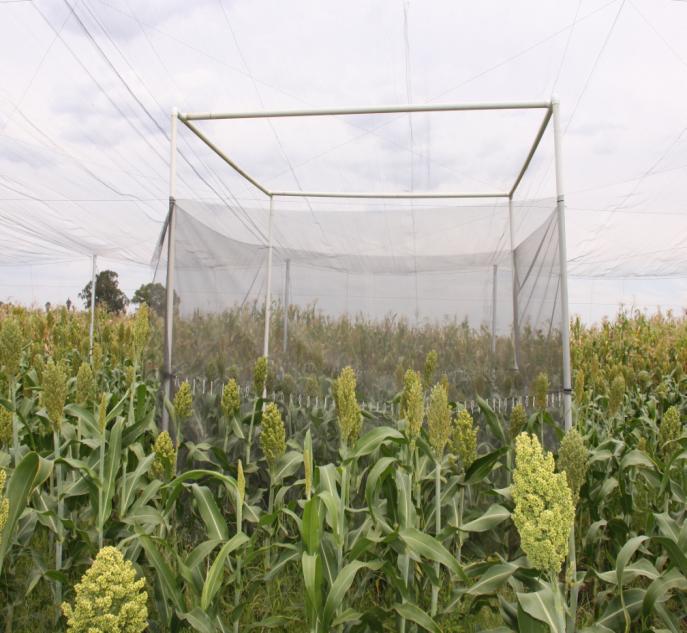 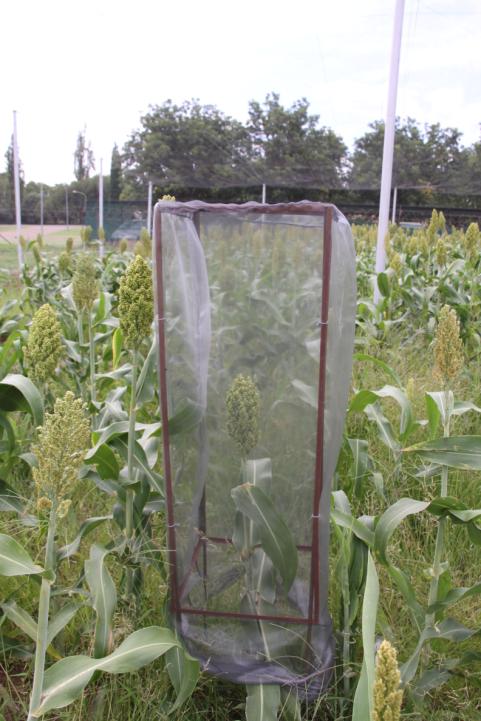 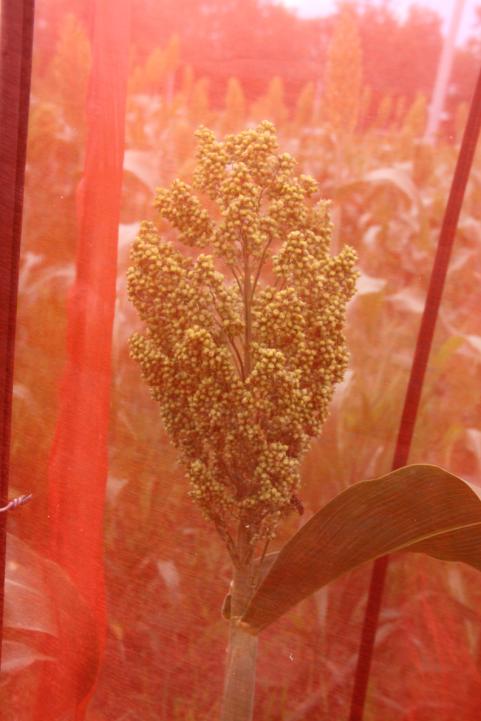 3. To develop techniques to confine A. atromaculatus beetles on sorghum
panicles without disturbing them/changing their behaviour
a) Size and colour of cages to determine the optimum type of cage Sorghum was planted in pots and confined in cages (2.0 (l) x 1.0 (w) x 2.5m (h)) at the onset of flowering during January 2011. Yellow, red, grey, and white cages were evaluated. Adult Astylus beetles were collected from sorghum and maize fields and used in this experiment. Sorghum panicles were infested at a level of 30 beetles per panicle. There were 10 replications per treatment. Behaviour of the beetles was recorded at 1-day intervals for a period of four days after infestation. The trial was repeated under field conditions during March 2011. Yellow, red, grey and white cages (0.5 (l) x 0.5 (w) x 1.6 m (h)) (Fig. 3) were evaluated. Individual sorghum panicles were confined with cages and infested at a level of 20 beetles per panicle. Almost all panicles in the field were in the milk to soft dough stages and the beetles were nearing the end of their life cycle. The numbers of beetles which abandoned the panicles to sit against cages were subsequently determined at 1-day intervals for a period of four days after infestation. Fig. 3 Different coloured panicle cages used in a field experiment.
4. Assessment of damage caused by A. atromaculatus beetles to sorghum
panicles
Thirty 3 x 3 m2 net exclusion cages of 1.2 m high were constructed in a sorghum field at Parys, Free State province (26º58'S; 27º22'E). Cages contained approximately 60 flowering panicles. All beetles on panicles inside each cage were removed at the onset of the trial. Ten areas of similar size with flowering panicles were demarcated in the same field. Astylus beetles occurring in these areas were counted at four day intervals with minimum disturbance. Ten cages were removed from panicles when in the soft dough stage as well as a further 10 cages when panicles were in the hard dough stage. The remaining 10 cages served as the uninfested control treatment. Natural infestation by Astylus beetles was allowed in the areas where the cages were removed. 5. Monitor A. atromaculatus flights with a volatile compound
Weekly field trapping of A. atromaculatus adults was conducted at Potchefstroom and Parys from January to March 2012. Traps consisted of yellow plastic buckets (17 cm wide and 12 cm deep). Each bucket was filled to about two-thirds full with a 1% solution of Tween 80 baited and each trap was baited with or without 2- phenylethanol (volatile compound) (Fig. 4). This chemical is an antennally active sorghum panicle volatile which was released from the plastic bait-sachets at a rate of approximately 4.2 mg/day. Trap catches were compared to unbaited control traps. Twelve traps were placed per field with a 20 m inter-trap spacing and the first trap was situated 20 m from the side of the field. The traps were set up at 1.2 m above soil level. Trapped insects were removed after 24 hours and counted. Repeated measures ANOVA was used to analyse the number of beetles sampled in baited and unbaited traps over time using STATISTICA version 10 (Stasoft, Inc., Tulsa, Oklahoma, USA). Bonferroni correction was used to adjust for multi means 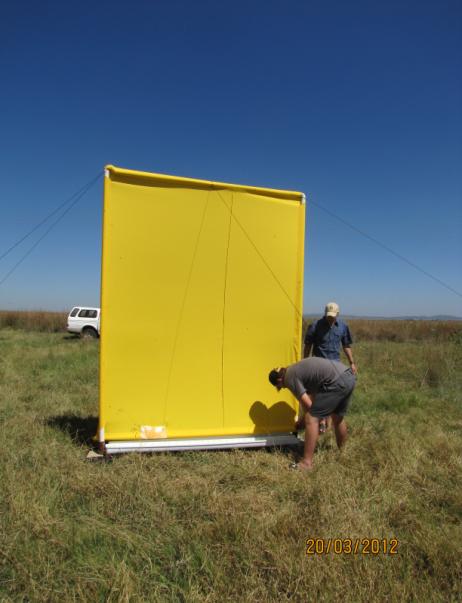 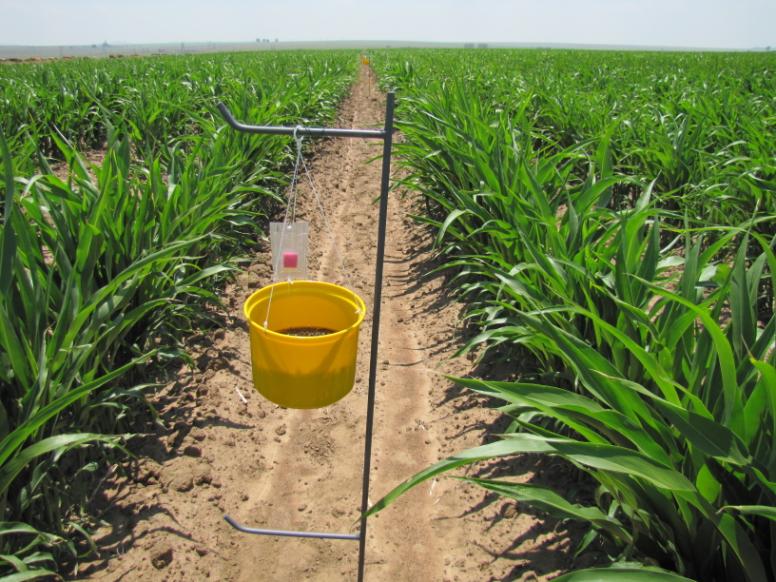