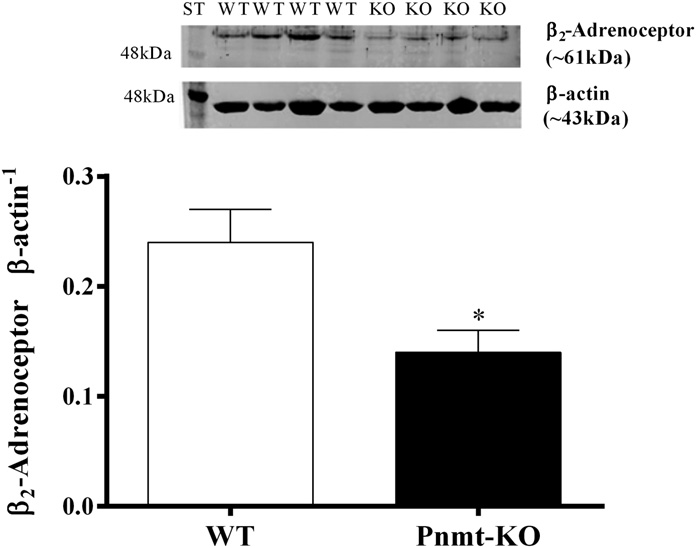 b2-Adrenoceptors in Pnmt-KO Mice Fig. 3. (A) Isoproterenol (b-adrenoceptor agonist) and (B) terbutaline (b2-adrenoceptor agonist) evoked tritium overflow of aortas in Pnmt-KO and WT mice. In Pnmt-KO mice, the curve failed to converge to sigmoidal equation. Each curve point represents the mean of 7 to 8 experiments per group and error bars represent S.E.M. *Significantly different from correspondent values in WT mice (P , 0.05).
the hypothesis that epinephrine is critical for the functional 20712 A (a b1-adrenoceptor antagonist) antagonized the development of b2-adrenoceptor–mediated responses.
effect of dobutamine with similar potency in both groups.
The Pnmt-KO mouse is an epinephrine-deficient mouse Thus, our results suggest that both b1- and b2-adrenoceptors model generated by knocking out the Pnmt gene (Ebert et al., mediate aortic relaxation in WT mice but that only b1- 2004, 2008; Sharara-Chami et al., 2010). The absence of Pnmt adrenoceptors are operative in the absence of epinephrine, mRNA expression alters epinephrine biosynthesis. Accord- as happens in Pnmt-KO mice. This might explain why Pnmt- ingly, we found only baseline levels of epinephrine in the KO mice show normal basal blood pressure values, but blood adrenal medulla and plasma of Pnmt-KO mice. Our results pressure dramatically increases during treadmill exercise agree with those of Sun et al. (2008) showing that epinephrine compared with WT mice (Bao et al., 2007). In Pnmt-KO mice is absent from the adrenal gland and plasma of Pnmt-KO at rest, b1-adrenoceptors may be sufficient to produce mice, whereas the norepinephrine content of the adrenal vasodilation and control blood pressure. One can speculate glands is significantly increased. This result might be due to that under stressful conditions, this mechanism might not be an upstream accumulation of norepinephrine that would enough because b2-adrenoceptor–mediated vasodilator re- normally be methylated to epinephrine.
sponse is blunted, and then blood pressure rises. In In conduit arteries (thoracic aorta and carotid artery) of agreement with this hypothesis is the fact that b2-adreno- mice, both b1- and b2-adrenoceptors mediate smooth muscle ceptor KO mice also have a normal basal resting blood relaxation (Chruscinski et al., 1999, 2001; Rohrer et al., 1999).
pressure and become hypertensive during exercise (Chrus- We chose the mouse aorta because 1) it contains postjunc- cinski et al., 1999).
tional relaxing b2-adrenoceptors, 2) it is easy to mount in the Conversely, we did not observe b3-adrenoceptor–mediated myograph to evaluate b2-adrenoceptor–mediated relaxation, vasorelaxation induced by CL 316243 in WT mice, which is in and 3) it has enough nerve terminals to evaluate prejunc-tional b-adrenoceptor–mediated responses.
Our results showed that dobutamine (b1-adrenoceptor agonist) and terbutaline (b2-adrenoceptor agonist) caused concentration-dependent relaxation of aorta rings precon-tracted with phenylephrine in both WT and Pnmt-KO mice. InWT mice, terbutaline caused aorta relaxation at b2-selective concentrations, whereas in Pnmt-KO mice, very high (non-selective) concentrations of terbutaline were required toproduce relaxation. Actually, the potency and the maximalresponse to b2-adrenoceptor stimulation by terbutaline were lower in Pnmt-KO mice than in WT mice. In addition, the b2- adrenoceptor antagonist ICI 118,551 failed to modify therelaxing effect of terbutaline in Pnmt-KO mice, contrary tothat observed in WT mice. Overall, these results suggest a lossof b2-adrenoceptor–mediated relaxation in the aorta of Pnmt- Q:6 KO compared with WT mice. In agreement with our results is the fact that after adrenalectomy impaired formation of high-affinity myocardial b-adrenoceptor complexes was observed(Davies et al., 1981), and after adrenal demedullationa decrease in b-adrenoceptor cardiac density was observedin rats (Tumer et al., 1990).
Fig. 4. Semiquantification of b2-adrenoceptor protein (∼61 kDa) in On the other hand, no differences were observed in b membrane aorta homogenates, in Pnmt-KO and WT mice. Immunoblot quantification is normalized with b-actin protein. Data shown are –mediated aorta relaxation to dobutamine representative immunoblots; bars represent means of 7–10 experiments between the two groups since the potency and the maximal per group, and error bars represent S.E.M. ST, Western blot protein response to dobutamine were similar. In addition, CGP standard. *Significantly different from correspondent values in WT mice 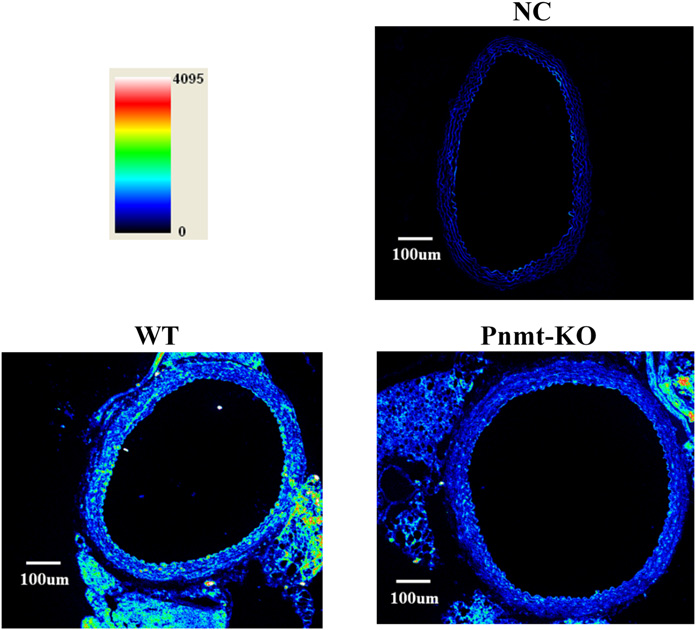