Available online at www.ijntps.org ISSN: 2277 – 2782
INTERNATIONAL JOURNAL OF NOVEL TRENDS IN PHARMACEUTICAL SCIENCES
REVIEW ARTICLE
A Review on Diabetes Mellitus
K.Harikumar*, B. Kishore Kumar, G.J.Hemalatha, M.Bharath Kumar, Steven Fransis Saky Lado Department of Pharmacology, Sri Venkateswara College of Pharmacy, RVS Nagar, Chittoor, Andhra Pradesh-517127 Abstract
Diabetes is a chronic disease that occurs when the pancreas does not generate enough insulin, or when the
body cannot effectively use the insulin it produces. Hyperglycaemia, or raised blood sugar, is a common
effect of uncontrolled diabetes and over time leads to severe damage to many of the body's systems,
especially the nerves and blood vessels. DM can also occur secondary to genetic defects in beta cell function
or insulin action, pancreatic diseases or other endocrinopathies, medications, toxic chemicals, or uncommon
forms of immune-mediateddiabetes, e.g., "stiff man syndrome" or the presence of anti-insulinreceptor
antibodies.
Key words: Diabetes, stiff man syndrome, Hyperglycaemia. 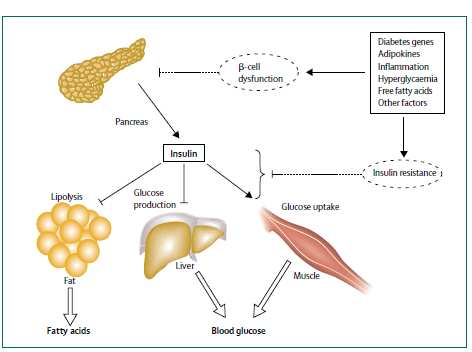 K. Harikumar et al., A review on Diabetes Mellitus glucagon and amylin. They are released in response generally, Normoglycaemia is maintained by the to a meal by enteroendocrine cells in the intestine. balanced interplay between insulin action and Incretin dysfunction, along with other defects, has insulin secretion. Importantly, the normal pancreatic been implicated in contributing to the pathogenesis cell can adapt to changes in insulin action i.e., a of type 2 diabetes mellitus (Campbell et al., 2011). A decrease in insulin action is accompanied by new paradigm of drugs thus have been developed upregulation of insulin secretion (and vice versa). which are based on the actions of the incretins and Figure illustrates the curvilinear relation between are injectable long-acting stable analogues of normal cell function and insulin sensitivity. glucagon like peptide-1 (GLP-1) known as incretin Deviation from this hyperbola, such as in the mimetics. The classic point of view regarding T1DM patients with impaired glucose tolerance and Type pathogenesis was that, in genetically predisposed 2 diabetes in figure , occurs when cell function is individuals, some environmental factors may trigger inadequately low for a specific degree of insulin an autoimmune process that leads to β-cell sensitivity. Thus, cell dysfunction is a critical destruction. In the last 4 decades, a dramatic component in the pathogenesis of Type 2 diabetes. increase in the biochemical identification of islet This concept has been verified not only in cross- autoantigens and in the definition of alleles of sectional studies but also longitudinally in Pima genes associated with diabetes susceptibility was Indians progressing from normal to impaired registered. Nowadays, one considers that genes and glucose tolerance to Type 2 diabetes. However, not environmental factors may have deleterious or only deviation from but also progression along the favorable effects and, consequently, the immune hyperbola affects glycaemia. When insulin action equilibrium is directed towards aggression or decreases (as with increasing obesity) the system protection. It is the time to recapitulate here the usually compensates by increasing cell function. main knowledge we have about the pathogenesis However, at the same time, concentrations of blood of autoimmune T1DM. glucose at fasting and 2 h after glucose load will increase mildly. This increase may well be small, but Pathophysiology of Type 2 Diabetes Mellitus
over time becomes damaging because of glucose To understand the cellular and molecular toxicity, and in itself a cause for cell dysfunction. mechanisms responsible for Type 2 diabetes it is Thus, even with (theoretically) unlimited cell reserve, necessary to conceptualise the framework within insulin resistance paves the way for hyperglycaemia which glycaemia is controlled. Insulin is the key and Type 2 diabetes. hormone for regulation of blood glucose and,
Fig 1. Pathophysiology Of Hyperglycaemia And Increased Circulating Fatty Acids in Type 2 Diabetes