Bitoric Lens Design and Fitting
Stephen P. Smith, B.S. Michigan College of Optometry at Ferris State University Abstract
Bitoric contact lenses are a type of gas permeable (GP) contact lens with two different curves. One curve is on the front surface and the other curve is on the back surface. It is best utilized when corneal cylinder is equal to or exceeds 2.50 diopters. The two curves allow the "saddle principle" to provide an alignment fitting relationship in both meridians. Case Report.
A 20-year-old Caucasian female presented to the clinic noting blurry vision from the dispensed soft toric trial lenses. Upon slit lamp examination, excessive rotation of the lenses was noted OU. We utilized the "left add right subtract" (LARS) principle with different soft toric lenses, but vision remained suboptimal with the patient noting a ghosting effect of the target. After discussing the possible options with the patient, we made the decision to order a trial pair of Art Optical® bitoric contact lenses. Despite some initial discomfort, the patient's vision had improved, remained stable, and no rotation was noted during follow-up appointments. Bitoric lenses are a great option for optical correction in patients with the appropriate amount of astigmatism. The lenses can drastically reduce the amount of rotation seen with soft torics to provide stable vision for the patient. It is important to educate a new GP patient on the transition period for adjusting to lens awareness, wearing and disinfecting schedule, and proper insertion and removal techniques. Key Words: astigmatism, bitoric, contact lens, gas permeable GP contact lenses make up 10% of the contact wearing population and bitoric lenses comprise an even smaller percentage of that population, but still they serve an important purpose for a particular patient base with high amounts of astigmatism.1,2 Toric lenses have two powers in the lens, so keeping the lens stable is imperative for clear vision. Some toric lenses accomplish this with prism ballasting inferiorly or truncation in the lens. Bitoric lenses use the "saddle principle" to maintain stability on the eye.1,3 A saddle fit will establish full alignment to the two principle meridians eliminating any corneal cylinder. GP contact lenses have many advantages over soft lenses. They preserve their shape on the cornea, offer better tear exchange, are more durable, are more resistant to deposit build up, and offer crisper vision.1-4 There are three types of toric GP contact lenses that include front torics, back torics, and bitorics. In most cases of high corneal astigmatism, a bitoric lens design should be used. The primary reason for new GP wearers to discontinue the use of their lenses is due to the initial discomfort experienced.2 Case Report
On August 29th 2012, a 20-year-old Caucasian female presented to the eye clinic with a chief complaint of blurry vision OU. This blurry vision had been present shortly after she began wearing the dispensed trial lenses three weeks prior. Her past ocular history was unremarkable. There was family history of glaucoma with her maternal grandmother, diabetes with her mother, cancer with her sister and maternal grandmother, and hypertension with her father, mother, and maternal grandmother. Hypoglycemia was noted in her review of systems. Her current medications included Tri-Sprintec® and Celexa®, and she had no known drug allergies. The lenses in which blur was noted were Vistakon Oasys Toric®, and the contact lens prescription was -5.50 -2.25X020 OD and -5.50 -2.25X170 OS. The base curve radius was 8.6 mm, and the diameter was 14.5 mm. At that appointment on August 9th, 2012 she reported 20/20 vision OU with the lenses, Slit lamp examination revealed a central fit, 1 mm of movement, ten degree temporal rotation of the lens OD, and no rotation OS. The over-refracion was plano. All other health exam elements were unremarkable. In reviewing her initial exam, we also noted her spectacle prescription to be -5.75 -2.75X008 OD and -5.75 -3.00X175 OS. This spectacle prescription gave her visual acuities of 20/25+1 OD and 20/20-2 OS. Upon taking initial visual acuities on August 29th, 2012 with the Vistakon Oasys Toric® lenses in she reported acuities of 20/100 OD, 20/80-2 OS, and 20/60+1 OU with a ghosting effect. Rotation or instability of the lens was suspected, and slit lamp evaluation confirmed that notion with 25 degrees of rotation temporally OD and 15-20 degrees of rotation temporally OS. The lenses were removed and slit lamp examination showed clear corneas and adnexa, no vascularization, no staining, no scarring, and the anterior chamber was clear. We applied the "LARS principle", and selected a CIBA Air Optix® torics lens of the same sphere and cylinder powers to attempt to improve the patient's vision. After allowing time to settle, she still reported suboptimal vision and slit lamp 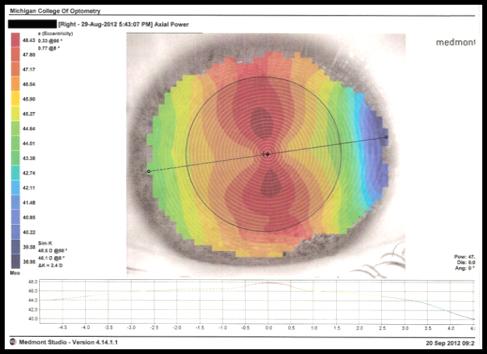 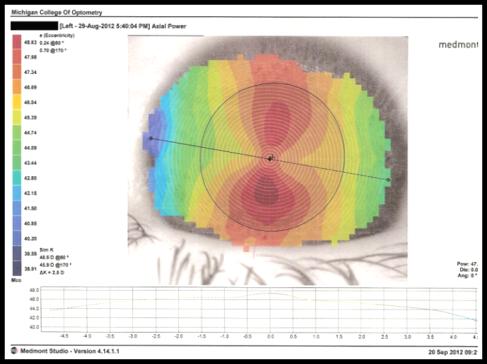 examination showed unstable axis location. We then educated the patient on her refractive correction options. We discussed the use of custom soft toric (ex. Art Optical Intelliwave®), GP (standard or sclera), or trying various brands of soft toric contact lenses. The decision was made to try standard diameter GP lenses. We then discussed the benefits of bitoric GP lenses such as crisper, more stable vision and that they would be more economical long-term due to the ease of maintenance and longer wearing life. We also made her aware that there would be a period necessary to adapt to the increased lens awareness. Topography was then done and showed keratomy readings to be 46.1/48.5 @098 OD and 45.9/ 48.5 @080 OS. Figure 1. Right Eye axial map
Figure 2. Left Eye axial map
depicting limbus-to-limbus With- depicting limbus-to-limbus With- the-Rule astigmatism. the-Rule astigmatism. The axial topographical map revealed with-the-rule astigmatism and it was calculated that nearly all of the patient's refractive cylinder was corneal, so we opted for a spherical power effect fit. This finding along with the amount of cylinder present made her a great candidate for bitoric GP lenses. We empirically fit these lenses using the Mandell-Moore Bitoric Lens Guide rather than using a diagnostic set. Using this method, we ordered an Art Optical bitoric of -5.25/- 7.25 BC: 7.37/7.03 OD and -5.25/ -7.50 BC:7.4/7.03 OS. The diameter was 9.5 and the optic zone was 8.1 OU with Boston EO material. The patient was instructed to return to the clinic to have the lenses dispensed and evaluated in two weeks. 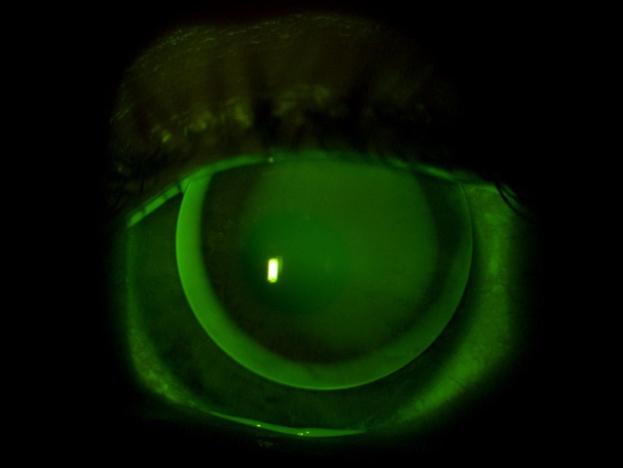 A semi-synthetic organism with an expanded genetic alphabet

A semi-synthetic organism with an expandedgenetic alphabet Denis A. Malyshev1, Kirandeep Dhami1, Thomas Lavergne1, Tingjian Chen1, Nan Dai2, Jeremy M. Foster2, Ivan R. Corre & Floyd E. Romesberg1 Organisms are defined by the information encoded in their genomes, suggest that decomposition is mediated by phosphatases. As no degra- and since the origin of life this information has been encoded using a