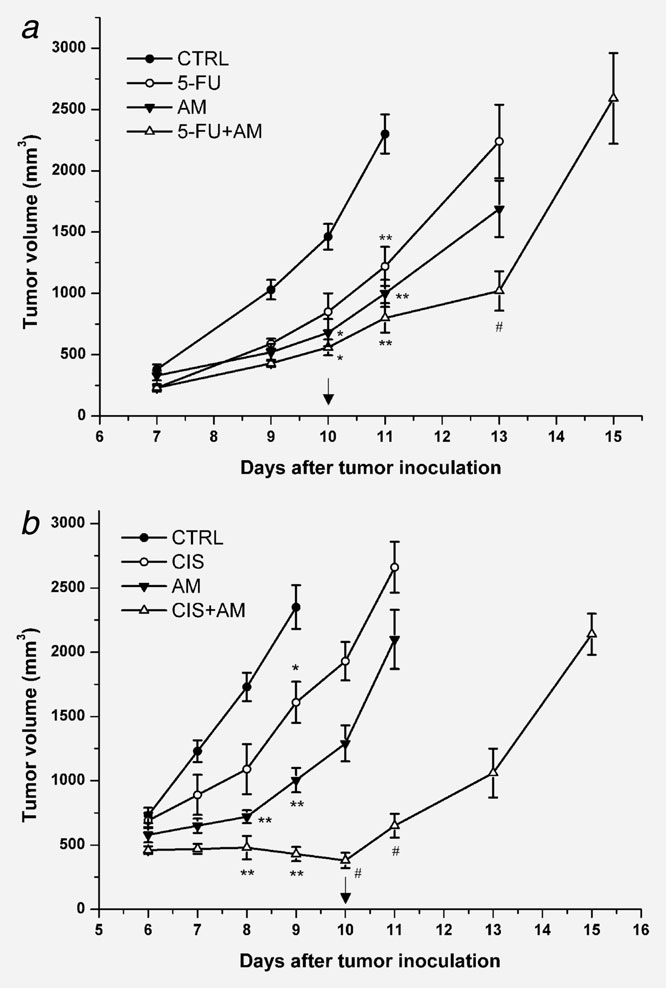 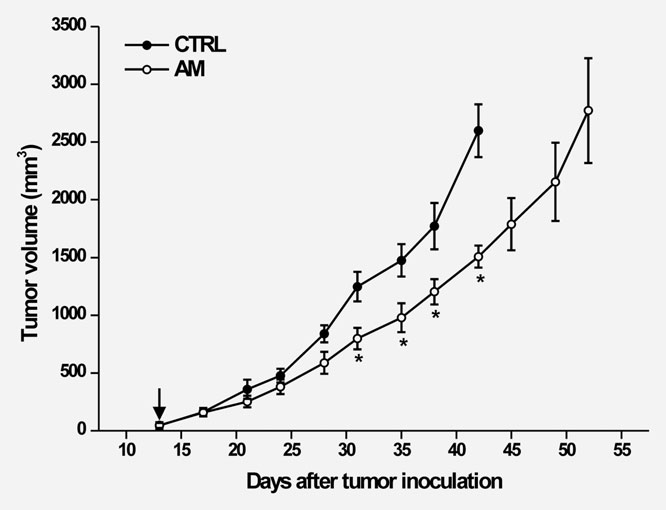 Antitumor effect of a mixture of amino acids and small molecules Figure 1. The tumor growth inhibitory effect of the AM issustainable during the long term treatment of PC-3 xenografts.
Mice were treated with AM started from the 13th day after tumorinoculation (arrow). Error bars represent SEM. *p < 0.05 (Student'st-test).
of the AM and 5-FU produced a 65% TGI (p < 0.001 vs.
control, Fig. 2a). At the end of the treatment period tumorvolumes of the group which received combined treatmentshowed no statistically signiﬁcant difference when comparedwith groups treated with 5-FU alone or the AM alone. How-ever, a sustained TGI was observed in the combined treat-ment group after the termination of treatment, and the dif-ference between the tumor volumes of the group treated with5-FU only and the group which received the combined treat-ment became signiﬁcant.
Figure 2. Combination of the AM with 5-FU or cisplatin increasesthe TGI in the Colon 26 colon carcinoma model. (a) Mice weretreated with 5-FU, with AM, or with 5-FU and AM. *p < 0.05, **p < Combination of the AM and cisplatin increases the TGI in 0.001 vs. control; #p < 0.001 vs. 5-FU (ANOVA). B, Mice were the Colon 26 colon carcinoma model treated with cisplatin, with AM, or with cisplatin and AM. *p <0.05, ** Next we assessed the antitumor effect of the AM in compari- p < 0.001 vs. control; #p < 0.001 vs. cisplatin and vs. AM (ANOVA). Arrows indicate the last days of treatment. Error bars son with cisplatin. Treatment of Colon 26 adenocarcinoma represent SEM.
with AM seemed to produce a higher TGI than cisplatin(AM: 57%, p < 0.001 vs. control, cisplatin: 31%, p < 0.001vs. control), however the difference between these treatment any potential nonspeciﬁc effect we applied a CM correspond- groups was not signiﬁcant. Combination of the AM with cis- ing to the composition of the in vitro used AM in all in vitro platin resulted in a 73% (p < 0.001) TGI (Fig. 2b). It is im- portant to note that signiﬁcant difference was observed In a series of in vitro experiments we have found that between the antitumor effect of the single and combined treatment with AM, but not with CM inhibits the growth of treatments. Moreover, in case of the combined treatment the PC-3 cells and induces apoptosis as evidenced by phosphati- tumor volume decreased during the treatment period, and a dylserine externalization (Supporting Information Fig. S3).
statistically signiﬁcant TGI was maintained even after treat- To correlate our in vitro ﬁndings with the in vivo antitu- ment termination.
mor activity of the AM we performed an in vivo experimentin which we assessed the extent of apoptosis in the tumor The AM induces apoptosis of PC-3 cells both in vitro and tissue with a TUNEL assay. We have found that treatment of PC-3 tumor xenografts with AM produced a 55% TGI at We sought to investigate the mechanism underlying the in the end of the 16 days long treatment period (Fig. 3a), and vivo antitumor activity of the AM. We have selected the PC- the number of apoptotic cells in the treated group showed a 3 human androgen independent prostate carcinoma model 2.5-fold increase compared with the control group (Figs. 3b for further in vitro and in vivo investigations. To rule out Int. J. Cancer: 000, 000–000 (2012) V

Figure 3. Treatment with AM inhibits tumor growth and inducesapoptosis in the PC-3 human prostate carcinoma model. (a) Mice Figure 4. AM activates the mitochondrial pathway of apoptosis in were treated with AM started from the first day after tumor PC-3 cells. (a) Percentage of cells with low DWm as measured by inoculation. Arrow indicate the last day of treatment. Error bars JC-1. *p < 0.05, **p < 0.001 (ANOVA). (b) Percentage of cells with represent SEM. *p < 0.001 (Student's t-test). (b) Representative decreased mitochondrial mass as measured by NAO. *p < 0.001 images of TUNEL assay. Bars represent 100 lm. (c), Percentage of (ANOVA). (c) Western-blot analysis of protein lysates from cells TUNEL positive cells. Data are presented as mean 6 SEM of nine treated with AM or CM. þ Lysate from Jurkat cells treated with 25 sections. *p < 0.001 (Student's t-test).
lM etoposide. Data are presented as mean 6 SEM of threeindependent experiments (panels a and b) or representative ofthree independent experiments (panel c).
The AM reduces the mitochondrial membrane potential(DWm), decreases mitochondrial mass, and activatescaspase-9 increased the percentage of cells with low DWm as measured To study the mechanism of apoptosis induction we investi- by JC-1 (Fig. 4a), and with low mitochondrial mass as meas- gated the effect of AM on DWm and mitochondrial mass in ured by acridine orange 10-nonyl bromide (NAO) (Fig. 4b).
PC-3 cells. We found that treatment with AM signiﬁcantly To further examine the mechanism of apoptosis we Int. J. Cancer: 000, 000–000 (2012) V 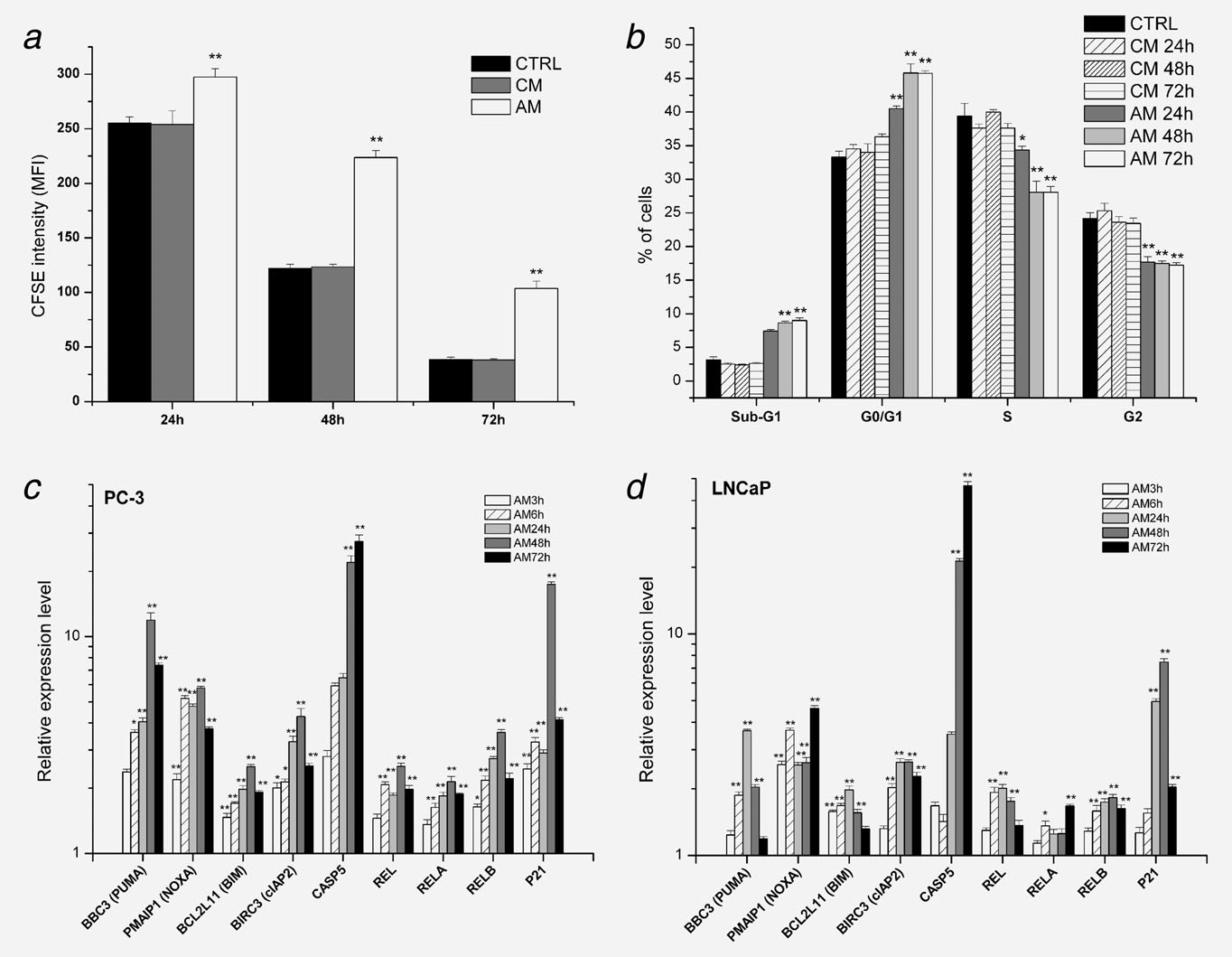 (3) Model Explanation (5) Installation and Storage Conditions The product should be kept in the shipping carton before installation. In order to retain the warranty coverage, the DOP - B 04 S 2 11 HMI should be stored properly when it is not to be used for an extended period of time. Some storage suggestions are: (2) (3) (4) (5) (6)

Lessons from Private Equity How to increase the value of private companies in B.C. Vancouver Private Company Services2011 Edition "Someone's sitting in the shade today because someone planted a tree a long time ago." Private Equity background Lessons from BC's top private equity firms Concluding remarks Appendix A – Participant companies Despite a slow economic recovery over the last couple