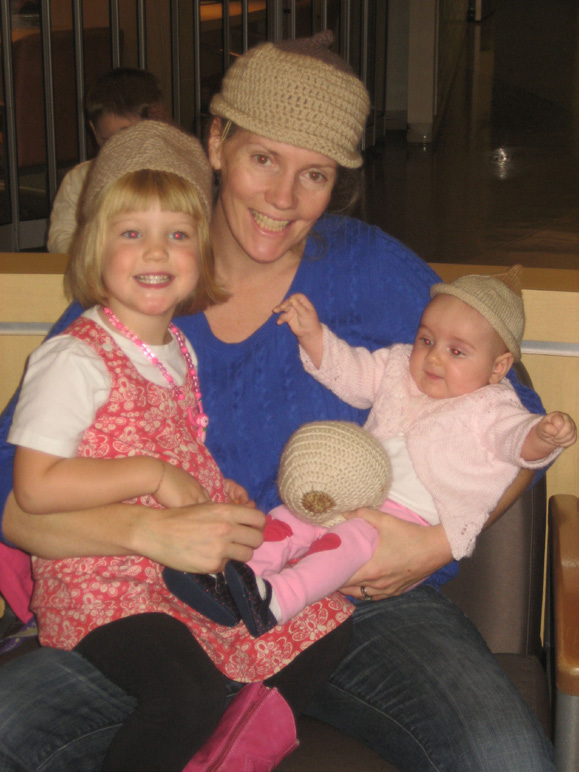 Breastfeeding is Best!
It seems that every year in the summer just before remember being quite shocked to see an old picture of Canadians celebrate World Breastfeeding Week there one of my children bottle feeding when I ‘remembered' is media coverage of something that undermines him as exclusively breastfed.
breastfeeding. This year we seem to have gotten an early start with global media coverage of one American In addition, the study lacked an operational definition study. In the UK, headlines in one paper read "Is of breastfeeding. Babies who breastfed a few times breast really best? New study suggests may be classified as "breastfeed". feeding babies from breast over bottle Differences between them and ‘doesn't have the impact we think it does." their non-breastfeeding siblings are The Globe and Mail, a national Canadian minimized - comparing apples to paper had front page coverage with the apples instead of apples to oranges. headline "Stop feeling so Guilty" printed over an oversized picture of a baby bottle. The Often unreported in the media reporter then outlined an "exhaustive and coverage is the conclusion of the landmark breastfeeding study" which found, paper. The study's authors mention among other things, that when breastfed and the issues that need attention - bottle-fed siblings were compared there was development of social policies that no difference in outcomes.
would enable women to breastfeed, adequate maternity leaves, flexible The study called "Is Breast Truly Best? work schedules, health benefits and Estimating the Effects of Breastfeeding on access to quality child care – all Long-term Child Health and Wellbeing in the involving a comprehensive approach United States Using Sibling Comparisons" to breastfeeding. These issues don't used data from the National Longitudinal Survey of grab headlines – but they should. And yes, breastfeeding Youth (NLSY) to "estimate what a particular child's is best and we need to enable those women who wish to outcome would be." Though sited as an "exhaustive breastfeed their children to be successful in their goals. and landmark study" it has a number of flaws. The data, taken from surveys between 1978 and 2006 was Check out the Academy of Breastfeeding Medicine based on maternal self-report of how their children blog about this study at: http://bfmed.wordpress.
were fed. Retrospective self-reports on activities 7-36 years ago are open to question. As a mother I Check out our Quintessence Foundation Website: www.babyfriendly.ca
Volume #24 - April 2014 World Breastfeeding Week 2014
and welcomed – anytime & anywhere. Truly, the road to lifelong health does begin with breastfeeding.
In Canada, World Breastfeeding Week is celebrated in the fall- the first week of October. Other countries Here are the results of the Challenge for last October. celebrate in August, May and a variety of other dates. The World Alliance for Breastfeeding Action has announced that the slogan and theme for World Breastfeeding Week (WBW) 2014 will be Countries taking part:
"BREASTFEEDING: A Winning Goal - for Life!" The Canada, Ireland, Cyprus, United States, Luxemburg, theme asserts the importance of increasing and Romania, Hungary, South Africa, Bermuda, Ukraine.
sustaining the protection, promotion, and support of breastfeeding in the Millennium Development Goals Sites with the most participant children:
(MDGs) countdown and beyond. The WBW 2014 1. Chilliwack, BC, Canada • To inform people about the MDGs and how they 2. Nicosia & Nicosia Maternity Units, Cyprus.
relate to Breastfeeding and Infant and Young Child 3. St-Jean-sur-Richilieu du bébé Lactéa et Dèfi allatment, Quebec, Canada • To showcase the progress made so far and the key 4. Défi Allatement Mauricle 2013-Center les Rivières, gaps in Breastfeeding and Infant and Young Child 5. Kelowna Breastfeeding Café, BC Canada • To call attention to the importance of STEPPING UP actions to protect, promote, and support 6. Halifax, Nova Scotia, Canada breastfeeding as a key intervention in the MDG 7. Dèfi allatementdu Club des mamans de l'Outaouals, countdown, and in the post 2015 era.
• To stimulate interest amongst young people of both 8. Nourri-Source Montreal-Hotel de ville de Verdun/ genders to see the relevance of breastfeeding in Verdun's Town Hall, Quebec, Canada today's changing world.
9. MMBA and HMHB Austin, Texas, USA10. SMA Parish Hall Wilton, Cork., Ireland Quintessence Breastfeeding
Challenge 2014
The North American 2013 ratings are as follows:
If you haven't participated before, sign up for the Quintessence Breastfeeding Challenge. On October 4, Category A Regions: More than 50,000 births a year
2014 mothers and children around the world will "latch on" at 11am. If you have participated before, you know how much fun this event is. It can be a small affair or a much bigger event – whatever fits for your community. It's a great way to get some media attention and enable Category B Regions: 10,000 to 50,000 births per year
communities to learn about the importance of supporting Gold: British Columbia breastfeeding, particularly public breastfeeding. This year's WBFW theme is a great one to get the message Bronze: Saskatchewan out. It costs nothing to register and it is truly health promotion in action! Register a site at www.babyfriendly.
Category C Regions: Less than 10,000 births per
Breastfeeding Challenge 2013
Silver: North West Territories We were please with the participation in the Bronze: Newfoundland & Labrador Quintessence Breastfeeding Challenge last fall. There were 4,560 children from 10 countries who took part Largest site
on October 5, 2013 in the Quintessence Breastfeeding Chilliwack BC: 162 Challenge. This event has now been offered for 13 years and unfortunately many of the same issues arise year after year. It is wonderful that so many communities Center ler Rivieres 114 take part to emphasize that breastfeeding is normal Volume #24 - April 2014 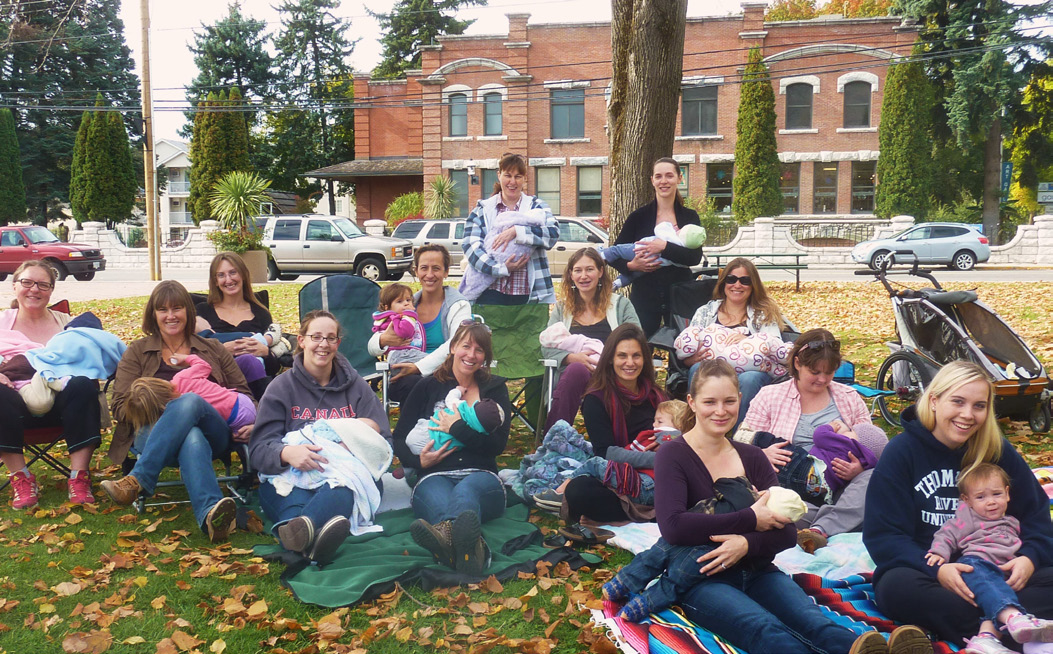 Hope you are all registering for this year and
Also, HMBANA now offers a free electronic newsletter. invite other groups and hospitals to take part
Check out the website at www.hmbana.org for more and support breastfeeding women and donor
information or send an email to [email protected] to get on the email distribution list.
Facebook & Quintessence
Doggrell, S Hancox, J. (2014) Cardiac safety concerns for domperidone, an antiemetic and prokinetic and galactogogue medicine. Expert opinion on drug safety, Yes - we are suffering due to lack of "likes". Please "like Jan13(1) 131-8. This Australian paper involved a review us" on Facebook. Great feedback has come from those of the cardiac risk associated with oral domperidone use who have ‘liked' us so far. Our new page is a business/ including as a galactogogue. The authors concluded that organizational page. When we started on Facebook we excluding mothers who have pre-existing cardiac issues were a "person" because that was all there was - now such as QT prolongations/LQTS, subjects receiving there are organizations and business pages available. drugs that inhibit CYP3A4 (an enzyme found mainly in We look forward to hearing from you via Facebook.
the liver & intestines) and electrolyte abnormalities or other risk factors for QT-prolongation , domperidone can Milk Banking
be used as a galactogogue without direct risk to healthy breastfeeding women. Canada now has three fully operational HMBANA member milk banks– BC Women's Provincial Milk Bank Miracle Milk Stroll
in Vancouver, Calgary Mothers' Donor Milk Bank and the Roger Hixon Ontario Human Donor Milk Bank in Toronto. The 1st International Miracle Milk Stroll is being offered In addition, this spring, Hema Quebec opened the Public in Canada and the USA at selected malls, parks etc. Mothers' Milk Bank which plans to dispense milk to Best for Babes is hosting this event on May10, 2014. NICUs for infants 32 weeks and younger.
Registration is by donation with the option of purchasing a $20 T shirt in aid of increasing the amount of mothers' BC Women's Provincial Milk Bank is celebrating its 40th milk available to high risk babies. There will be strolls in anniversary And, after 40 years, is very busy expanding. Vancouver, Calgary, Edmonton and Toronto. Check out They are planning to start distribution to all four level Best for Babes at http://www.bestforbabes.org/miracle- III NICUs in the province in 2014. In subsequent years donor milk will be available to all the level II NICUs in BC – another eight NICUs. This will mean that pasteurized donor milk will be the standard of care in all NICUs in BC Please feel free to share the newsletter and in the foreseeable future. In the meantime, BC Women's encourage colleagues and friends to sign up for is working on a major awareness campaign to double the newsletter by emailing us at [email protected]
the milk processed and is very interested in talking to ca and "like" us on Facebook! Find us at www.
anyone interested in donating at 604-875-2282.
HMBANA: Human Milk Banking
Association of North America is
Coming!
HMBANA's biannual conference is in Victoria, BC on April 28 and 29, 2014. This a great opportunity, includes the latest information about human milk, human milk banking and a wide variety of breastfeeding issues. There is something for everyone included in the conference with speakers from Sweden, Brazil, Britain, USA and Canada. Attendance at HMBANA conferences has changed the attitudes of many health professionals from neutral or non-supportive to avid supporters of the use of pasteurized donor milk. Encourage key people to Grand Forks, Breastfeeding Challenge 2013!
continued page 4. Volume #24 - April 2014 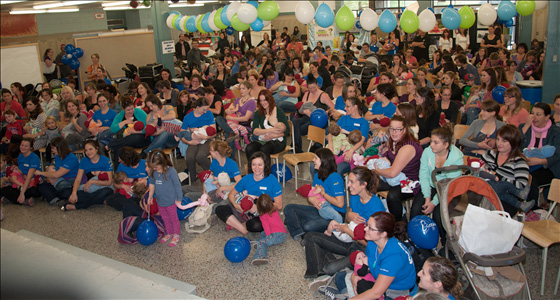 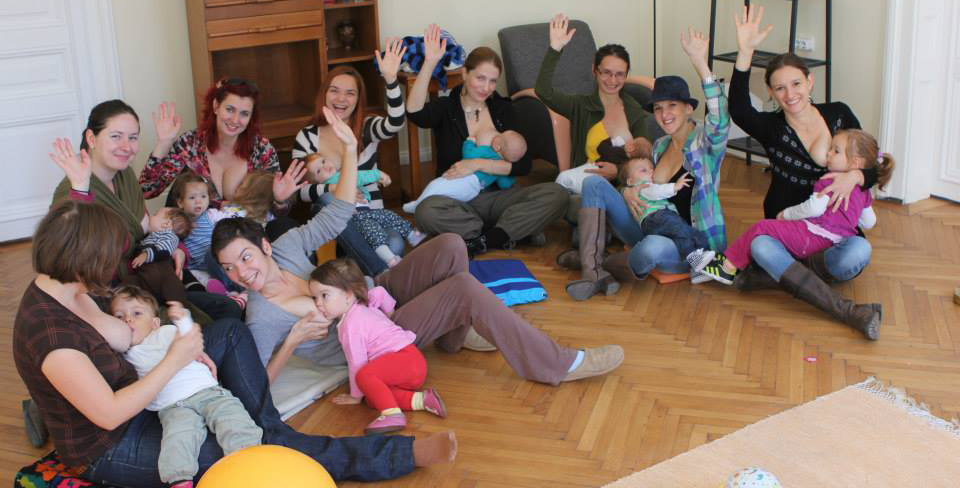 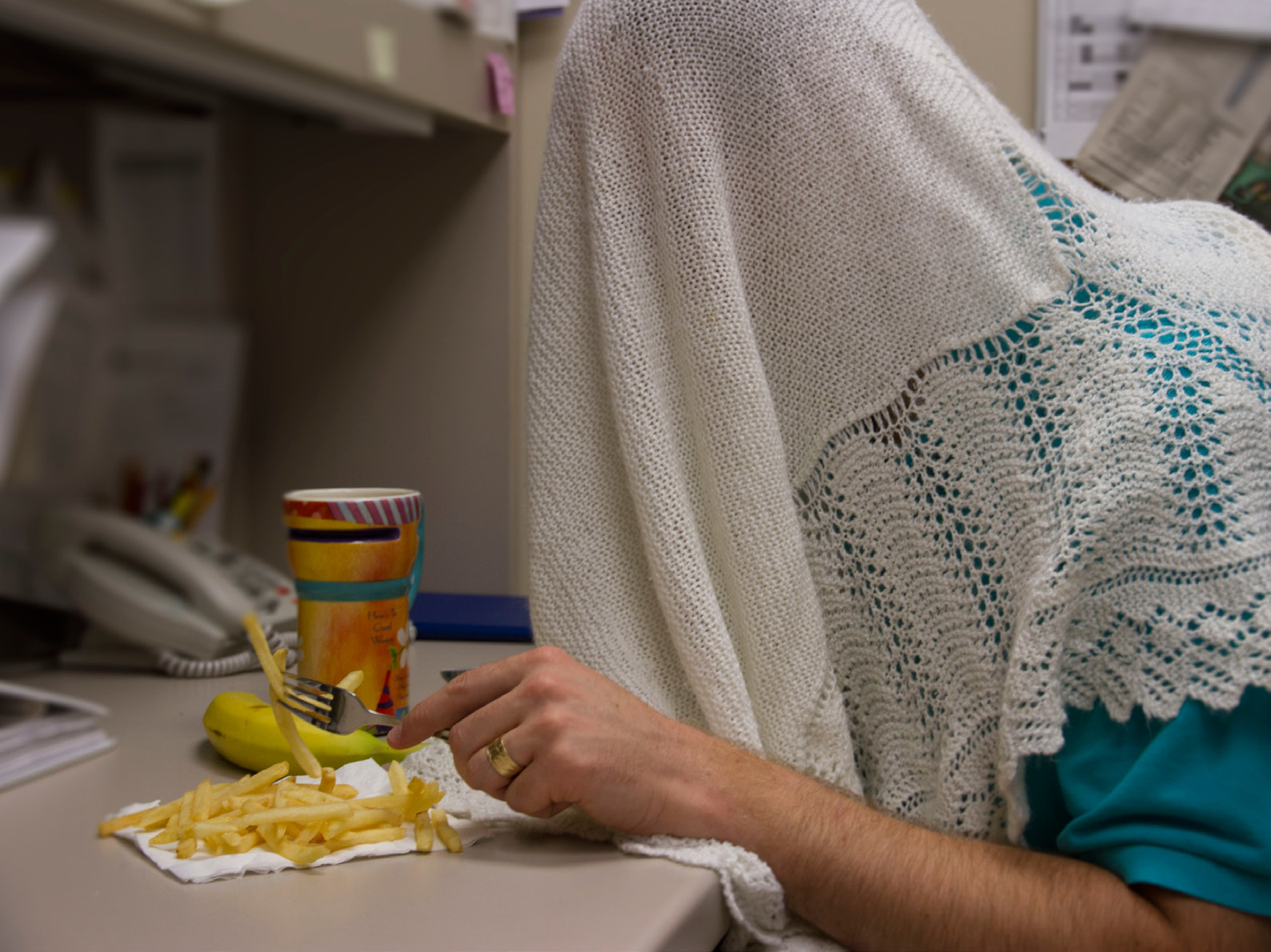 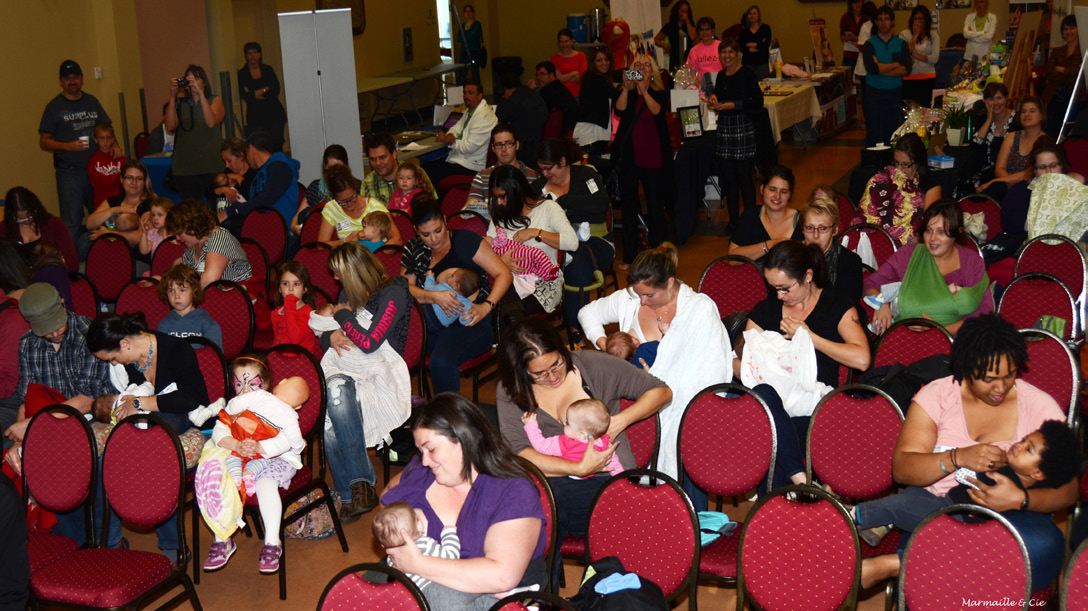 Repentiginy, Quebec 2013
2013 Breastfeeding Challenge!
St. Quentin, New Brunswick breastfeeds!
Romania, Breastfeeding Challenge 2013
You wouldn't want to eat ou wouldn't want to
Poster available
with a baby blanket eat with a baby blanket
over your head
website.
Can be downloaded
from website: under Breastfeeding challenge - Resources-Materials- Promotional-promotional Neither do babies.
Breastfeeding: welcomed everywhere Breast-feeding welc
Neither would a baby
(and anywhere) everywhere (and anywhere).
Volume #24 - April 2014