Analysis and comment An iatrogenic pandemic of panic
Luc Bonneux, Wim Van Damme
Nine decades after the disappearance of the infamous sive food poisoning such as the dioxin crisis. Airborne Spanish flu, its ghost is threatening again. In many transmission of the extremely lethal Ebola Zaire virus countries, panicking citizens are buying drugs from might cause a devastating epidemic and is popular in uncertain sources through the internet for a disease both fiction and (alleged) non-fiction. The HIV super- Department ofPublic Health, that does not yet exist.1 In September 2005, bug appeared in February 2005 in New York as a virus Institute of Tropical Dr Nabarro, the World Health Organization's public with multiple mutations, multiple drug resistance, and Medicine, B-2000, health expert coordinating the response to avian influ- a rapid course of infection, but in only one person. The enza, told the Associated Press that a global avian case served to rekindle the US public's fear after inter- influenza pandemic could kill 150 million people est in AIDS had been waning because of Iraq.
Correspondence to: worldwide.2 What are the risks of a pandemic and is In the Belgian dioxin crisis, dioxins got mixed up stockpiling antiviral drugs the best response? in the food chain, causing levels of exposure to dioxins similar to those in the 1980s.3 The crisis fell conveniently (for the political opposition) just before How real is the risk of pandemic?
an election. Competitors in the highly regulated A new pandemic with a highly pathogenic influenza European food market saw their chance to increase strain is obviously possible. But other infectious agents market shares. Seven million chicken and 60 000 present similar risks—for example, an Ebola epidemic pigs were slaughtered. Not one person has been with airborne transmission, an AIDS epidemic with a detected with any observable consequence of dioxin much more virulent strain of HIV (superbug), or mas- BMJ VOLUME 332 1 APRIL 2006 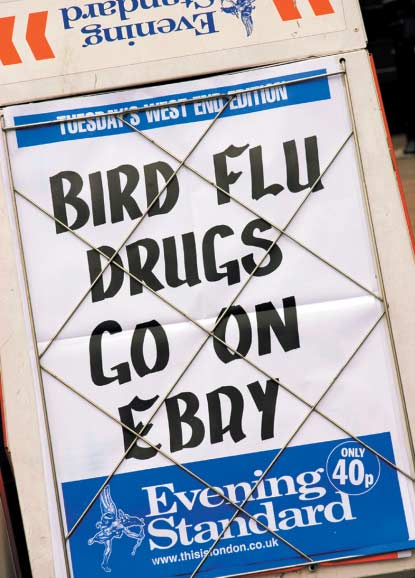