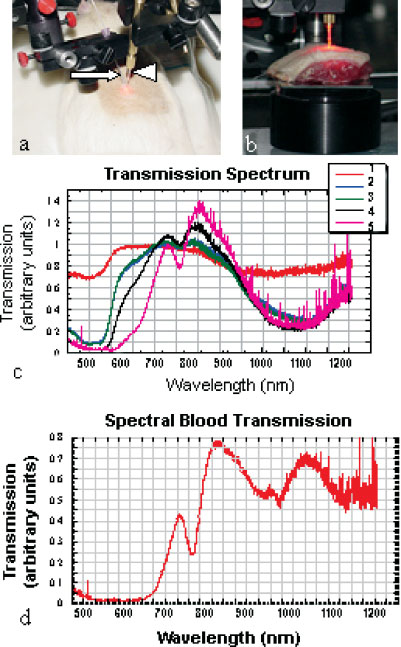 LIGHT PROMOTES REGENERATION AND FUNCTIONAL RECOVERY labeled axons were only found at these distances in thePBM group. The mini-ruby labeled axons in the PBM groupextended an average of 8.7  0.8 mm caudal to the lesion,a significantly increased length over the control group(P < 0.05; Fig. 2f).
Anterograde analysis demonstrates the presence of axons caudal to a transection; however, to determine if PBMpromotes regeneration of transected axons, a double label,retrograde tracing analysis was performed. Based on theanterograde tracing data, axons in the PBM group werecalculated to grow at a rate of 0.25–0.4 mm per day. Thus,axons would require approximately 10 weeks to reach themid-lumbar region and innervate interneurons or motorneurons responsible for lower limb function [69]. At thetime of CST lesion, transected neurons were labeled byinserting HM into the lesion. Ten weeks after CST lesion,axons terminating at vertebral level L3, approximately24 mm caudal to the initial lesion, were labeled by injectingfast blue into the ventral horn. Numbers of single (HM orfast blue) and double (HM and fast blue; neurons withaxons that were transected and regrew to L3) labeledneurons in the motor cortex were assessed using unbiasedstereology. Due to insufficient labeling in two animals andthe deaths of two animals prior to tract tracing analysis, alldata presented for double-labeling assessment is for an n of7 in the control group and an n of 9 in the PBM group.
Analysis of single labeled neurons (HM or fast blue) revealed no significant difference (P > 0.05) between con-trol and PBM groups, demonstrating no difference in label-ing efficacy between groups (Fig. 3a,b,c). The averagenumber of HM labeled neurons is 8,860  3,408 in thecontrol group and 13,270  3,236 in the PBM group, whichis comparable to the number of CST axons reported in thelower thoracic region of the spinal cord [70,71]. The aver-age number of fast blue labeled neurons is 129  109 inthe control group and 131  120 in the PBM group, which iscomparable to the number of neurons found in the motor Fig. 1. Light penetration analysis. a: Photograph of spectro- cortex after injection of a retrograde tracer into the ventral photometric analysis experimental set-up. The smart fiber portion of the CST at vertebral level L4 [70]. Since fibers of (arrow) is inserted below the skin of the rat, the light source the dorsal and ventral CST originate from the same area (arrowhead) is positioned above the skin for transcutaneous of the motor cortex [70] and the lesioning procedure used application of light. b: Ex vivo power analysis, a cross section of in this study transects the dorsal CST but not the ventral the rat's dorsal thoracic region was placed between the light CST, it is likely that these fast blue labeled neurons are source and a power meter. Graphical representation of from the unlesioned ventral CST.
transmission (in arbitrary units) through each layer of tissue Double labeled neurons, with both HM and fast blue (c) or through blood (d), depending on wavelength (nm). Layer labeling, were found only in the PBM group (Fig. 3d,e,f). In 1, skin; 2, loose connective tissue; 3, dense connective tissue; the PBM group, a maximal number of 543 double labeled 4, muscle; 5, vertebral column and spinal cord.
neurons were counted, with an average of 70.5  59.6 forthe entire group. The percentage of double labeled neuronsrepresented a statistically significant increase in compar-ison to the control group (P < 0.05; Fig. 3d). This increasein double labeling indicates that only CST axons in the Analysis of axonal number from 1 to 16 mm caudal to the PBM group regrew and terminated in the gray matter of lesion revealed that there were significantly more mini- vertebral level L3 after transection.
ruby labeled axons in the PBM group than the control group(P Light Improves Locomotor Function < 0.05; Fig. 2g), with an average axonal count ranging from 71.76  17.7 to 120.7  18.5 axons counted per mm. No To determine if PBM resulted in functional improve- significant difference was found between the groups from ment, performance of rats in two functional tests, 10 to 16 mm caudal to the lesion, although mini-ruby the ladder/grid walking test and footprint analysis, was 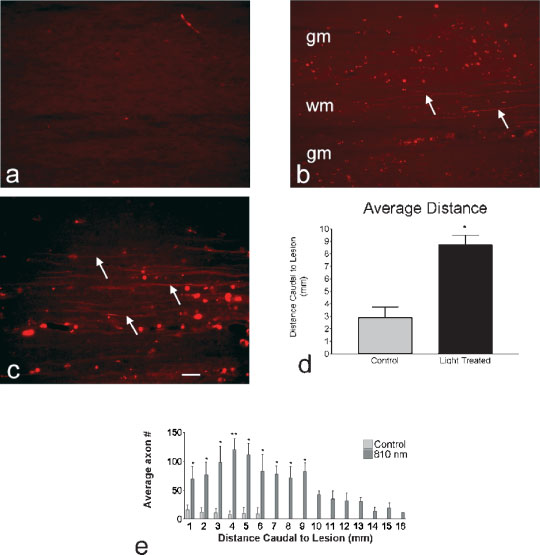 BYRNES ET AL.
Fig. 2. Mini-ruby labeled axons and related quantitation at funiculus white matter (wm) between the dorsal horn gray 5 weeks post-injury. Photomicrograph of two lesion sites (a, b), matter (gm), indicated with arrows, are found at this distance with axons passing around (a) or through (b) the lesion site only in the PBM group. Bar ¼ 23 mm (c, e); 11.8 mm (a, b, d).
(arrows). Photomicrograph of white matter 4 mm caudal to the Comparisons of average axon number/animal (f) and average lesion site in control rat (c) and photobiomodulation (PBM) rat distance caudal to the lesion (g) are shown. *P < 0.05, (d, e). Note that mini-ruby labeled axons in the dorsal **P < 0.001. N ¼ 5/group. Bars represent mean  SEM.
assessed prior to and after CST lesion. Five measurements There was a significant increase in footfalls in both control were taken, including footfalls, time to cross the ladder, and PBM animals post-surgery (P < 0.05; Fig. 4b), but no base of support, stride length, and angle of rotation.
significant difference between these two groups. No signi- One week after CST lesion, rats had significant impair- ficant change was found in stride length or base of support ments in angle of rotation (P < 0.05; Fig. 4a) in the control in either group at any time point after CST lesion (P > 0.05).
group and footfalls (P < 0.05; Fig. 4b) in the control and These functions have been found to be under the control of PBM groups in comparison to pre-surgical measurements.
tracts other than CST, and are not normally affected by An increase in ladder cross time was also observed in both CST lesion alone [11], confirming the specificity of this groups at this time point (Fig. 4c). However, there was lesion model for the CST.
no significant difference between pre- and post-surgicalangle of rotation in the PBM group at 1 week post-injury Light Alters the Immune Response (P > 0.05; Fig. 4a).
To explore the potential mechanism of PBM's effects after At 9 weeks post-injury, angle of rotation remained at the SCI, the immune response within the spinal cord was baseline level (P > 0.05; Fig. 4a,d) and ladder beam cross assessed. Immunolabeling was quantified in order to deter- time had returned to pre-surgical values (P > 0.05; Fig. 4c) mine the invasion/activation of different cell types in the in PBM animals, demonstrating a recovery of these func- spinal cord at 48 hours, 14 and 16 days after SCI.
tions. Control animals had measurements that remained at Due to the clustering of cells surrounding the lesion elevated levels (P < 0.05; Fig. 4a,c,d). Comparison of these following SCI, assessment of numbers of individual cells measurements in PBM and control groups revealed a signi- was not possible. Therefore, measurement of tissue area ficant improvement in the PBM group (P < 0.05; Fig. 4a,c).
occupied by immuno-positive label within a defined target 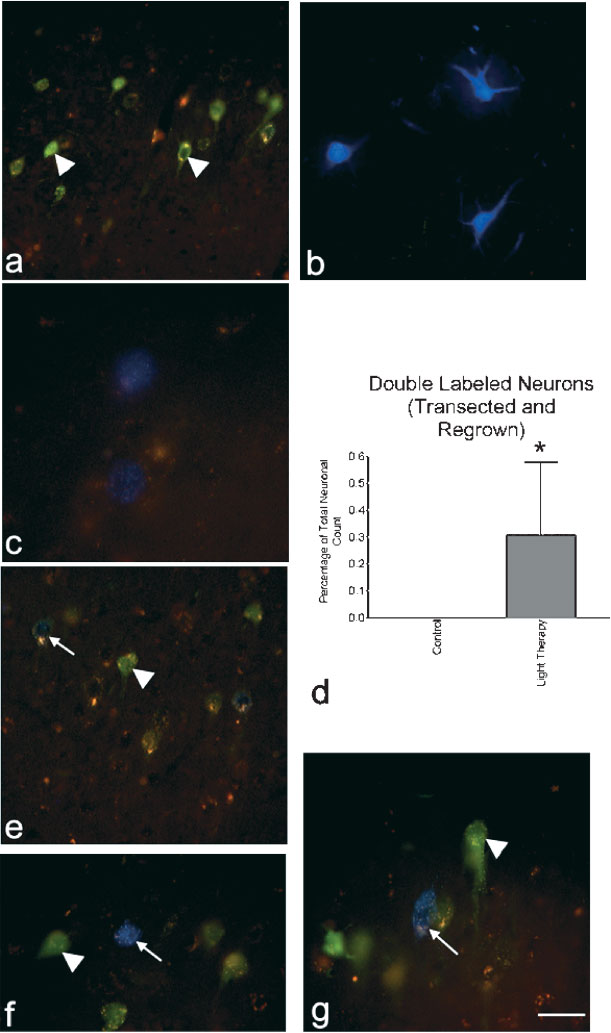 BYRNES ET AL.
space (i.e., within the lesion and adjacent tissue area) wasused to assess cell invasion/activation. As an increase inimmunolabeling does not necessarily reflect an increase incell number, this measurement is a method of quantifyingthe magnitude of a cellular response, both in terms ofcell invasion and activation. The current study does notattempt to distinguish between these two cellular responseparameters.
Macrophages and activated microglia are not distin- guishable from each other in the mammalian CNS sinceactivated microglia express the same cellular surfacemolecules and have the same round morphology as bloodborne macrophages [41,46]. Immunolabeling for ED1, anantibody against a macrophage/microglia lysosomal glyco-protein, revealed many of these large, amoeboid cells in theinjured spinal cord located in and around blood vessels, inthe dorsal roots, along the edges of the lesion site, within thelesion site, and infiltrating into the surrounding tissue at14 DPI and later. At many of the time points, there wereobservably fewer labeled macrophages/activated microgliain the PBM group than in the control group (Fig. 5a,b). Inboth control and PBM groups, ED1 expression was highestat 48 hours post-injury and 14 DPI. Both peaks werereduced in the PBM group, with significant reductionsin ED1 expression at 48 hours and 14 DPI in the PBMgroup (P < 0.001; Fig. 5e). No significant difference betweengroups was found at 16 DPI (P > 0.05).
Astrocytes were detected using an antibody against GFAP, an intermediate filament primarily expressed inastrocytes. At 48 hours post-injury, heavy GFAP positivelabeling was found to demarcate the lesion in all rats of thecontrol group, with GFAP positive processes throughoutthe 10 mm section in three of the five rats (Fig. 5c). PBMtissue, however, had only a light band of GFAP positivelabel near the lesion edge and along the meninges/bloodvessels in all five rats (Fig. 5d). In both groups, immuno-labeling for GFAP decreased over the remaining timeperiods (P < 0.05), although there was a slight increase(P < 0.05) in the PBM group in comparison to the controlgroup at 16 DPI.
T lymphocytes were detected in spinal cord tissue using UCHL1, an antibody against the surface glycoproteinCD45. Cells that were immuno-positive for UCHL1, weresmall, round, and found in very low numbers. T lympho- Fig. 4. Functional analysis. a: Angle of rotation, (b) footfalls,and (c) ladder beam crossing time measurements are pre-sented for pre-injury, and 1 and 9 weeks post-injury timepoints. Graph bars are mean percentage of pre-surgicalmeasurements  SEM. *P < 0.05, repeated measures ANOVAwith **P < 0.05, one way ANOVA with Tukey post-test betweencontrol and PBM group at 9 week time point. N ¼ 10/group.
d: Representative footprints from pre-injury and 9 weeks post-injury. Notice the increased angle of rotation at 9 weeks in thecontrol group. In the PBM group, the angle returns to pre-surgical values. 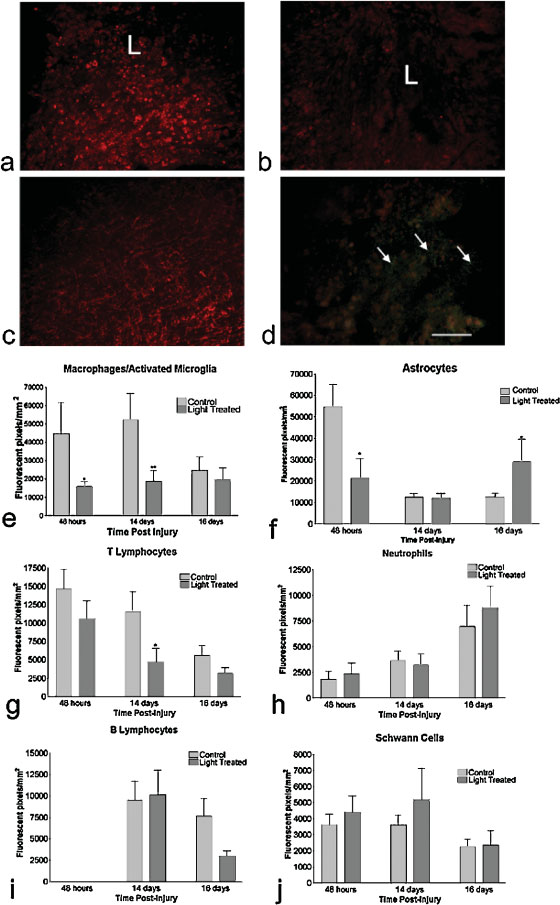 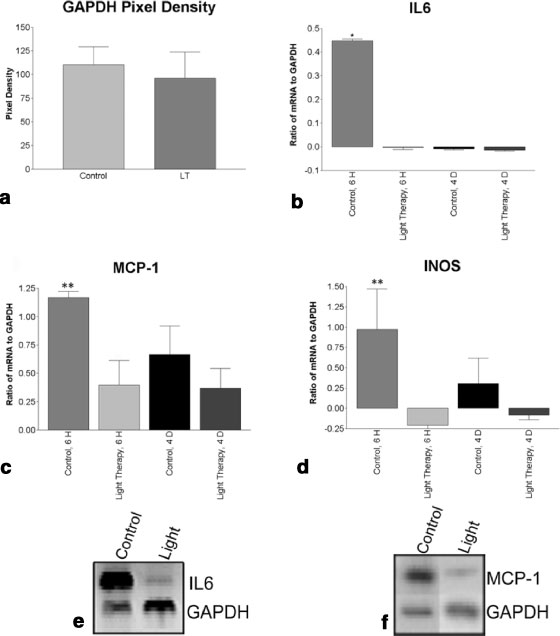