Ittyachen et al. International Journal of Emergency Medicine (2015) 8:6 DOI 10.1186/s12245-015-0054-7 Multi-organ dysfunction secondary to severe waspenvenomation Abraham M Ittyachen*, Shanavas Abdulla, Rifzana Fathima Anwarsha and Bhavya S Kumar Wasp sting is not an uncommon incident. Around 56% to 94% of the population is stung at least once in theirlifetime by a member of the order Hymenoptera which includes wasps, bees, and ants. The response to a waspsting may vary from mild local reaction to severe systemic and anaphylactic reactions. The clinical picture andmortality rate tend to be more severe in adults compared to children. We present a 32-year-old agricultural workerwho was bitten by multiple wasps while on a coconut tree. In spite of the heavy load of venom due to the multiplebites, the patient did not develop anaphylaxis. However, a delayed reaction did occur within 48 h in the form ofsevere multi-organ dysfunction. There was significant improvement by around 2 weeks; but it took another 6 monthsfor the serum creatinine to normalize. This case highlights the occupational risk of Hymenoptera envenomation, thelife-threatening complications that may follow and which may even be delayed as was the case with this patient, andthe value of emergency care and intensive management which can result in a favorable clinical outcome.
Keywords: Wasp sting; Allergy; Multi-organ dysfunction (exact species could not be identified) while climbing a Wasp sting is not an uncommon incident. Wasps together coconut tree. He had developed breathing difficulty and with bees and ants belong to the order Hymenoptera.
generalized swelling immediately after this incident. He Around 56% to 94% of the population is stung by a mem- was taken to a nearby hospital where he was treated in the ber of this order at least once in their lifetime . The re- emergency unit and send home the same day as he felt sponse to Hymenoptera stings are classified as normal ‘better'. The next day, he noticed a decrease in his urine local reactions, large local reactions, systemic anaphylactic output and progressive shortness of breath and hence was reactions, systemic toxic reactions, and unusual reactions referred to our hospital.
[. The most frequently observed are large local and This was a young male who was engaged in agricul- systemic anaphylactic reactions [. In children, around tural work. He had a history of bronchial asthma since 60% of systemic sting reactions are mild, whereas in childhood and used to take albuterol inhalers occasion- adults, systemic reactions tend to be severe in about 70% ally. There was no history of severe wheezing until now.
[. Also, the fatality rate is higher in elderly patients than He neither smoked nor took alcohol and also denied that in children and young adults . Herein, we present taking any illicit drugs.
a young male who had multi-organ dysfunction secondary At arrival in the ED, he was conscious and oriented. He to multiple wasp stings.
appeared jaundiced with multiple swellings predominantlyover the trunk, upper limbs, and head (these swellingslater developed mild ulcerations) (Figures and . There Case presentation was mild tachycardia (110 beats/min) and tachypnea A 32-year-old male presented to the emergency depart- (24 times/min). Oxygen saturation was 92% on room air, ment (ED) of our hospital with breathing difficulty and de- and blood pressure was recorded as 140/90 mm of Hg in creased urine output. One day prior to the arrival in our the right upper limb. The rest of systemic examination hospital, this patient had been bitten by multiple wasps was unremarkable.
Based on a clinical suspicion of multi-organ dysfunction, * Correspondence: Malankara Orthodox Syrian Church Medical College and Hospital, Ernakulam he was evaluated as such. His laboratory parameters were District, Kolenchery, Kerala State 682311, India 2015 Ittyachen et al.; licensee Springer. This is an Open Access article distributed under the terms of the Creative CommonsAttribution License which permits unrestricted use, distribution, and reproductionin any medium, provided the original work is properly credited. 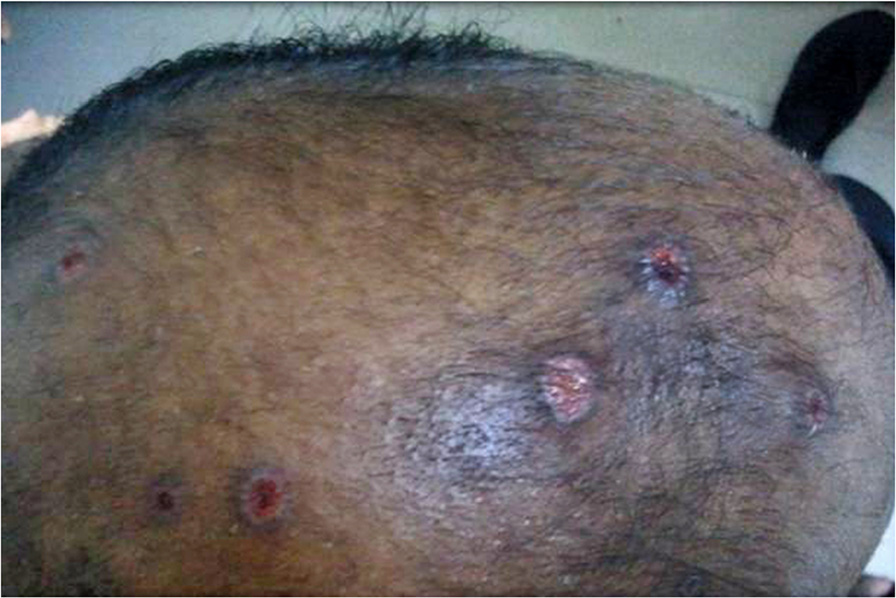 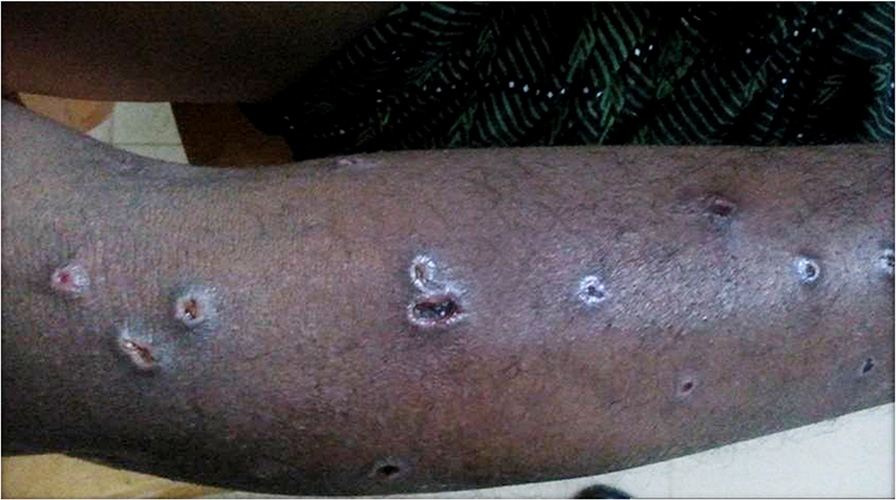 Ittyachen et al. International Journal of Emergency Medicine (2015) 8:6 HIV were negative. Being an area endemic for leptospirosis,the same was also ruled out.
Patient was managed initially in the intensive care unit (ICU). He received intravenous methylprednisolone andantihistamines (pheniramine maleate) for the first 24 h.
He continued to be anuric for the first 14 days and in allreceived 12 sessions of hemodialysis till the urine outputimproved and uremic symptoms subsided. He was alsotransfused 6 units of fresh frozen plasma (FFP) and 4units of platelet concentrate. The rest of the treatmentincluded intravenous fluids, prophylactic antibiotics, oxy-gen, and symptomatic measures. By about 2 weeks, his la-boratory parameters started improving (Figure . By the Figure 1 Ulcerations over the scalp.
end of the third week, he was discharged successfully.
Though urine output had been established, it took an- significant for severe renal failure, hemolysis, rhabdo- other 6 months for his serum creatinine value to myolysis, and liver dysfunction. His blood urea was normalize. Throughout his hospital stay, the patient 126 mg/dL (N: 20 to 40 mg/dL) and serum creatinine was hemodynamically stable and also did not require was 6.1 mg/dL (N: 0.5 to 1.4 mg/dL). His liver enzymes any assisted ventilation.
were also significantly raised: alanine transaminase (ALT)7128 IU/L (N: 5 to 35 IU/L) and aspartate transaminase (AST) 13,985 IU/L (N: 8 to 40 IU/L). Coagulation parame- Hymenoptera sting happens to be an occupational haz- ters were mildly prolonged: prothrombin time 27.2 s (test) ard in many parts of the world as was the case of this and 11.3 s (control) and international normalized ratio patient. The risk for systemic reaction is increased if pre- (INR) 2.47. Though the patient had significant elevation in ceded by a sting within the last 2 months even if the first liver enzymes, he did not have any clinical features of liver sting is well tolerated However, our patient did not cell failure (hepatic encephalopathy). The disproportionate reveal a prior history of envenomation despite the fact rise in liver enzymes together with increased bilirubin that he had an occupational risk. Though the risk for sys- levels (total bilirubin 22.3 mg/dL N: 0.2 to 1.2 mg/dL) and temic reaction is described to be greater in a bee venom- a prolonged prothrombin time was presumably due to sensitized patient compared with those sensitized to wasp rhabdomyolysis and hemolysis/disseminated intravascu- venom , our patient was an exception.
lar coagulation (DIC). A significant rise in the level of The toxic compounds described in wasp venom are lactate dehydrogenase (LDH) corroborated this finding phospholipase A1, hyaluronidase, and antigen 5 [ (LDH: 76,100 IU/L N: 164 to 412 IU/L). Also, his hemogram Other allergens include active peptides like melittin, amines was deranged with the presence of anemia (hemoglobin: like histamine and serotonin, and kinins, apamine, and 8 gm/dL) and thrombocytopenia (platelets: 25,000/mm3).
acetylcholine. Together, they are responsible for the myriad His creatine phosphokinase (CPK) levels were also mark- presentation of wasp sting. The more severe systemic edly elevated - rhabdomyolysis (CPK: 35,029 IU/L N: 0 to complications include renal (acute renal failure, nephrotic 225 IU/L). However, urine did not show any myoglobinuria.
syndrome, and renal tubular acidosis) cardiac Viral markers for hepatitis B, hepatitis C, hepatitis A, and (myocarditis, myocardial infarction, and arrhythmias), hepatic (centrilobular necrosis and pericholangitis), neurological (stroke, Guillian-Barre syndrome, andacute encephalopathy) hematological (hemolysis,DIC, and thrombocytopenia) [and vasculitis Our patient had several of these systemic reactions. How-ever, in spite of the heavy load of venom from the multiplebites, this patient did not develop the classic feature of se-vere anaphylaxis, specifically, anaphylactic shock.
For patients who have an occupational risk for insect envenomation, immunotherapy may be a remedial meas-ure. However, the clinical effectiveness may be question-able not to mention the cost involved, especially forpoor communities. Monoclonal antibody as an adjuvant Figure 2 Ulcerations over the upper limb.
to immunotherapy to increase the effectiveness of such 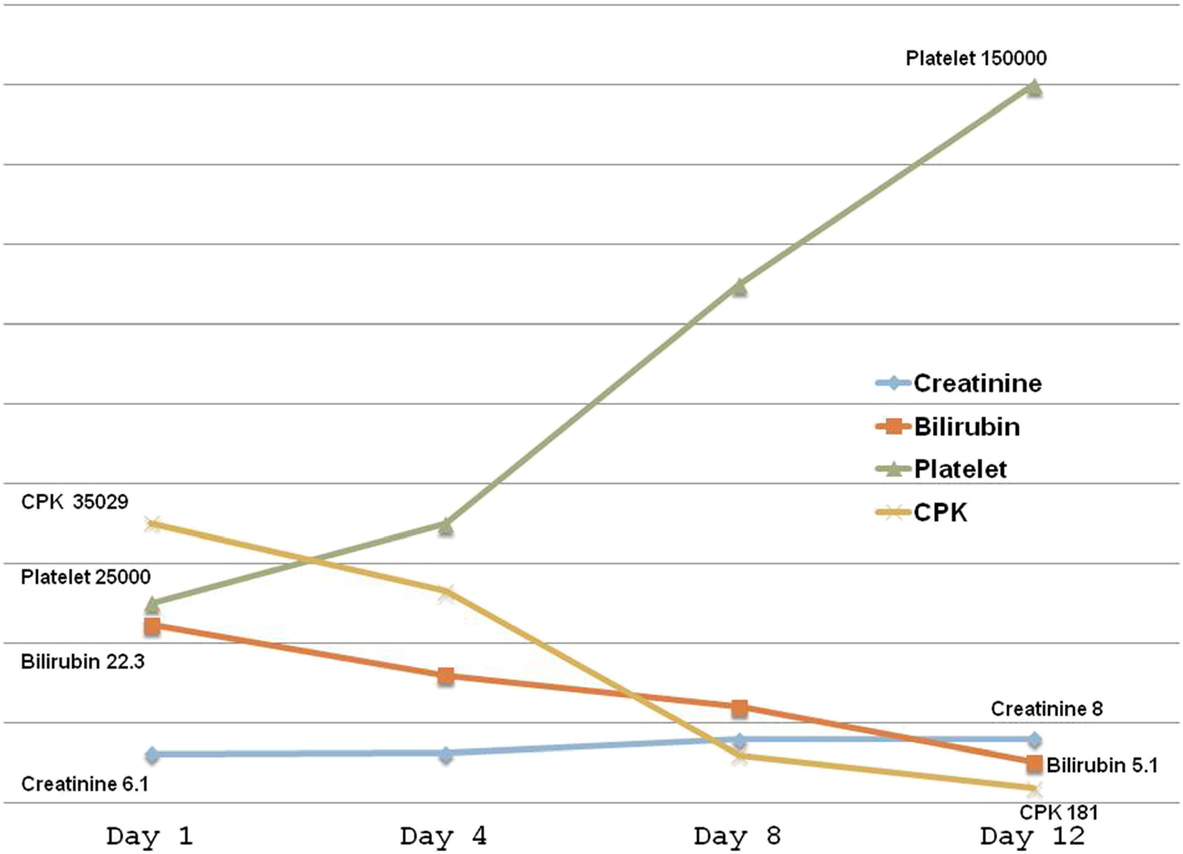 MEDICATION GUIDE QUDEXY™ XR (cue-DEKS-ee ex-arr) Extended-Release Capsules Read this Medication Guide before you start taking QUDEXY XR and each time you get a refill. There may be new information. This information does not take the place of talking to your healthcare provider about your medical condition or treatment. If you have any questions about QUDEXY XR, talk to your healthcare provider or pharmacist.