About division of pharmaceuticals in course of blistering and it's permissibility 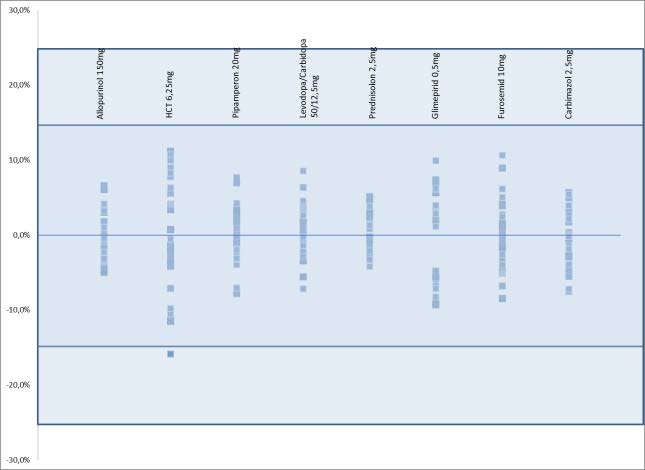 Analytical Studies Dosage uniformity after deviation Each deviation provokes a certain amount of risk of irregular size distribution, which correlates with an oscillating dosage. Hence Ph. Eur. requires a special testing to ensure dosage uniformity. According to the current monograph of Pharmacopoeia, fractions of divisible tablets must fulfill the testing mass uniformity. Of course we investigated tablet fractions of our blistering routine in that content. Testing was performed by an analytical balance PCE AB 200 series with observational accuracy 0.1 mg. For each of the twenty analyzed dosages exists at least one ready-made pharmaceutical on the German market that fully satisfy pharmacopoeia´s requirements, se Figure 1 – Testing of mass uniformity according to Ph. Eur. Deviation referring to fractions mean mass of the eight most frequently divided dosages are il ustrated. Al generic medicaments (not displayed dosages, too) satisfy requires pharmacopeia´s requirement. Content uniformity Although uniformity of mass offers enough evidence for permissibility of tablet deviation, we want to establish proof of content uniformity according to Ph. Eur. 7. For the testing Allopurinol 150 mg, the most frequently blistered dosage, was chosen. After unblistering ten tablets are picked up by chance and blistered via unit-dose procedure. A JV280 blistering machine was used. Afterwards the sachets were stored over 14 days according to pharmacopeia´s specification (maximum temperature 25 °C, maximum relative humidity 60 %) in 18 Testing 2.9.5, Ph. Eur., 2011 Are divided pharmaceuticals in nursing homes replaceable? blistering boxes as secondary packaging for simulating stress maximum on the tablet fractions. Content determination was executed via HPLC based on specifications of Ph. Eur. 7.0.Whereas the following equipment was applied:  Merck-Hitachi L-6200 pump  Rheodyne 7125 feeding valve  Merck LiChrospher 100 RP-18e 250x4 mm chromatographic column  Shimadzu SPD-6 detector, working at 230 nm wavelength Evaluation offers a linear regression, characterized by R=0.9956 and a total y agreement with the requirements of Ph. Eur. 7.0. Determined mean content is 150.9 mg and al measured data match defined limits. Mechanical stability studies The already mentioned contemplation and calculation are applicable only in case of dimensional stability of the fractions. Hence fractions must agree with Pharmacopeia´s friability (Ph. Eur. 7.0/ 2.9.7) and fracture strength (Ph. Eur. 7.0/ 2.9.8) specifications, too. Testing were performed by ERWEKA Tablet Hardness Tester TBH 125 series and Tablet Friability Tester TA100 series. Alongside friability studies according to Pharmacopeia we were focused on tablet behavior towards mechanical stress. No cracked, damaged or broken tablet fraction was observed. 19 Content uniformity 2.9.6, Liquid chromatography 2.2.29 and Allopurinol monograph 7.0/ 0576 Figure 2 – Content determination of Al opurinol fractions with denomination 150 mg 14 days after blistering and storing in sachets. Testing was carried out according to Pharmacopeia. Are divided pharmaceuticals in nursing homes replaceable? Tablet hardness testing confirms that illustration as well. Even though hardness varied substantially between 20 N and over 300 N, depending on direction of loading, it is possible to assure stability over storing period in the corresponding sachets. By the way there are no limits for measured data. Figure 3 – Percentage friability of the eight frequently divided dosages are il ustrated. Al divided tablet fractions (not displayed dosages, too) match the required percentage friability of 1 % (blue line). Open-ended question Majority of the required dosages can be covered by fractioning, but there is a need of more data about a few, mainly coated, pharmaceuticals. Alongside the already mentioned analytical studies it is necessary to focus on dosage accuracy and durability, especially retention of liberation properties. Accordant studies are in progress. 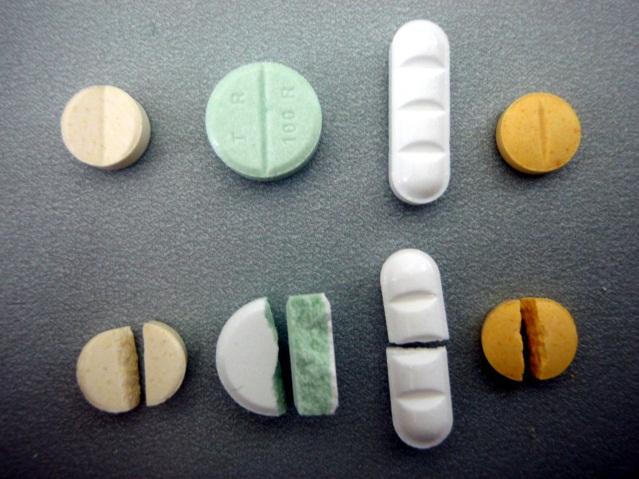 Are divided pharmaceuticals in nursing homes replaceable? Each available study on durability of blistered pharmaceuticals was performed by storing tablets for some weeks in the cassettes before blistering. Therefore shelf life extension of at least one week for divided uncoated tablets is possible, if tablet fractioning takes place immediately after unblistering out of primary packaging. If manufacturer defines a date of expiry it is permissible to reduce durability onto 75.8 % according to surface raise (1/ 1.32 %), see If the following requirements are fulfilled, stability of the tablet fractions is assured:  Uncoated monolithic pharmaceuticals  Stability evaluation and approval of the undivided tablet by the manufacturer  Division immediately after withdrawal out of primary packaging and blistering immediately Figure 4 – Divisible pharmaceuticals. Outer face coloration gives no distinct evidence for a coating. As wel as dichroism, see second one bottom left – matrix based tablet with modified liberation kinetics, is no criterion for exclusion. With reference to an evaluation of former studies (concerning medicinal dosages, unreplaceable by total solid pharmaceuticals of 1,000 patients) three-fourths (71.7 %) of all dosages, accomplished by divided pharmaceuticals, can be supplied. Actual y there is at least one manufacturer, who will be able to fulfill 20 ALUID, 2011; HEXAL, 2012; Novartis, 2012; Ratiopharm, 2012 21 WELLENHOFER, 2010 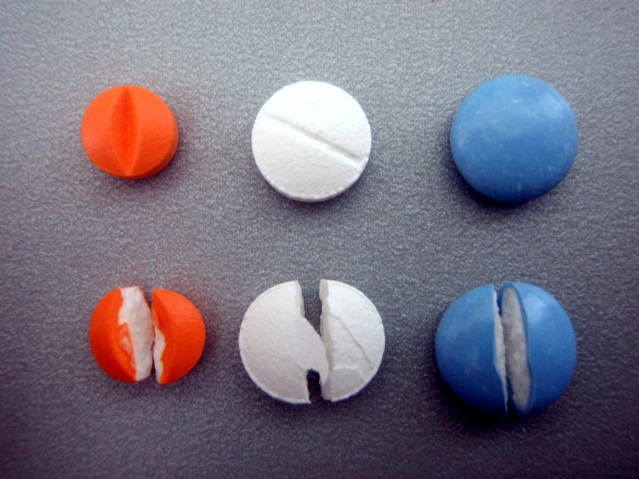