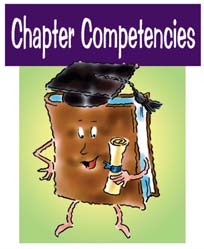 HOW DRUGS WORK
• Differentiate between the local and systemic effects of drugs.
• Describe the roles of absorption, distribution, metabolism, and excretion in treating patients with medication.
• List four reasons why a drug might be contraindicated in a specifi c patient.
• Identify the symptoms of anaphylaxis and angioedema.
• Defi ne synergism and antagonism.
• Explain the interactions that can occur between drugs and foods.
• List four factors that infl uence a drug's effects on the body.
• Practice standard precautions (CAAHEP Competency 3.b.1.e.) • Recognize emergencies (ABHES Competency 4.e.) • Practice standard precautions (ABHES Competency 4.r.) As an important member of the medical team, it's important to understand how drugs treat illnesses and disorders. In this chapter, you'll discover how drugs work inside the body and which factors can cause a drug to be more or less effective. You'll also develop skills to help patients understand what the physi-cian has told them about their medications during an offi ce Chapter 4 How Drugs Work visit, as well as what adverse reactions to look for and how to handle such situations.
Local and Systemic Effects
Drugs are meant to affect the body in one of two ways: DRUGS WITH LOCAL EFFECTS
Drugs with local effects are used to treat one specifi c area of the body, for example: • Lidocaine (LidoPen Auto-Injector, Xylocaine) injection. A dentist may give this medication to numb a patient's jaw before fi lling a cavity in a tooth.
• Lidocaine patch. A physician may prescribe this patch to relieve the pain of shingles.
• Bacillus Calmette-Guérin (BCG) solution. Physicians pre- scribe this medication to prevent and treat bladder cancer tumors. A catheter is used to place the BCG solution into the bladder.
• Corticosteroid creams. Physicians prescribe these creams to counteract infl ammation caused by eczema, a skin rash.
• Sunblocks. These over-the-counter (OTC) medications protect the skin against ultraviolet rays.
• Benzoyl peroxide (Acne-5, Benzac, Desquam-X 10% Wash, Dryox Wash, Exact, Loroxide, Neutrogena Acne Mask). Physi-cians often recommend this OTC treatment to treat mild cases of acne.
• Oxymetazoline hydrochloride (OcuClear, Visine L.R.). These eye drops help relieve dry eyes.
• Atropine sulfate (Atropine-1, Atropisol, Isopto Atropine). Optometrists and ophthalmologists use a form of this drug as eye drops. The drops open, or dilate, the pupil of the eye so the physician can examine the inside of the eye.
• Lindane. Physicians may prescribe this insecticide to treat resistant cases of head lice.
Sometimes, however, a drug will have systemic side effects. For example, BCG immunotherapy can result in lung infec- 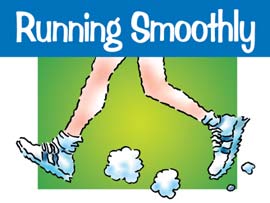 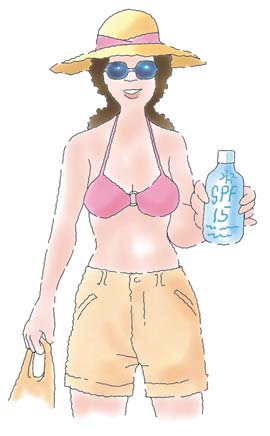 Local and Systemic Effects tion, and lidocaine injections can cause cardiac Sunblock is an example of irregularities. Some medications can have both an over-the-counter drug local and systemic effects, depending on the route with local effects.
of administration.
DRUGS WITH SYSTEMIC EFFECTS
Drugs with systemic effects travel through the blood-stream to reach specifi c body tissues. The body has nine major organ systems. Each system is made up of organs and tissues that work together as a unit. Drugs with sys-temic effects target specifi c systems, although they may have effects on other bodily systems as well. The table on page 108 lists the body's systems and identifi es some drugs that target them.
USING OTHER PEOPLE'S
MEDICATIONS
I know it's inappropriate for one person to take another person's medication, but how do I explain to patients why that is the case? Suppose a patient who wants to save money asks you if it's safe to take medications prescribed for a friend or relative. "After all," this patient reasons, "I have high blood pressure just like my friend does." Of course, you'll explain to this patient that it's not safe for him to take someone else's medications. Each patient's medical history and condition are unique, and medications are carefully prescribed for each individual's unique circumstances. In this case, the underlying medical reason why someone has high blood pressure can be dif-ferent for each person. A drug that helps one person might actually harm another person. For example, some blood pressure medications are diuretics that alter the potassium level in the blood and can cause life-threatening cardiac arrhythmias. Also, a medication that was not prescribed specifi cally for a particular patient may interact with other medications being taken. Advise the patient to speak with the physician about obtaining the medication and dosage that's right for him.
Chapter 4 How Drugs Work Common Drugs and the Body's Systems
Body System
Main Organs
Central nervous system brain and spinal cord eszopiclone (Lunesta)—a sleeping pillhaloperidol (Haldol)—an antipsychoticdiazepam (Diastat, Diazepam Intensol, Valium)—an antianxiety ibuprofen (Advil, Motrin, Nuprin)—relieves pain and swelling Respiratory system lungs and breathing pseudoephedrine hydrochloride (Dimetapp, PediaCare Infants' Decongestant Drops, Sudafed, Triaminic)—relieves nasal congestion albuterol (Proventil, Ventolin)—treats asthmadiphenhydramine hydrochloride (Benadryl, Benylin Cough)—an Cardiovascular system heart, veins, arteries milrinone lactate (Primacor)—for heart failurenitroglycerin (Nitro-Bid, Nitro-Dur, Nitrogard)—prevents and relieves angina (chest pain) isosorbide mononitrate (Imdur, ISMO, Isotrate ER, Monoket)— prevents angina attacks carvedilol (Coreg)—controls high blood pressure (hypertension)warfarin sodium (Coumadin, Jantoven)—prevents blood clots Gastrointestinal system stomach, large and omeprazole (Prilosec, Zegerid)—treats stomach ulcers and acid cimetidine (Tagamet, Tagamet HB)—an antacid furosemide (Lasix)—controls fl uid buildup from chronic heart tolterodine tartrate (Detrol, Detrol LA)—controls overactive hormone-releasing rosiglitazone maleate (Avandia)—treats type 2 diabetes glands such as the somatropin (Genotropin, Genotropin MiniQuick, Humatrope, thyroid, adrenal, and Norditropin, Nutropin, Nutropin AQ, Saizen, Serostim)—a synthetic human growth hormone levothyroxine sodium (Levothroid, Levoxine, Levoxyl, Novothyrox, Synthroid)—a thyroid hormone insulins (Humalin R, Humulin 70/30, Lantus)—decrease blood glucose in patients with type 1 or type 2 diabetes Reproductive system vagina, uterus; penis, ritodrine hydrochloride (Yutopar)—used to stop premature tadalafi l (Cialis)—treats erectile disorderssildenafi l (Viagra)—treats erectile disorders thymus, spleen, lymph amoxicillin (Amoxil, Trimox)—treats bacterial infections tetracycline (Achromycin, Sumycin)—a broad-spectrum pneumococcal 7-valent conjugate vaccine (Prevnar)— immunizes infants and toddlers against pneumonia Musculoskeletal system the muscles and bones alendronate sodium (Fosamax)—prevents brittle bones etanercept (Enbrel)—treats infl ammation and deformity of the joints caused by rheumatoid arthritis 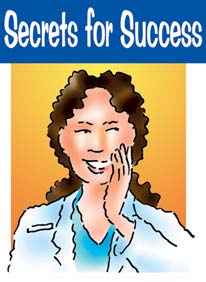 How Drugs Work in the Body How Drugs Work in the Body
The two most common forms in which medications are given are solid and liquid. Drugs in solid form include tablets and capsules that a patient takes by mouth. Drugs in liquid form can be taken by mouth or given by injection.
Drugs taken by mouth (except liquids) go through three phases after they are swallowed.
• pharmaceutic phase • pharmacokinetic phase • pharmacodynamic phase Drugs swallowed as liquids or given by injection do not have to dissolve. They go through only two phases after they are swallowed.
• pharmacokinetic phase • pharmacodynamic phase THE PHARMACEUTIC PHASE—ENTERING THE BODY
Tablets and capsules both go through the pharmaceutic phase.
During this phase, the tablet or capsule breaks into small par-
ticles in the gastrointestinal tract, where it dissolves and releases
the medication into the body.
DO NOT BUY THE "PHARM"
ON THESE TERMS!
Break these pharma- words into parts to help yourself remember what they mean.
pharmaco + kineticpharmaco + dynamic• Pharmaco refers to the drug.
• Kinetic refers to motion and movement. Therefore, pharmaco kinetic means the drug goes where it's supposed to go.
• Dynamic refers to force and power. Therefore, pharmaco- dynamic means the drug does what it's supposed to do. 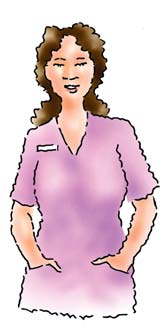 Chapter 4 How Drugs Work During the pharmaceutic phase, drugs in solid form turn Enteric coated tablets into a form the body can take in and use. Drug companies do are less likely to cause a great deal of research to get the pharmaceutic phase right.
an upset stomach.
• Some tablets are made to dissolve, or break up, in stomach acids.
• Time-release capsules and extended-release capsules are made to dissolve very slowly in the stomach.
• Enteric coated tablets do not break apart until they pass through the stomach and reach the intestines. The enteric coating protects them from being dissolved by stomach acids, but allows them to dissolve in the alkaline envi-ronment of the small intestine.
Drugs that are already dissolved do not go through the pharmaceutic phase because they are already in a form the body can use. These medications include liquids that a patient swallows and drugs that are injected into the body.
THE PHARMACOKINETIC PHASE—
ENTERING THE BLOODSTREAM
After a patient swallows a pill or capsule, the medication dis-
solves and then moves into the next phase. That phase is the
pharmacokinetic phase, during which the drug becomes avail-
able for use in the body. Pharmacokinetics refers to activities
involving the drug within the body after it has been adminis-
tered. One reason why injected medications can take effect so
quickly is that they are ready for use immediately as liquids.
Once it's inside the body, a drug goes through four When the body absorbs a drug, it takes the drug into the blood-stream through the walls of the stomach or intestines. The bloodstream carries the drug to the places in the body that the drug is meant to reach and affect.
The body does not absorb every drug with the same speed. The speed depends on how the drug is given.
• Drugs get absorbed fastest when they are inhaled, injected intravenously (directly into the bloodstream), or adminis-tered sublingually (placed under the tongue).
How Drugs Work in the Body • The second-fastest way for a drug to be absorbed into the body is by intramuscular injection, which means by inject-ing the drug directly into a muscle.
• The third-fastest way is by subcutaneous injection, which means by injecting the drug below the skin.
Other factors besides the method of administration affect how quickly a drug is absorbed. Some drugs dissolve faster than other drugs, and conditions inside the body may also affect how quickly a drug can start to work.
The bloodstream carries the drug to the target place, the place
within the body where the drug is supposed to go. Once the
drug reaches the correct site, sometimes only part of the drug is
available to do its job. This is called bioavailability. Portions of
the drug may not be available because they have been bound
to protein in the blood. Sometimes, drugs sent to target areas
are not fat soluble, and they can't cross body tissues around the
brain, placenta, or testes.
If the blood level in the body were reduced, as it would be if the patient were bleeding heavily, the medication might not work. Likewise, if the blood level is too high, the drug may have a harmful effect.
You probably already know one meaning of the word metabo-
lism. It refers to the process by which the body turns food into
energy. Metabolism has another slightly different meaning when
it's applied to medications. When the liver metabolizes a drug,
it takes out all the important chemicals the body needs. These
chemicals are the drug's active ingredients. Then, the liver turns
what is left into inactive substances that the body can get rid of.
Sometimes, the liver can't metabolize a drug fully. Patients who
have liver disease may need lower dosages of a drug.
The liver gets rid of the inactive leftovers of a drug by sending
them to the kidneys. The kidneys get rid of the leftovers in the
urine. The name for this process is excretion.
Some medications bypass the liver and go directly through the kidneys and into the patient's urine. The physician may need to give patients with kidney disease lower dosages of the drug. Physicians may also need to monitor these patients' kid-ney (renal) functions to be sure there is no kidney failure.
Some medications bypass both the liver and the kidneys in leaving the body. These drugs are eliminated from the body 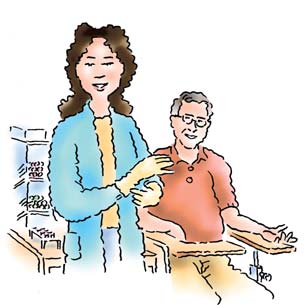 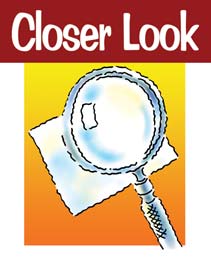