Encapsulation of Amoxicillin within Laponite-Doped Poly(lactic-co-glycolic acid) Nanoﬁbers: Preparation, Characterization, and Antibacterial ActivityShige Wang,Fuyin Zheng,Yunpeng Huang,Yuting Fang,Mingwu Shen,Meifang Zhu,and Xiangyang Shi†State Key Laboratory for Modiﬁcation of Chemical Fibers and Polymer Materials, Donghua University, Shanghai 201620, People's Republic of China ‡College of Materials Science and Engineering, Donghua University, Shanghai 201620, People's Republic of China §College of Chemistry, Chemical Engineering and Biotechnology, Donghua University, Shanghai 201620, People's Republic of China ⊥CQM-Centro de Química da Madeira, Universidade da Madeira, Campus da Penteada, 9000-390 Funchal, Portugal ABSTRACT: We report a facile approach to encapsulatingamoxicillin (AMX) within laponite (LAP)-doped poly(lactic-co-glycolic acid) (PLGA) nanoﬁbers for biomedical applica-tions. In this study, a synthetic clay material, LAP nanodisks,was ﬁrst used to encapsulate AMX. Then, the AMX-loadedLAP nanodisks with an optimized AMX loading eﬃciency of9.76 ± 0.57% were incorporated within PLGA nanoﬁbersthrough electrospinning to form hybrid PLGA/LAP/AMXnanoﬁbers. The loading of AMX within LAP nanodisks and theloading of LAP/AMX within PLGA nanoﬁbers werecharacterized via diﬀerent techniques. In vitro drug release proﬁle, antimicrobial activity, and cytocompatibility of the formedhybrid PLGA/LAP/AMX nanoﬁbers were also investigated. We show that the loading of AMX within LAP nanodisks does notlead to the change of LAP morphology and crystalline structure and the incorporation of LAP/AMX nanodisks does notsigniﬁcantly change the morphology of the PLGA nanoﬁbers. Importantly, the loading of AMX within LAP-doped PLGAnanoﬁbers enables a sustained release of AMX, much slower than that within a single carrier of LAP nanodisks or PLGAnanoﬁbers. Further antimicrobial activity and cytocompatibility assays demonstrate that the antimicrobial activity of AMX towardthe growth inhibition of a model bacterium of Staphylococcus aureus is not compromised after being loaded into the hybridnanoﬁbers, and the PLGA/LAP/AMX nanoﬁbers display good cytocompatibility, similar to pure PLGA nanoﬁbers. With thesustained release proﬁle and the reserved drug activity, the organic/inorganic hybrid nanoﬁber-based drug delivery system may ﬁnd various applications in tissue engineering and pharmaceutical science.
KEYWORDS: poly(lactic-co-glycolic acid), laponite, electrospinning, amoxicillin, sustained release, antimicrobial activity method, drug molecules are directly integrated within the The distinctive features of nanoﬁbers such as ﬂexibility in nanoﬁbers by simply electrospinning the drug/polymer mixture surface functionalities, superior mechanical durability, and solution or by absorbing/assembling the drugs onto the interconnected and readily controlled secondary structures nanoﬁber surfaces or in the interior of nanoﬁbers− aﬀord them to be used as a unique drug delivery system, which Although this method allows easy incorporation of drug has inherent advantages including easy implementation, little molecules within the nanoﬁbers, a burst release often occurs, inﬂuence on the drug activity, and well controlled drug release which is not desirable in most cases.Emulsion and coaxial rate.−Electrospinning is a simple and straightforward way to electrospinning are two improved techniques to be used for produce nanoﬁbers with designed structure and morphol- drug delivery applications, which is able to mitigate the burst ogy.Since Kenawy et al. ﬁrst examined the drug release release of the drug to some extent.In both methods, the property from electrospun nanoﬁbers, the use of electrospun drugs are able to be embedded into the core region of the nanoﬁbers for drug delivery applications has received increasing nanoﬁbers in a reservoir-type model and form a so-called interest in the pharmaceutical ﬁUntil now, a number ofdiﬀerent drug-loading methods have been developed via September 27, 2012 conventional, emulsion, or coaxial electrospinning techni- Accepted: November 6, 2012 ques.−In the conventional single ﬂuid electrospinning Published: November 6, 2012 2012 American Chemical Society dx.doi.org/10.1021/am302130b ACS Appl. Mater. Interfaces 2012, 4, 6393−6401

ACS Applied Materials & Interfaces After being cultured for 8 h or 3 days, samples were rinsed 3 times aggregation of the LAP nanodisks at higher concentrations, with PBS solution and then ﬁxed with 2.5 wt % glutaraldehyde at 4 °C leading to decreased accessibility of the drug molecules to the for 2 h. After that, the samples were dehydrated through a series of interlayer space of LAP. We also note that the optimized gradient ethanol solutions of 30%, 50%, 70%, 80%, 90%, 95%, and loading eﬃciency of 9.76 ± 0.57% may not be the highest 100% and air-dried overnight. The morphology of cells was observed loading eﬃciency; further adjusting the concentrations of LAP, by SEM (JEOL JSM-5600LV) with an accelerating voltage of 10 kV,and the samples were sputter coated with a 10 nm thick gold ﬁlm AMX, and the solution pH is necessary to achieve the maximum loading eﬃciency.
Statistical Analysis. One-way ANOVA statistical analysis was The successful encapsulation of AMX within LAP was performed to compare the cytocompatibility of cells cultured onto conﬁrmed using FTIR spectroscopy (Figure In the FTIR diﬀerent materials and to compare the bacterial inhibition eﬀect of the spectrum of AMX powder (Figure the typical absorption tested materials with diﬀerent AMX concentrations in liquid medium.
bands at 1687, 1519, and 1235 cm−1 can be assigned to the 0.05 was selected as the signiﬁcance level, and the data were indicated amide I, amide II, and amide III bond of AMX, respectively.
with (*) for p < 0.05, (**) for p < 0.01, and (***) for p < 0.001, The weak peaks at 1770 and 1397 cm−1 may be attributed to the vibration of carbonyl group and carboxyl group of the RESULTS AND DISCUSSION AMX, respectively.The peaks at 3180 and 3050 cm−1 areassigned to the stretching vibration of free amino group in the Loading of AMX within LAP Nanodisks. Diﬀerent from AMX structure. The peak of 2960 cm−1 can be assigned to the our previous study related to the use of the lumen of HNTs for stretching vibration for −CH−, −CH −, or −CH drug the interlayer space of LAP nanodisks was structure. In the spectrum of LAP and LAP/AMX nanodisks used to encapsulate a model drug AMX. LAP nanodisks have a (Figure the moderate peak at 1640 cm−1 may be caused by two-dimensional structure with six octahedral magnesium ions the moisture from the atmosphere. The strong peak located at sandwiched between two layers of four tetrahedral silicon 1012 cm−1 can be assigned to the −Si−O− stretching vibration atoms,and the interlayer space of LAP nanodisks has been of LAP naondisks,and the broad peak at 3440 cm−1 may be proven to be used as a reservoir for drug encapsulation.
due to the bending vibration of −OH in the LAP structure. By The loading amount and the loading eﬃciency of AMX comparing the spectrum of LAP with that of LAP/AMX, a new within LAP were determined using the standard concen- peak emerged at 1770 cm−1 in the spectrum of LAP/AMX tration−absorbance (at 230 nm) calibration curve of AMX in suggesting the successful encapsulation of AMX into LAP. Due water and was optimized by changing the concentration of LAP to the quite low amount of AMX encapsulated within the LAP, and AMX, respectively. As shown in Figure an optimized it is diﬃcult to observe some other distinctive peaks of AMXdrug.
The morphology of LAP nanodisks before and after encapsulation of AMX was observed with FESEM (Figure S1,It is clear that the disk-shaped LAPdoes not signiﬁcantly change after the encapsulation of AMX,indicating the successful intercalation of drug molecules withinthe LAP interlayer space. The somewhat aggregated particlesshown in the FESEM images for both samples are presumablydue to the sample preparation method, which includes the air-drying process. As reported in our previous study, the air-dryingof the aqueous suspension of the samples before measurementmay lead to a partial aggregation or interconnection of the Figure 1. AMX loading eﬃciency as a function of AMX concentration The LAP nanodisks are able to form a stable colloidal layered under diﬀerent LAP concentrations.
structure in aqueous solution, which facilitates drug encapsu-lation.The encapsulation of drug within the LAP interlayer loading eﬃciency of 9.76 ± 0.57% could be achieved when the space may result in a change in the interlayer distance,and AMX and LAP concentration was 2 and 3 mg/mL, respectively.
this can be determined by XRD technology. The XRD patterns It is worthwhile to note that the loading eﬃciency decreases of the LAP nanodisks before and after AMX encapsulation were with the LAP concentration, which is likely due to the prone compared, and the data are shown in Figure and Table Figure 2. FTIR spectra of pure AMX (a) and LAP before (Curve 1) and after (Curve 2) AMX loading (b).
dx.doi.org/10.1021/am302130b ACS Appl. Mater. Interfaces 2012, 4, 6393−6401 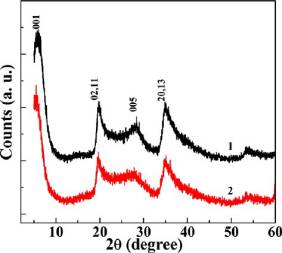 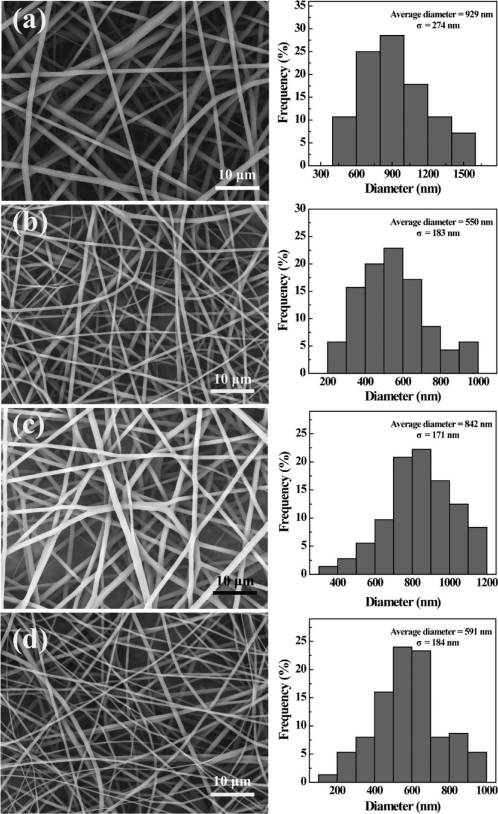 ACS Applied Materials & Interfaces Figure 3. XRD patterns of LAP nanodisks before (Curve 1) and after(Curve 2) AMX loading.
Table 1. Diﬀraction Angle and Plane Spacing Data of LAPand LAP/AMX from XRD Analysis 2θ peak position (o) plane spacing (d, Å) diﬀraction plane (hkl) Obviously, most of the diﬀraction planes at their correspondingdiﬀraction angles do not change, suggesting that LAP is able tomaintain its crystalline structure after AMX The diﬀraction angle of (001) plane shifted from 6.06° to5.50°, and the plane spacing was larger (from 14.76 to 16.26 Å)after AMX encapsulation. This is likely due to the fact that theAMX molecules are intercalated along the 001 plane. Besides,when compared with AMX powder (Figure S2, no diﬀraction peaks of AMX can be detected inLAP/AMX nanodisks, which is presumably ascribed to the factthat the amount of the incorporated drug is too small to bedetectable by the XRD technique. The XRD data suggested Figure 4. SEM micrographs and diameter distribution histograms of that the incorporation of AMX within LAP is primarily via the (a) PLGA, (b) PLGA/LAP (5 wt % LAP relative to PLGA), (c) drug intercalation within the LAP interlayer space. It is also PLGA/AMX (0.5 wt % AMX relative to PLGA), and (d) PLGA/ possible that a small portion of AMX can be adsorbed onto the AMX/LAP (5 wt % LAP relative to PLGA) nanoﬁbers.
LAP surface via hydrogen bonding or other weak forces.
Formation of PLGA/LAP/AMX Nanoﬁbers. The AMX- (929 nm, Figure presumably due to the increase of the loaded LAP was then incorporated within PLGA nanoﬁbers solution conductivity, which was caused by the introduction of (with 0.5% AMX relative to PLGA) via electrospinning to form an anionic or a cationic species in the electrospinning solution.
PLGA/LAP/AMX nanoﬁbers (Scheme As controls, PLGA, Release of AMX from PLGA/LAP/AMX Composite PLGA/LAP (with 5% LAP relative to PLGA), and PLGA/ Nanoﬁbers. The in vitro drug release property of PLGA/ AMX (0.5% AMX relative to PLGA) nanoﬁbers were prepared LAP/AMX composite nanoﬁbers was investigated by exposure in the same manner. The successful incorporation of LAP of the ﬁbrous mats in PBS solution (pH = 7.4) at 37 °C. The within PLGA nanoﬁbers has been conﬁrmed by thermogravi- AMX release proﬁle was compared with those from LAP/AMX metric analysis, transmission electron microscopy, porosity nanodisks and PLGA/AMX nanoﬁbers with similar drug measurement, mechanical testing, and contact angle measure- content (Figure It is clear that the AMX in the LAP/ ment (see also Figure S3, in our AMX nanodisks has a burst release proﬁle and about 97% of the previous work.Here, in this study, SEM was used to encapsulated AMX can be released from LAP within 3 h. In characterize the morphology of the formed electrospun sharp contrast, the AMX release rate from PLGA/AMX and nanoﬁbers with diﬀerent compositions (Figure Similar to PLGA/LAP/AMX nanoﬁbers was signiﬁcantly reduced and our previous studies related to the formation of PLGA/HNTs showed a sustained manner. The release of AMX from PLGA/ composite nanoﬁbers,we were able to form electrospun AMX nanoﬁbers showed a moderate rate on the ﬁrst day, and PLGA/LAP composite nanoﬁbers with a smooth and uniform 31.8% of the AMX was released. Then, the release speed was ﬁbrous morphology even after AMX encapsulation, similar to slowed down, and approximately 100% drug release was the pure PLGA and PLGA/drug nanoﬁbers. The diameters of achieved on the ninth day. The slower AMX release rate from PLGA/LAP (550 nm, Figure PLGA/AMX (842 nm, PLGA/AMX nanoﬁbers than that from LAP/AMX nanodisks is Figure and PLGA/LAP/AMX (591 nm, Figure likely due to the eﬀective hydrogen bonding and electrostatic nanoﬁbers are smaller than that of pure PLGA nanoﬁbers interactions between the hydroxyl, amine, and carboxyl groups dx.doi.org/10.1021/am302130b ACS Appl. Mater. Interfaces 2012, 4, 6393−6401 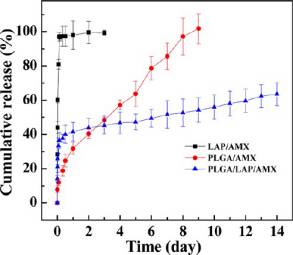 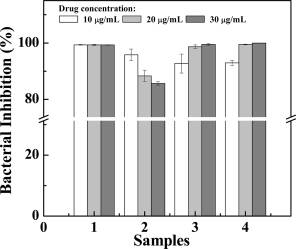 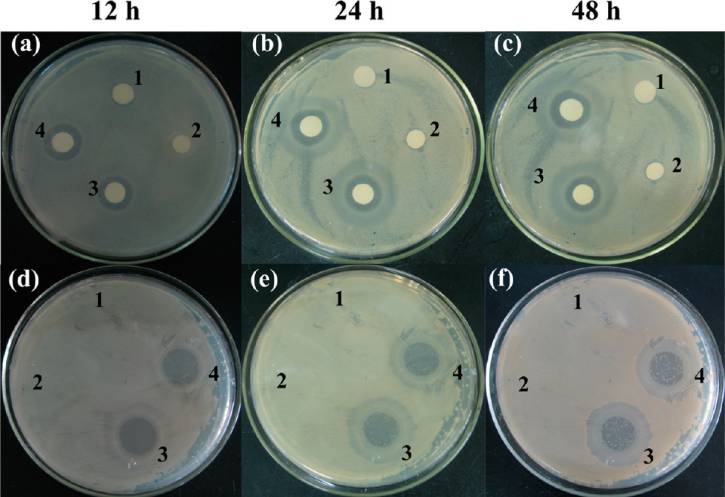