The skinless work group: facing the uncertainty of resting on a void 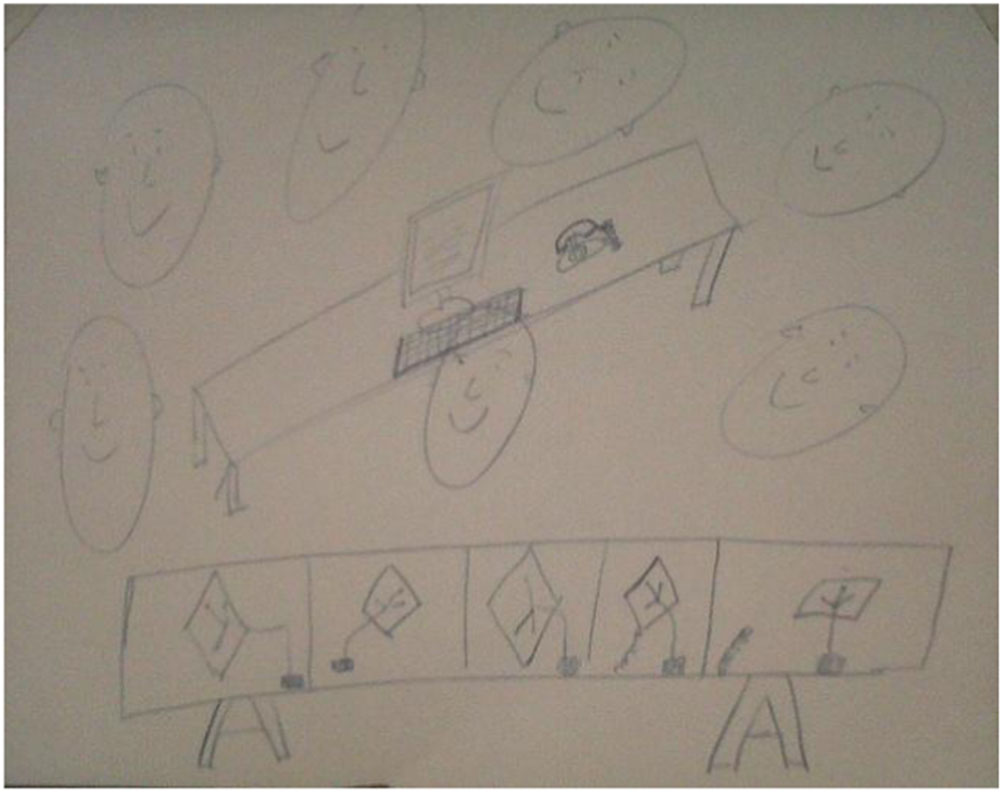 The skinless work group: Facing the uncertainty of "resting on a void" The "Lost" Body and Organizational Disembodiment During the ﬁrst role analysis session, we worked with the drawings of three groupmembers. One of the key dimensions that appeared in the analysis of thesedrawings was the experience of disembodiment that the members experiencedwhen they visualized themselves inserted into the organization. In every case,individual embodiment had a tendency to be diluted in the space (Figure 1),or rather, it was represented through big heads lacking a body to support them(Figures 2 and 3). In this context, the mental dimension appeared hypertrophiedat the expense of those body parts that permitted to integrate the distinctmembers (the body) and also mobilize themselves in the space (the extremities).
For the group, it was very signiﬁcant and distressing to identify with the feeling ofbeing aﬂoat in the air without a material support base, and without extremitiesthat permitted them to mobilize themselves and to undertake actions in adeﬁnite sense.
Figure 1: Flavia's role drawing.
Figure 2: Pedro's role drawing.
Int. J. Appl. Psychoanal. Studies (2015) Copyright 2015 John Wiley & Sons, Ltd. 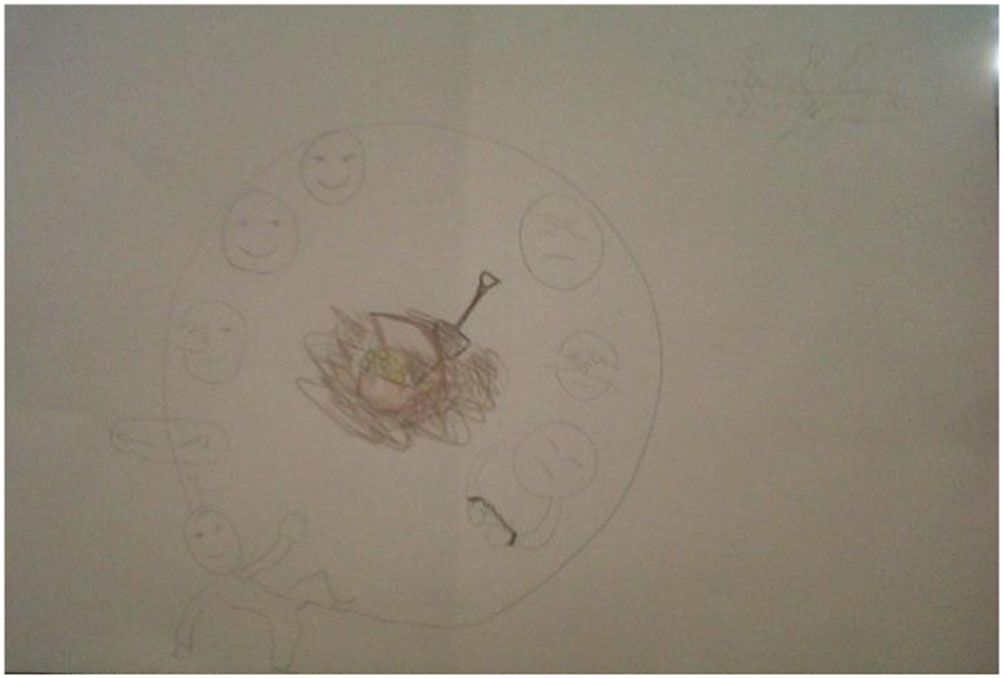 This experience of disembodiment that appeared in the distinct drawings connected them with a reality that was very difﬁcult for them to integrate into,since it showed them exactly the blind spots and the gaps of the primary focusfor a Reichian body therapist: to work with the patient in the integration ofthe stiffened segments of their corporality.6 To identify with the image of the"lost body" was a threatening experience that demonstrated the intenseanxieties of disembodiment that they experienced with their clinical work,which was expressed as much at the individual level as it was at the group level.
In fact, the members constantly made reference to the difﬁculties that they hadtackling the Reichian methods of practice individually, and that therefore, tobe able to adequately implement projects in this ﬁeld required the collaborationof the group as a whole. Nevertheless, all of their attempts to create such a frame-work for collective action had failed irreparably.
Bleger (1970/2002) claims that all organizations tend to defensively reproduce a structure similar to the problem that they have to face, and for which they havebeen designed, which can create high levels of dysfunction in completing the task.
In this context, the group unknowingly generated a social defense system(Menzies, 1960/1989) to protect itself from the complexities that the completionof their shared primary task demanded. The "lost body" was an "emergent"7(Pichon-Rivière, 1970/2003) that demonstrated the precariousness of the group'soperation. Therefore, it was at the level of the collective body in which theanxieties of disembodiment appeared in their most intense form, thus exacerbatingthe action of fragmentation dynamics that overruled the individual and collectivegroup resources.
As shown in Fernanda's drawing (Figure 3), her organization-in-the-mind (Hutton, Bazalgette, & Reed, 1997) is represented by a circle marked by aprecarious boundary that separated the interior from the exterior. Six heads thatillustrated her group mates were in the interior expressing the emotional states Figure 3: Fernanda's role drawing.
Int. J. Appl. Psychoanal. Studies (2015) Copyright 2015 John Wiley & Sons, Ltd. 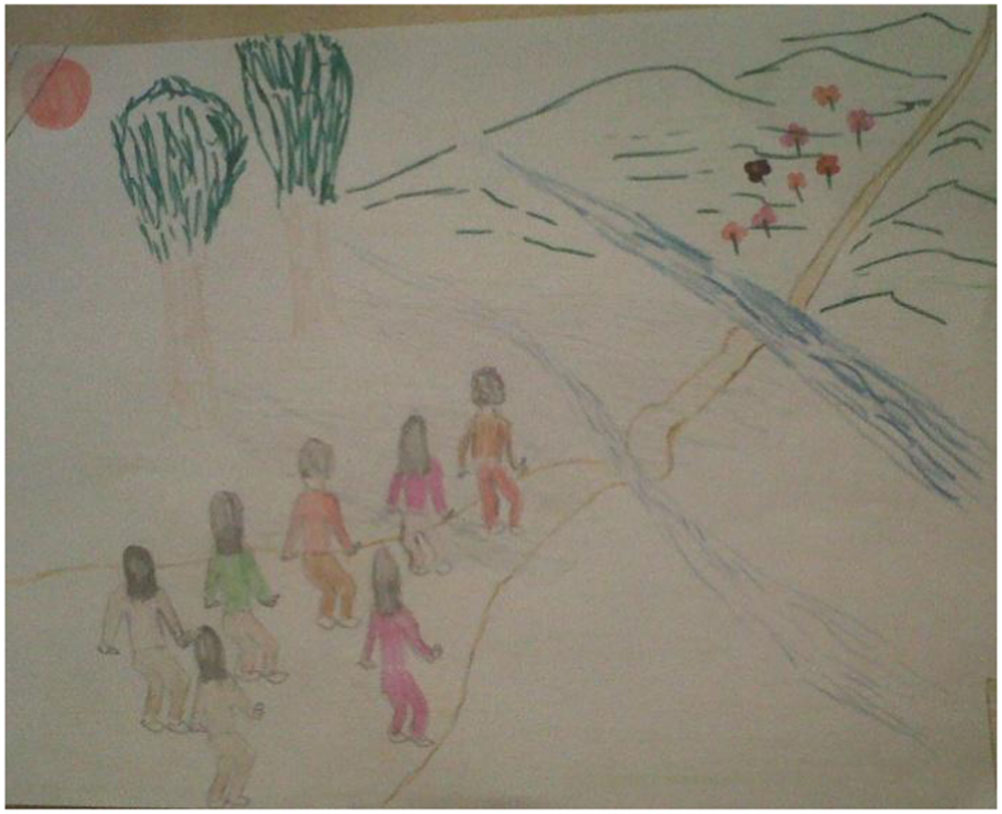 British Journal of Anaesthesia 96 (1): 8–20 (2006) Advance Access publication November 29, 2005 Fluid absorption in endoscopic surgery Department of Anaesthesia, Karolinska Institute, South Hospital, SE-118 83, Stockholm, Sweden Fluid absorption is an unpredictable complication of endoscopic surgery. Absorption of smallamounts of fluid (1–2 litre) occurs in 5–10% of patients undergoing transurethral prostaticresection and results in an easily overlooked mild transurethral resection (TUR) syndrome.Large-scale fluid absorption is rare but leads to symptoms severe enough to require intensivecare. Pathophysiological mechanisms consist of pharmacological effects of the irrigant solutes, thevolume effect of the irrigant water, dilutional hyponatraemia and brain oedema. Other less widelyknown factors include absolute losses of sodium by urinary excretion and morphological changesin the heart muscle, both of which promote a hypokinetic circulation. Studies in animals, volun-teers and patients show that irrigation with glycine solution should be avoided. Preventivemeasures, such as low-pressure irrigation, might reduce the extent of fluid absorption butdoes not eliminate this complication. Monitoring the extent of absorption during surgery allowscontrol of the fluid balance in the individual patient, but such monitoring is not used widely.However, the anaesthetist must be aware of the symptoms and be able to diagnose this com-plication. Treatment should be based on administration of hypertonic saline rather than ondiuretics. New techniques, such as bipolar resectoscopes and vaporizing instead of resectingtissue, result in a continuous change of the prerequisites for fluid absorption and its consequences.