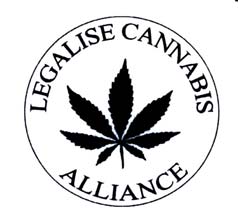 INTERNATIONAL LAW - RISK MANAGEMENT - EFFECTIVE POLICING CRIMINAL JUSTICE A Public Discussion Document Don Barnard & Alun Buffry, BSc. Dip Com (Open) The outcome of the cannabis debate cannot be predicted, but changes to the law must not take place without the most careful consideration of all the issues. You have a legitimate and important role to play - but only if you are willing to ask and address tough questions about the intentions, successes and failures of past and current and proposed efforts. This may require a fresh approach! CONTENTS
• 1. International Treaty Considerations • 2. Elements of Risk • 5. Legalise Cannabis Alliance Principles and Proposals • 7. Bibliography and Associated Reading Promoted, published and printed by The Legalise Cannabis Alliance. PO Box 198, Norwich, Norfolk, NR3 3WB, England.

LEGALISE CANNABIS ALLIANCE PO Box 198, Norwich, Norfolk, NR3 3WB, England http://www.lca-uk.org
If society is to achieve any success in its effort to reduce personal and social damage through drugs use,
we must continually re-examine our own understanding and attitudes to drug use, misuse and abuse. It is
worth noting that the overwhelming majority of those who use cannabis are not "problem users" and
"normal" use ought not be labelled as "abuse".

We also need to examine the successes, failures and costs of past and present control regimes.
Can we really justify punishing people for cannabis possession or growing a few plants when
clearly neither individual nor society benefit through the prosecutions?
How does the implementation of law conflict with Human Rights, harm minimalisation and
good policing?
Above all it is essential to instigate a continuing dialogue between government, drug agencies,
police AND users.
We need to create a just and workable legislation that reduces harm from drugs without
infringing upon personal privacy and the rights to choose ones own lifestyle and beliefs.
We need legislation that is aimed at PROTECTION, not control.
To achieve this, we encourage:
a) A truly open and honest dialogue among professionals, government, the public and the cannabis using
community,
b) Meaningful discussions on whether it would be preferable to have a system of licensed cannabis retail
outlets incorporating all necessary quality control and harm reduction provisions, rather than criminal
supply chains that seem unstoppable,
c) Discussion between Government, employers and workers representatives (TUC) on the value,
reliability, cost and the need for universal testing for recent past cannabis use.

2.4(2) "Cannabis is remarkably safe. Although not harmless, it is surely less toxic than most of the
conventional medicines it could replace if it were legally available. Despite its use by millions
of people over thousands of years, cannabis has never caused an overdose death." Lester
Grinspoon, MD, Harvard Medical School.
In spite of all the efforts to prove otherwise, medically, socially and even chemically it would be
hard to find a substance safer than cannabis. A small minority of people do suffer some negative
effects when using cannabis, but this number is extremely small. Some people may experience
unwelcome effects. If this happens they should stop using it. Cannabis is unique among
intoxicants in that all harmful effects are reversible on cessation of use. The biggest health RISK
for cannabis users is not that cannabis per se is harmful, but maybe the way cannabis is used in
combined with tobacco. Those using cannabis-tobacco combinations experience the effect of two
drugs. People are introduced to tobacco from smoking joints. Smoking tobacco on its own
doesn't give the same experience. [9, 10, 11]

• That cannabis and cannabis products should be removed from the UK Misuse of Drugs Act, thereby
being legalised. • That the possession, cultivation and use of pure cannabis and cannabis products be free from • That cannabis be re-introduced into our society. • That high priority be given to the cultivation of cannabis for the express purpose of the localised production of virtually cost-free fuels through the process of pyrolysis on cannabis biomass, and as a source of fibre and hurd. • That provision be made to enable the setting up of public establishments where the use of cannabis is • That provision be made to enable the setting up of outlets for the legal supply of cannabis. • That at least the same level of protection be given to the cannabis consumer as is given to the consumers of other commodities: weights and measures, quality etc. • That all prisoners presently held only on cannabis convictions or charges be released from custody without delay and that all criminal records for cannabis offences be expunged. 6. RECOMMENDATIONS - CONSULTATION
The risks and damage created for the cannabis user through the law itself outweighs the risks of using cannabis itself. The law fails to control quality or source of supply and continues to alienate large sections of society, leaving millions of people of all ages to the agendas of criminalised suppliers, some of whom may expose cannabis users to hard drugs and criminal activity. Legislation ought to be directed at protection, not control, with help and safety advice available when required. There is a powerful argument for allowing the introduction of "cannabis cafes", similar to the Dutch model that has successfully reduced drugs harm in Holland. Any future cannabis legislation ought to incorporate the interests of society and the individual, and be based upon the principles of international law, risk management and effective policing. We recommend that Government establish a forum involving cannabis (drug) users as well as criminal justice employees and drug agencies. "Penalties against a drug should not be more dangerous to the individual than the use of the drug itself; and where they are they should be changed. Nowhere is this more clear than in the laws against the possession of marijuana." President Jimmy Carter REFERENCES AND ASSOCIATED READING